John Emsley, University of Cambridge, takes you on a tour of the Periodic Table. In this issue: Technetium, so unique, so useful, so universal 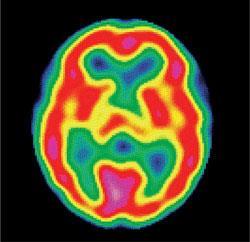 Healthy brain scan using technetium-99m. Here the brain activity is colour-coded, from red (most active) through yellow to green and blue (least active).

Despite all its isotopes being radioactive, this element is used around the world to save lives. It is injected into tens of millions of people every year to diagnose difficult-to-detect cancers. (It poses no long term threat to those being treated because technetium is quickly eliminated from the body.) The isotope used is technetium-99m and this is produced from molybdenum-99, which itself is made by bombarding uranium-235 with neutrons.

Technetium-99m was mainly made at a plant at Chalk River, Ontario, Canada, but this unexpectedly ceased production in 2009 as a result of a power blackout which affected production for several weeks. Because molybdenum-99 has a half-life of only 67 hours there was a real risk that global demand for technetium would not be met. Today other countries like Holland, South Africa, and Argentina are also producing it.

Technetium-99m has a half-life of six hours and emits only gamma-rays as this isotope isomer reverts to technetium-99. (Technetium-99 itself has a half-life of 211 000 years.) The medical diagnostic technique is known as immunoscintigraphy which involves its being incorporated into a monoclonal antibody that binds to cancer cells. By mapping the gamma-ray emissions, it is possible to diagnose the affected sites. The method is especially useful in highlighting cancers in the intestines, kidneys, brain, and bones.

Technetium-99m is not used only in cancer treatments. When a colloidal suspension of technetium-99m and tin is injected into the body it binds to red blood cells and so can be used to map malfunctions of the circulatory system. When it is accompanied by a diphosphate ion it binds strongly to the heart muscle and this can be used to assess the damage done by a heart attack.

The longest lived technetium isotope is technetium-98 with a half-life of 4.2 million years. However, this was not long enough for the technetium, which was present when the Earth was formed 4.57 billion years ago, to have survived to the present day. Nevertheless, technetium has turned up in some most unlikely places in the universe, namely red giant stars.

In 1952, Paul Merrill, an astronomer at the Mount Wilson and Palomar Observatories in California examined the light given off by such stars, and it clearly showed technetium was present in abundance. Since all isotopes of technetium are relatively short lived compared to the age of stars, and especially red giants which are at the end of their lives, it could only mean that this element was continuously being formed within the star itself. This proved conclusively that stars were the furnaces where the chemical elements are manufactured.

Technetium occupies the place below manganese in the periodic table, and it long tantalised chemists because it could not be found. Those who claimed to have discovered it and gave it names like davyum, lucium, and nipponium, were mistaken. Technetium only came to light in 1937 when Emilio Segr? at the University of Palermo in Sicily separated it from a sample of molybdenum. He obtained this from the University of California when he visited their cyclotron laboratory in 1936 and where this metal had been exposed to various high energy particles.

Technetium does occur naturally in the Earth's crust, being formed by the nuclear fission of uranium atoms, but the amounts are minute. It was identified in the uranium ore pitchblende in 1962 where it is present at a concentration of 0.2 micrograms per tonne. Today there is much more of this element around because it is produced in nuclear reactors, but this only adds to the planetary burden of unwanted radioactive waste. So far, nuclear reactors have produced about 80 tonnes of the metal while above-ground nuclear weapons testing from 1945 to 1980 created and released about a tonne of technetium to the environment.

Apart from medical and scientific research uses, technetium finds few commercial outlets but it has one remarkable ability. The best way to protect steel that is in contact with aerated water is to dissolve a little potassium pertechnetate (KTcO4) in the solution. As little as 55 ppm is sufficient to prevent any corrosion, even when the system is under pressure and the temperature is 250o C. Remarkable as this protection is, potassium pertechnetate can only be used only in closed systems because of its radioactivity.