Superconductivity was discovered in 1911, Deirdre Black looks back 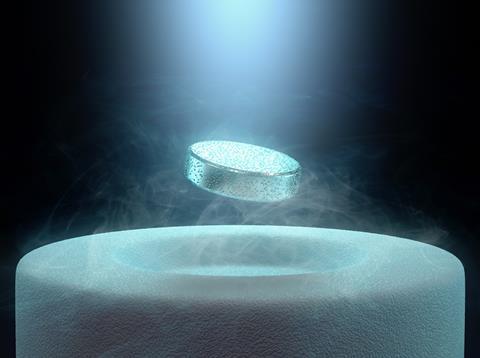 A magnet levitating above a high-temperature superconductor, cooled with liquid nitrogen

In 1911, Heike Kamerlingh Onnes, a low-temperature physicist, discovered the extraordinary phenomenon of superconductivity. He found that some metals, when cooled to very low temperatures, have no electrical resistance. So a wire made of these metals can carry an electric current around it forever, without needing a battery or other power source. This discovery came as a consequence of Onnes’ research on techniques to liquefy gases with the goal of reaching absolute zero. In 1908 he had managed to make liquid helium, which required temperatures as low as just 4 degrees above absolute zero. When he carefully cooled mercury wires using liquid helium he found that their electrical resistance dropped to zero.

The story of superconductivity is one of many breakthroughs of the 20th century and challenges for the 21st century. It took until 1957 until a theoretical understanding of how materials become superconducting at low temperatures was achieved. In 1933 Walther Meissner and Robert Ochsfeld discovered that, in addition to their amazing lack electrical resistance, materials in the superconducting phase repel magnetic fields. This means that if a magnet is placed on top of a superconductor it does not rest touching the surface, but hovers or levitates above it as the magnetic field is forced to pass around the superconductor!

The most widely known application of superconductivity is Magnetic Resonance Imaging (MRI) scanning which is an increasingly routine procedure for medical imaging. The high magnetic fields needed for MRI scanners are made possible by the large currents passing through the superconducting wires in electromagnets.

The Meissner effect has also created excitement about the possibility of fast magnetically levitated trains such as the Yamanashi test line in Japan.

A train reached a top speed of 361 mph on the Yamanashi test line in Japan in 2003, breaking the world speed record for the fastest non-conventional manned rail vehicle.

Research in superconductivity is still extremely active, ranging from experimentally identifying, synthesising and studying new superconducting materials, to the quest to understand how materials become superconducting at higher temperatures. The promise of these new materials is tremendous. For example, for a new generation of MRI scanners which do not require cooling using liquid helium, making them much less expensive. There are also limited global supplies of helium.

Also on the applications side, higher temperature superconductors may play a major role in future generations of electricity grids, reducing the energy lost to heat and enabling large scale distribution of electricity generated from renewable energy sources. Current higher temperature superconducting materials are too fragile to be used on a large scale. There are small demonstrator sections of superconducting grids which are part of large initiatives such as EU MENA (European Union Middle Eastern and North African), a project which aims to include exploring options for transporting solar electricity produced in the Sahara Desert to Europe.