A nose for trouble 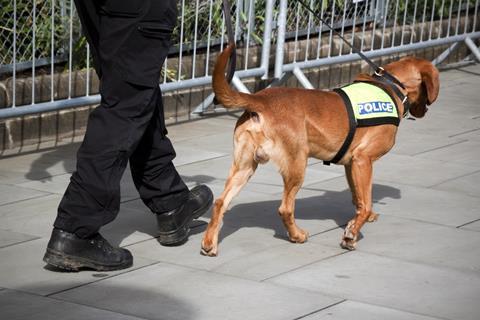 Of the five main human senses, smell must be the least popular in terms of art, leisure and recreation. Compared to the amount of information and enjoyment we receive from seeing, hearing, touching and tasting the world around us, smelling seems kind of dull.

It is not as if we don’t have impressive noses – there are over five million smell receptors in our hooters – but other animals just seem to get more from smelling things. Compare our noses to that of a bloodhound, which has some 300 million smell receptors, and you can see why dogs take sniffing so seriously. Science has been able to extend our other senses far beyond the biological limits of the most extraordinary of animals (our telescopes see farther than the best eye, seismometers detect earthquakes on the other side of the world, and radar beats even a bat’s echolocation), but how are we doing when it comes to smell?

‘In most instances the smelling power of a dog is still much better than our man-made instruments,’ says Anton Amann, the director of the Breath Research Institute in Austria. ‘That’s because the real-time capacity of a dog’s nose is absolutely great. I really would like to be able to smell like a dog – even if it’s just for an hour or so!’

Amann uses specialist laboratory equipment to artificially ‘smell’ the compounds in the air that we exhale. ‘Hundreds of compounds can be detected in human breath,’ he says. ‘Some are smoking related, others are produced [in the body] – we are interested in all of them.’

Typically, mass spectrometers are used to measure the mass of the molecules that are exhaled on our breath, and to identify them. This means researchers can see exactly what is exhaled by volunteers who take part in experiments, and what changes from breath to breath in real time, opening up a new way to answer questions about our bodies. ‘There are many interesting things to find that you can’t see with blood measurements, because you simply cannot take blood samples every second,’ says Amann.

Many of the compounds produced in the body come from the process of breaking down the food we eat –otherwise known as metabolism. There are thousands of these metabolite compounds and isoprene, for example, is the most common hydrocarbon in exhaled breath. Because it is so small and has no polar groups, isoprene evaporates easily which allows it to be detected by Amann’s machines.

When a person is doing exercise, like cycling, the amount of isoprene in their exhaled breath increases enormously. As they continue exercising, the level drops as the body’s supply is used up. ‘For some time we didn’t know where the isoprene came from, but now we think it comes from the periphery of the body, like the muscles,’ Amann explains. ‘If you just pedal with just your left leg, you can deplete it of isoprene, so that after 10–15 minutes you cannot see an isoprene peak [in the mass spectrum] any more. Then when you start to pedal with your right leg, we’ll see the peak come back again,’ he says.

Beyond understanding more about our metabolism, breath analysis can reveal much darker goings on in our bodies. The presence of cancer cells in the lungs gives off a signature smell that can be used to diagnose the disease. Indeed there have been studies testing the ability of dogs to detect lung cancer just by smelling breath samples. While it’s not known what a dog is sensing when it finds a positive result, Amann has detected differences between the breath of healthy people and lung cancer patients using his equipment. ‘I think this could be used [as diagnosis] in the future,’ he says, adding that extensive work will be required to take this new field of research into a clinic setting and that the future of breath research lies in instrument miniaturisation. ‘In a clinical test we would not just compare, say, cancer patients and healthy subjects. We would take into account other conditions, like chronic obstructive pulmonary disease. Many different things will have to be developed to make a breath screening procedure for lung cancer.’ 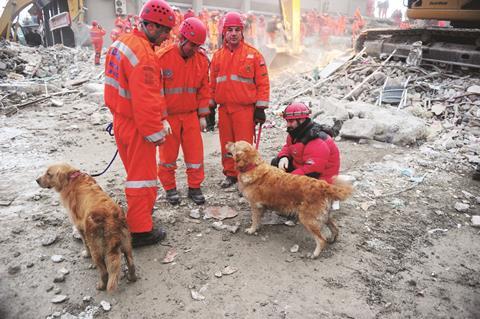 If such highly sensitive detection of human metabolites has the potential to replace blood tests in clinical diagnosis, could it be applied to other applications, including those usually carried out by sniffer dogs – such as search and rescue?

After an earthquake, when people are trapped under collapsed buildings, dogs are invaluable in helping rescue workers look for survivors. But it’s tough work – the dogs can’t just wait for the right person to pass by and pick up their trail, they must climb over rubble and inspect every nook and cranny, searching for a whiff of a trapped person. Dogs and their handlers must work quickly too – the first 48 hours after an earthquake are crucial, and digging where there is no one to be found is time wasted.

‘Dogs are really great, but they do get tired quickly,’ says Amann, adding that after half an hour of very difficult searching the animals need about two hours of rest to maintain their accuracy. ‘There is a need to develop our own sniffer to do this work, instead of relying on dogs,’ he says.

This is part of what the Second Generation Locator for Urban Search and Rescue Operations (SGL for USaR) project hopes to achieve. This EC FP7 Security Research Program brings together 21 research partners from all over Europe (including IT experts, chemists and rescue teams) with the aim of developing new tools to improve search and rescue technology, and ultimately save lives. Milt Statheropoulos, director of the project and professor of analytical chemistry at the National Technical University of Athens, Greece, hopes to detect the chemical signatures coming from people trapped in a confined space. ‘Four different research groups are involved,’ he says. ‘My group has contributed and we have involvement from Loughborough University in the UK, the Academy of Science in Innsbruck, Austria, and the Analytical Science Research Institute in Dortmund, Germany.’

Scientists like Statheropoulos and Amann are looking for chemical fingerprints – patterns of compounds released into the air from trapped human survivors that can be traced back to their source. One of the big markers is ammonia, which is released through breath, urine and even sweat. But there are other compounds to look for, including aldehydes and ketones found in urine, and the compounds that are found on breath, including isoprene.

Detecting all of these substances is difficult, since the fingerprint generated by a survivor trapped beneath the rubble changes over time. ‘The main metabolic pathways that we recognise in a normal person can change rapidly,’ Statheropoulos says, explaining that experiments need to be carried out with volunteers who have been enclosed for a few hours, or even one day, to mimic the effect of confinement. ‘Compounds such as acetone accumulate very quickly when you don’t eat or drink,’ he adds.

In a typical real-world search and rescue operation in a collapsed building, there will be a lot of dust and broken up building material. This can interact with the metabolites given off by survivors and change the chemical profile that rescue workers are looking for. To simulate this researchers have passed samples from volunteers through concrete, MDF and ceiling tiles, but Statheropoulos says that even more external factors need to be taken into account. ‘There could be very strong chemical background from sources like fire. We need to differentiate chemicals that indicate human presence from similar compounds from other sources.’

Statheropoulos explains that, while the metabolite-sniffing technology has yet to be used in a real search and rescue operation, extensive testing, simulation and validation has been carried out using experimental instruments. ‘Hopefully we will be able to develop more than one prototype … and be able to use them more extensively, and test them in more complicated conditions,’ he says. ‘We are in discussions with industry partners to make industrial prototypes that are more robust, and can be easily transferred for work in the field.’

The project is also looking at how to coordinate resources, transmit data during a search and rescue operation and even carry out remote analysis. Statheropoulos is passionate about taking his chemistry out into the field, creating a new arena for this technology and hopefully giving some hard-working dogs a bit of a rest. ‘We are really in line with the latest achievements in communications and instrument miniaturisation,’ he says. ‘It’s good to see chemistry following the advancement of technology, and not getting stuck in the lab.’