How have chemistry exams changed in the last 100 years? Kristy Turner goes to the archive to find out 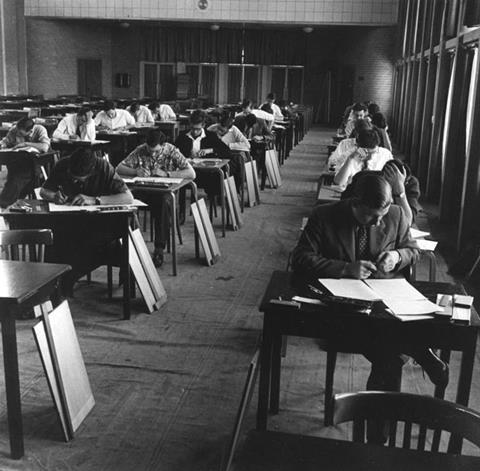 With a few exceptions, 1905 was an unremarkable year in British history. At home, the women’s suffrage movement had begun. In Europe, Bloody Sunday had heralded the start of the Russian Revolution and Albert Einstein published his special theory of relativity. For chemistry, the major milestone was the development of the Haber process. This transformed agriculture, but as the basis for many exam questions it has caused headaches for school students to the present day. And yet in 1905, before the discovery of the proton, 18-year-olds were taking chemistry exams that are in many aspects both familiar and alien to modern students.

An unremarkable office block on the edge of the University of Manchester campus is home to a fascinating archive of more than 100 years of exam materials, set by what is now the AQA exam board. Although it has been through many incarnations in its time, AQA can trace its history back to an alliance of the universities of Manchester, Liverpool and Leeds. The wealth of information provided by the archive generates a number of research questions, the most pressing and challenging of which is: have chemistry exams become easier?

In 1905 the assessment framework was a confusing mix of the school leaving certificate and local qualifications, and schools were largely free to set their own curricula. One of the only reference constants for exams in chemistry was the university matriculation paper, sat by students wishing to gain entry to degree courses, the forerunner of the modern A-level.

To present for matriculation in 1905, a student had to satisfy the examiners in English and English history, mathematics and three other subjects, one of which had to be a language. Chemistry was an exam subject though biology and physics were not – ‘modern’ physics was in its infancy, its predecessor as far as school level study was concerned was elementary mechanics. Natural history incorporated botany and zoology, though there must have been significant overlap with geography.

Although syllabuses in the modern sense did not exist, the board’s regulations did outline the general areas students would be examined on. For chemistry this amounted to four bullet points, a huge contrast to the reams of paper that make up a modern syllabus:

The first question on the June 1905 paper would strike fear into the heart of many a modern student and a good number of their teachers: ‘On what facts was Avogadro’s hypothesis founded? Explain concisely its importance in chemical theory.’

There are no indications of the amount of work required to answer the question. Using modern thoughts of slightly less than a mark a minute, the seven questions required in the three-hour examination would take perhaps 25 minutes each, so twenty marks worth of content could be a reasonable estimate. Other questions from this time had an overwhelmingly practical focus, concentrating on recalling methods of preparing particular substances and their reactions.

There were relatively few chemical calculations, which form the basis of much of modern chemistry papers – after all, the term ‘Avogadro’s constant’ wasn’t proposed until 1909. Teachers at the time must have had much greater understanding of the requirements of the exam than is laid down in the regulations.

It took until 1951 for the government to regulate the hotchpotch of examinations for 18-year-olds by introducing the GCE Advanced Level (A-level). A bewildering menu of subjects tends to be seen as a modern phenomenon, and rose-tinted glasses lead us to think in the past there were fewer, and more ‘proper’, subjects. However, curriculum diversity was just as much the case in 1951 as now. Students with scientific interests could choose from A-levels in mathematics, mathematics and theoretical mechanics, physics, chemistry, physics with chemistry, botany, zoology, biology, geology, general science I and II and elementary physiology. Some of these weren’t allowed in combination, but 11 STEM A-level qualifications is a similar number if not slightly more than what is available in 2016. For research purposes, the constancy of chemistry as a subject has been a significant advantage.

Still, the chemistry exams produced by the board in 1951 were not especially different to those matriculation exams preceding them. There was still an emphasis on knowing preparations and reactions of substances, and few modern A-level chemistry candidates would be able to score highly on question one from the 1951 paper 1 (figure 1) 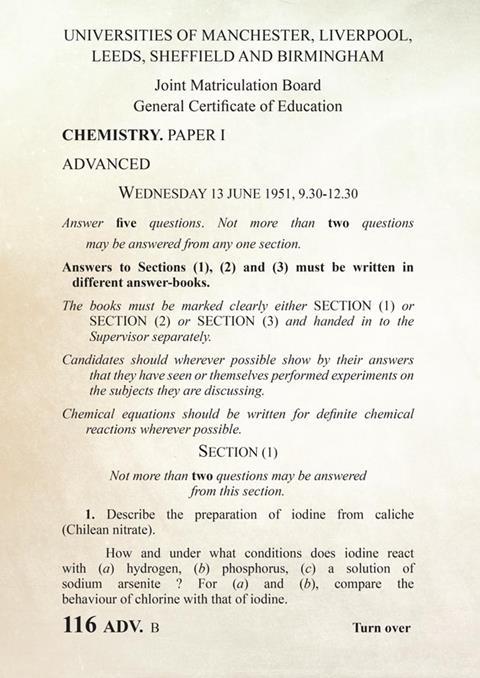 However, some questions are remarkably similar to those seen in modern papers. Question five of paper 2 would not look out of place in 2016. 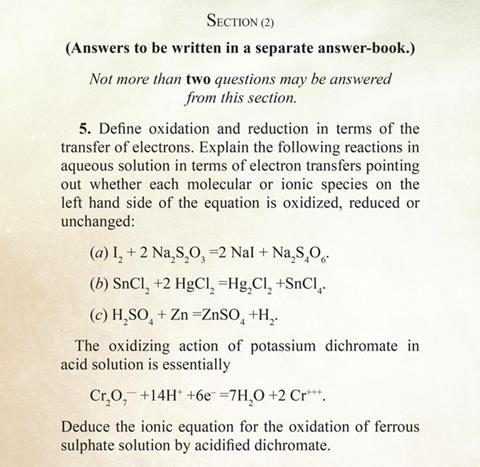 Chemistry A-level was originally designed to be assessed with three papers, each three hours long, with the third paper being a practical exam. It is a perennial joke that if you ask anyone about A-level chemistry practical work they will mention titration, and indeed practical titration exercises were there from the outset. Although the style of questions was quite different to modern papers, titration exercises similar to those still routinely set for A-level students were present in the old practical exam. Another exercise in the exam was observational tests for anions and cations – carrying out these tests and making inferences from the results remains on the syllabus 65 years later.

And it would seem with similar exercises come similar outcomes. Indeed, the examiner’s report for the first sitting of the A-level chemistry exam make fascinating reading for the modern teacher. The examiners in 1951 noted that in various questions:

For modern teachers it is in equal measure comforting and frustrating. Comforting that the problems of exam skills we face today are not new or isolated to our own classrooms, but frustrating that in 65 years of the exam we haven’t found a magic bullet to fix the issue.

The purpose of the A-level has been the subject of debate in recent years. Is it simply a university entrance exam or a more general qualification to be taken by those aiming at employment or apprenticeships? In 1951 A-levels were primarily taken by candidates aiming for university and were still a niche qualification. In 1953 around 6% of 18-year-olds obtained one A-level pass and less than 3% achieved the three passes at A-level that is the usual offer for university entrance today. Since A-levels were initially graded pass or fail, there were no university offers made on condition of achieving a particular mark.

Grades appeared in 1963 and were norm referenced; regardless of the ability profile of the subject and cohort, the top 10% of papers were awarded an A grade. Criterion referencing was introduced in the 1980s, setting grade boundaries according to candidates achieving a defined set of criteria for each grade. This, and other factors, including the rise of web-based exam preparation materials, resulted in fairly steady grade inflation. In 1993 16.8% of chemistry A-level candidates received a grade A. Twenty years later 25.3% achieved grade A with a further 8.3% gaining the A* grade. In 2016 A-levels exist somewhere in between a norm referencing and criterion referencing system and as recently as February 2016 this was subject to an online consultation by Ofqual.

Provision for the most able students is also a matter of debate: are A-levels able to discriminate between the very best candidates? Additional exams, scholarship papers, special papers, ‘S-level’ papers and the Advanced Extension Award were designed to sit alongside A-levels and meet this need. In 2009, the introduction of the A* grade was considered to represent sufficient challenge to abolish these additional papers. Universities continue to express concern about the rigour of A-level for the very top end and whether it meets the needs of very selective universities and courses, now increasingly making use of their own entrance tests to supplement the information received from A-levels.

Negligence and slovenliness in the presentation of answers will be penalized

This quote is taken from a 1964 practical exam paper. At first glance it is an amusing statement and a rule that many teachers would love to see enforced in their own classrooms. Upon deeper reflection, it tells us a lot about the attitudes of examiners and the educational establishment in 1964. Negligence and slovenliness in the presentation of answers is a common problem with school students and for many there will be no underlying cause beyond sheer indolence. But for some students there may be genuine reasons why their work may appear to lack care. For much of the history of the A-level, understanding of special educational needs was limited. It may be surprising to many to find that official acceptance of dyslexia by the Department for Education didn't come until the early 1990s. Many of the very visible changes to the design of A-levels have been made not to make the papers easier but to make them more accessible for students with additional learning needs.

The biggest difference between modern exams and their historic predecessors is not in the difficulty of the questions but in the overall look of the papers. Modern papers have a clear typeface, plenty of white space to ensure readability and relatively well defined rules on the lengths of sentences and the placement of command words. The number of marks is clearly indicated and a defined space to write the response in makes it clear to the students approximately how much writing is required for the answer.

Still, it remains a pressing research question whether the difficulty of chemistry exams has changed. The extent and purpose of the chemistry curriculum are also a matter of continuous research, especially in the current cycle of assessment reform. As a practising A-level teacher, work with these papers has already thrown up interesting information on the psychology of question setting and the relative merits of direct questioning compared to command-led questioning. Another avenue of research is the comparison of A-level papers with undergraduate papers and the possible implications for transition to higher education.