Beating HIV with a nanosized stick 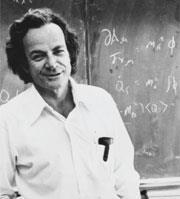 Richard Feynman's vision helped to kick-start the field of nanotechnology

In December 1959, the eminent physicist - and later Nobel laureate - Richard Feynman gave a talk entitled: There's plenty of room at the bottom - an invitation to enter a new field of physics. Here, he offered to 'describe a field, in which little has been done, but in which an enormous amount can be done in principle'. He talked about work carried out in the area of miniaturisation so far and then discussed exciting possibilities for the future: 'There is a device on the market, they tell me, by which you can write the Lord's Prayer on the head of a pin. But that's nothing; that's the most primitive, halting step in the direction I intend to discuss. It is a staggeringly small world that is below. In the year 2000, when they look back at this age, they will wonder why it was not until the year 1960 that anybody began seriously to move in this direction.'

Although Feynman's vision may not have been the sole impetus for kick-starting research on such a small scale (especially as his focus was just on physics, computing and electronics), global studies of extremely small structures since then have led to a wide range of benefits that impact everyday life.

The first record of the coining of the phrase 'nanotechnology' was in 1974 by the Japanese scientist, Norio Taniguchi, in a journal paper named On the basic concept of nano-technology. Again the focus here wasn't chemistry, but on the production of semiconductors through atomic manipulation.

The prefix 'nano', when used in science, means one billionth. In terms of scale, a nanometre is one billionth of a metre. To help with visualising this, a human hair is approximately 80 000 nanometres in diameter. The term nanotechnology is difficult to pin down as it covers many different scientific disciplines, all working to find applications and benefits from inventions below 1000 nanometres.

One such multi-disciplinary area of research with clear benefits is nanomedicine, defined as the application of nanotechnology to medical diagnostics or therapies. There are many other definitions available, due to the diversity of approaches and reputed benefits, but this definition works well and incorporates the breadth of global research and development. Nanomedicine includes the use of small-scale manufacturing techniques to improve diagnosis of disease, which can dramatically improve a patient's chances of recovery.

Medicine on the nanoscale

When developing a new nanomedicine therapy, there are generally two approaches that are taken by scientists. The first is to create a nanoscale vehicle that can carry drug molecules within the body. This vehicle can be designed to head directly to, ie target, diseased cells, and therefore prevent the drug from entering healthy tissues and cells and causing undesirable side effects. This approach has worked well in cases where the drugs are known to have considerable toxicity when they enter healthy cells. The nanovehicle can also be designed to overcome insolubility problems with certain drugs. This approach has been shown to work well with very poorly water-soluble anticancer drugs. 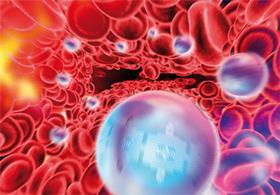 Conceptual computer artwork of nanoparticles delivering drugs to the bloodstream

Another related strategy involves taking drug molecules that are easily removed from the blood and changing their size to 'hide' them from the normal mechanisms our bodies use to dispose of them. This extends the time the drugs spend circulating our bodies within the blood, therefore improving the treatment outcome. 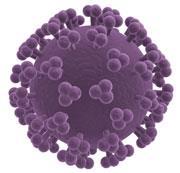 In both of these cases, the nanomedicines involved are typically injected and numerous examples are used within clinical settings as therapies approved by the regulatory bodies. These range from anticancer drugs such as Caelyx/Doxil that are carried in a liposomal self-assembled nanostructure, antibiotics such as Ambisome, a liposome nanomedicine with reduced toxicity, and antihepatitis drugs such as Pegasys, which is an extended circulation pro-drug.

The term nanoscale vehicle should not be mistaken for the popular image of nanorobots zooming through arteries and veins, 'hoovering up' cholesterol or injecting individual cells. Although these images are used to describe nanomedicine, the actual formation, control and use of such nanomachines are science fiction rather than science fact. It is highly unlikely that nanobots, envisaged in this way, will ever be viable medicines. Miniaturisation is leading to outstanding opportunities for small machines, but nanoscale vehicles used for injected medicines are assemblies of small molecules or tiny particles formed from polymers and are not autonomous.

Injections, however, are not the preferred way to treat many diseases, especially chronic diseases that rely on patients administering their own drugs. In these cases, oral dosing of tablets, capsules or syrups is the most common route as it is acceptable to the widest range of different patients. Also, it is the most commercially viable approach in terms of long term storage and transportation. 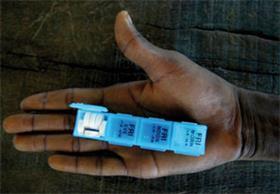 The second key approach for nanomedicines addresses this by producing tiny particles of poorly water-soluble drugs and forming solid drug formats that redisperse within the stomach or gut to release the solid drug nanoparticles. These medicines overcome the increasing issue within the pharmaceutical industry of the low solubility of new drug candidates. By forming small particles of drug, the rate the drug dissolves increases due to the vast increase in surface area. To add context to this concept, a single cubic particle of poorly-soluble drug with dimensions of 100 000 x 100 000 x 100 000 nm, essentially the diameter of a human hair, would produce 125 000 000 drug cubes with dimension of 200 nm. This decrease in size and increase in number can have a profound effect on the behaviour of drugs in the body, including how they interact with cells after ingestion and how much drug gets absorbed into the bloodstream.

Making solid drug nanoparticles can be achieved either by grinding or milling of large particles or by the controlled precipitation of solutions using organic solvents. Milling to the nanoscale has been particularly successful in formation and adoption of nanomedicines for many therapies including the prevention of organ rejection (eg Rapamune), chronic pain (eg Avinza), blood pressure (eg Verelan) and cholesterol reduction (eg TriCor). 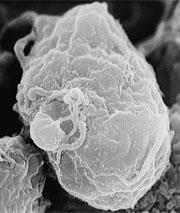 One chronic disease that has not benefitted clinically from nanomedicine is human immunodeficiency virus (HIV). Currently there are more than 35 million adults and children estimated to be infected with this disease worldwide. HIV patients have to take a cocktail of multiple drugs, sometimes twice daily as chronic exposure to these medicines is required for effective treatment.

Difficulties in maintaining compliance with therapies are common. This is problematic as failure to take the drugs as prescribed can lead to drug resistance, where the virus is able to continue to replicate despite the presence of the drug. As most drugs have some form of side effects and all patients suffer to a different extent, for many patients continual dosing with cocktails of drugs proves to be difficult. HIV therapies are not isolated in having patient compliance problems with long-term dosing; recent global statistics have shown national compliance with prescribed treatment regimens as being as low as 43% for asthma, 37% for HIV, 27% for hypertension and 50% for organ replacement patients.

As already mentioned, solid drug nanoparticles can increase the absorption of poorly soluble drugs and therefore offer a decrease in pill size and, potentially, frequency of dosing or severity of side effects. Recent research at the University of Liverpool has shown that these three benefits are, in principle, achievable. Solid nanoparticles of conventional antiretroviral drugs have been produced using techniques pioneered in Liverpool. The drug molecules are dissolved in a solvent, emulsified into water containing water-soluble polymers and surfactants, and controllably dried to produce solid materials containing nanoparticles of drug.

Three of the most commonly used antiretroviral drugs have been studied in a programme involving the production of over 4500 drug/polymer/surfactant variations. Of these, 450 nanoparticle options were considered worthwhile for detailed cell-based studies. These studies involved looking at their toxicity, mapping the accumulation of the drugs in various cell types, and observing how they are transported through the gut barrier using models.

Penetration into, and retention within, cells is particularly important because dissolved drug molecules often fail to enter HIV-infected cells at sufficient concentrations to be useful and this can lead to poor clinical outcomes. Conversely, it is also possible that higher penetration into some cell types may exacerbate toxicity and, therefore, understanding the penetration into multiple cell types is critical. Generally, lower toxicity has been shown across a range of cell types compared to the bulk drug and nanoparticles were found to be retained within target cell types for longer periods. 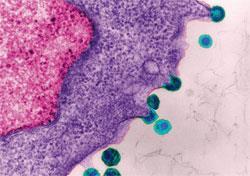 Several promising nanoparticle/polymer/surfactant variations were identified and then tested to see how well they were absorbed in rats when given orally. The lead therapy options showed faster and more complete absorption than the conventional bulk formulations.

Other opportunities for targeting specific tissues and for increased activity of the drugs against the HIV virus were also seen. One particular cell type where success was seen was in macrophages - considered to be a cellular 'sanctuary' site for the HIV virus. Dissolved drugs in the bloodstream deactivate circulating viruses but often their penetration into macrophages is less than optimal. This means that ongoing low-level viral replication may occur and new virus particles can then leave the macrophage and enter the bloodstream once the drug levels have fallen again. As their name implies, macrophages engulf and digest particulate matter, including nanoparticles, and this passive targeting enhances delivery of the drug to these virally-infected cells. 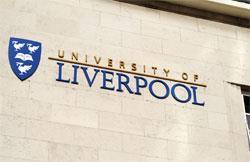 The research carried out at Liverpool by Steve Rannard and Andrew Owen is focused on translating these laboratory-based results into therapy options that can undergo initial studies in humans. This work has the potential to generate the world's first orally-dosed nanomedicine for the treatment of HIV.

Their approach has identified the best nanoparticle/polymer/surfactant ratios and the appropriate nanoparticle properties but the value of the technology will only be realised if the benefits can be seen in human patients. Before this can be tested, the materials must be scaled-up to produce therapy options that can safely be tested. The regulatory, process and ethical routes are understood but the practice of moving an academic research output to a trial therapy for human tests is not trivial and must be conducted very carefully.

The potential benefits, however, could reach millions of patients and the programme is focused on four potential new medicines. Demonstrating these benefits in humans should allow the potential new medicines to be made available quickly, as a significant benefit of the Liverpool approach is that no new drugs or vehicles have been used. Rather, simply the formation of very small particles of current drugs has shown big potential benefits for patients. To the best of their knowledge, the Liverpool collaboration of chemists, pharmacologists and clinicians is the only multi-disciplinary group in academia targeting oral nanomedicine therapies for HIV treatment.

When Richard Feynman gave his lecture in 1959, he also offered two cash prizes. The first required the writing of a whole page of information so small that an electron microscope would be needed to read the letters. The second required the formation of an operating electric motor that was only 1/64th of an inch cube (~0.4 mm). In 1960, the prize for the electric motor was paid and this required no new tools or capabilities, just skilled craftsmanship. The prize for writing high quality, high density text was paid in 1985 after the first paragraph of A tale of two cities was produced to the required size.

Nanomedicine has been available in the clinic for almost 20 years, with a growing list of therapies leading to new patient benefits. There are several estimates of the current and future value of this market sector with one such estimation suggesting a global value rising to $160 billion (£100 billion) by 2015. It may be true that size does matter after all, but at least in some cases smaller may be better.

More on the science and technology of nanomedicine