In the school lab, the chemicals you deal with are easily disposable but what about back in the technician’s store? 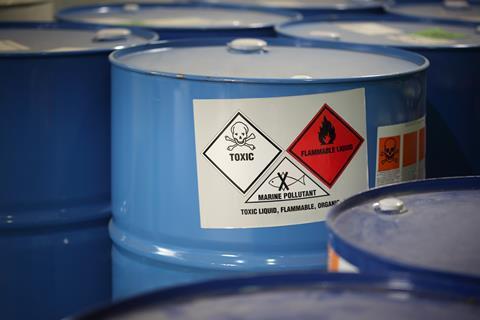 The chemical store is where everything is kept, portioned out for each class and taken back at the end of the session. A safe store will have flammables locked in a cupboard, far away from oxidisers and all the corrosives will be stored together.

As syllabuses change, chemicals that were once regularly used are not used at all, but technicians will often save supplies in case they are needed once again. This means that over time shelves can get full and eventually something has to be thrown away. When that happens, the school will have to phone in an expert.

Pete Foulkes from ChemGo is one of the experts that your school might phone. He explains that he is licensed in the safe storage and transport of chemicals and often goes into schools just to advise technicians on best practice so that everything is as safe as can be.

Pete has also run training courses for firemen so that they know what to do if they are ever called to a chemical spill, or an accident where chemicals are involved.

Pete says he is often called to schools when the science department is moving as that’s often when people take stock and realise that they are still storing chemicals they might not have used in years, or that are no longer allowed to be used in schools. Sometimes there are labels that are no longer legible and Pete has to work out what is inside the bottle.

At the transfer station

At the transfer station, another chemist will run tests to confirm that Pete is delivering what is expected. It’s very important that everyone’s report of what chemicals are being processed matches up and nothing is sneaked in or missing. The tests will range from simple pH tests to full mass spectrometry analysis.

A lot of what comes to the transfer station from schools are acids and solvents and both can often be reused. Acids contaminated with organic compounds can be cleaned with steam and distilled. Acids with metal contamination can be cleaned and reused using dialysis through a semi-permeable membrane, leaving contaminants behind. Sulfuric acid contaminated with metals can also be concentrated and heated to give off sulfur dioxide. This can be used to make more sulfuric acid. Solvents can often be reclaimed using activated carbon, which is a form of charcoal with a very high surface area. Chlorinated solvents are tricky to recover safely but can often be incinerated instead. 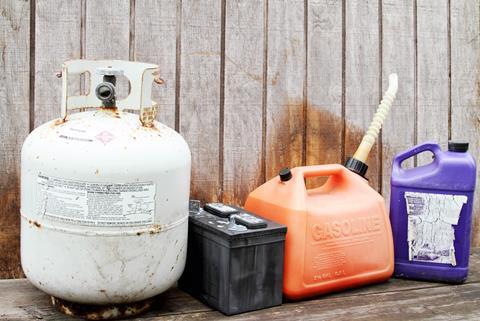 The transfer station doesn’t just deal with school chemicals, but also old buckets of paint, out of date cleaning products and even oily rags from garages. The rags contain too much oil (over one per cent) to be allowed into land fill. Instead the transfer station squeezes out as much oil as possible, which can be recycled, and then the oily rags are chopped up into small pieces and sold to Germany where they are burnt to provide heat and power.

The bottles that the chemicals came in are also recycled, but that recycling is done in China. The Chinese take the old bottles from the transfer station, as well as old paint pots, and clean, grade and chip them. The chipped plastic is then sold again and often used in this country to make injection moulded plastics.

So what happens to the chemicals in your school? Well sometimes they can be recycled and sometimes they need to be destroyed, but it’s always done as safely and efficiently as possible.

Recently, students from a school in the midlands have been analysing left over chemicals just like Pete from ChemGo might.

Ironbridge Gorge Museum in Telford recently called in chemists from Keele University to help them identify samples in old bottles from their Victorian pharmacy. Rather than just run the tests themselves, the Keele team decided to enlist local school students to help out.

GCSE students from Sir Graham Balfour School, Stafford, visited the museum and performed a variety of experiments to try and identify the different potions. Following that, A-level students have then gone into the chemistry department at Keele to run analytical tests in the lab. The A-level students analysed samples against reference samples, assuming that the earlier identifications were correct.

Most of the samples turned out to be quite safe, despite the labels on the bottles claiming to contain poisons and disposal won’t be a problem. But Kathrine Haxton, who ran the work at Keele, thinks it’s a shame that the bottles in the museum will now be empty.

When asked what the weirdest sample the team found, Haxton answered easily ‘rhubarb powder.’ Odd now, but in Victorian times rhubarb powder was used an a laxative and was so useful that it was more expensive, by weight, than opium.

Pete doesn’t just get called out to schools. He once spent several days crawling around an airplane that had been taken to pieces; he was looking for mercury from a broken thermometer.

Mercury can corrode through metal, including planes, so when a thermometer is broken on a plane, it has to be taken apart and checked carefully before being allowed to fly again. It was Pete’s job to climb around the aircraft with a mercury vapour sensor and then suck up any escaped mercury. Once Pete had collected all the mercury, the plane could then be checked for damage and put back together again.

If you break a mercury thermometer it’s unlikely you’ll do much damage but you should avoid mercury contact with jewellery. Collect up the mercury mechanically (eg, with a syringe). Mop up the remainder with a hot paste of 1:1 calcium oxide/sulfur mixture in water.