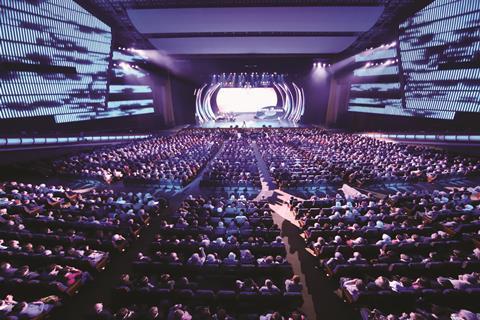 The universe is obliged by physical laws to get messier and messier, so the only way to carve out a patch of order is to leave the surrounding area in chaos. To use more scientific terms, order can only come at the expense of a larger amount of disorder elsewhere.

In the same way, it takes something as spectacular as a concert to get such a large number of strangers to sit in such a highly ordered pattern. I know what you’re thinking: that order is only the result of the fact that all the chairs are fixed to the floor. True, but would all those strangers file into all those seats if there was no concert to see? Even if a stadium were left unlocked, you would not witness thousands of individuals filling up those rows to point their faces at an empty stage.

No, it takes some kind of spectacle to produce such an ordered group of people – like a concert. And a concert happens no more spontaneously than the filling up of the seats. It takes months of planning, advertising, promotion, ticket sales, artist rehearsals, set and lighting design to make it take place. But what happens afterwards is spontaneous; no rehearsals or extensive planning are required to get the audience back to their homes.

The same is true for crystals. At home before the show, the future audience members are all at different distances from the stadium and each other. With no pattern to their arrangement they are like particles in a solution. When they arrive at the stadium, they line up in ordered rows and evenly-spaced like the particles in a crystal. But once the music finishes, they dissolve back into the solution.

This is similar to how sugar comes to be in a cup of tea. Sucrose, better known as table sugar, is extracted from plants such as sugar cane. The plants are crushed and soaked in water, which dissolves the sugar to form a syrup. The only way to get crystals of sucrose out of the solution is to increase the proportion of sucrose to water, which is achieved by heating and evaporating it. So how does the universe get more disordered when a crystal of sugar forms? Because the heated molecules of water turn into gas, and the word gas derives from the Greek khaos. Gas is chaotic!

How is this like a concert? While dissolving sugar in a cup of tea is a simple matter of adding sugar and stirring, getting the sugar back out is much harder. Just as the audience members will not line up together unless there is a show to see, the molecules of sucrose will not line up into a crystal unless all of that energy is expended to remove the water. The reason for this is simple statistics. A crystal forms when the sucrose molecules collide with each other more frequently than with water molecules. In a solution of moderate concentration, sucrose molecules will hardly ever bump into each other because each one is surrounded by water molecules. Therefore, simple maths predicts that a crystal will never form until sucrose molecules start to outnumber water molecules.

This is called entropy and it has huge influence over the likelihood of a chemical process happening. Particles only line up neatly when other particles get more disordered, in the same way that strangers only line up for a concert after the promoters have endured the chaos of organising it.

Have a go at making your own crystals. Collaborate with thousands of students around the world by taking part in this experiment to discover the best conditions for growing the biggest crystals.

Have a go at making your own crystals. Collaborate with thousands of students around the world by taking part in this experiment (http://rsc.li/1KJXdUE) to discover the best conditions for growing the biggest crystals.