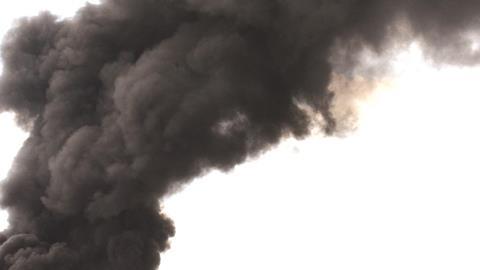 Clearing the air around smoke formation

Answering the riddle of why unsaturated fuels burn with sooty flames

Why do unsaturated hydrocarbons burn in such a distinctive way compared to their saturated counterparts? It’s a simple enough question, and with the smoky flame test sitting alongside the bromine water test for unsaturation on many chemistry courses, you’d think there would be a simple answer. Unsaturated hydrocarbons can be tricky though and defy the dismissive responses you might offer when a student asks what’s happening.

Getting to the heat of the matter

Take the flame temperatures for example. In terms of hydrocarbon fuels, the oxygen acetylene flame can’t be beaten, with an adiabatic flame temperature of around 3500°C. Using air (rather than pure oxygen) as the oxidiser, acetylene can burn around 2500°C, while its saturated cousin ethane can’t even reach 2000°C. When questioned about this, in the heat of the moment, a teacher might suggest a student investigates the relevant Hess cycles. However, using enthalpy of formation values, a predicted enthalpy of combustion (without condensing the water in the flame) for acetylene would be –1257 kJ mol-1 but ethane’s would be –1428 kJ mol-1.

Clearly then, calorimetry alone doesn’t explain the differences in flame temperatures. To answer this conundrum the other molecules present need to be considered (see equations 1 and 2). It’s a great example of Avogadro’s law in action – the same volumes of gases at equal temperatures and pressures must contain the same numbers of particles – and this comes at a cost for ethane. 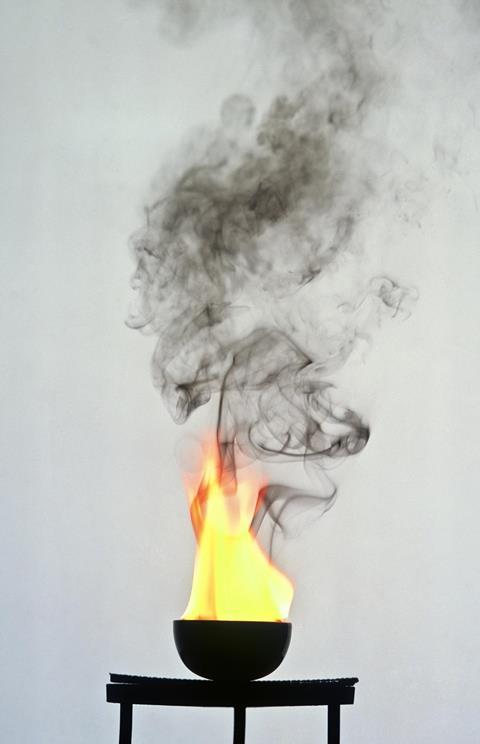 Imagine these reactions taking place in two equally-sized boxes containing stoichiometric mixtures. Because extra oxygen molecules are needed to combust the ethane, and it is necessary to keep the pressures the same, there is less space in the ‘box’ for molecules of ethane themselves. The mole fraction of fuel in the box is therefore higher for acetylene – a back-of-the-envelope calculation for a stoichiometric mix in air shows the number of acetylene molecules combusting is approximately 1.4 times greater than the number of ethane molecules in the same volume.

Also important is the three times as many water molecules generated by the ethane flame compared to the acetylene one. At higher temperatures, more vibrational modes in both the reaction products become accessible to store heat. The, already high, heat capacity of water approximately doubles in the flames. This means the additional water molecules produced from burning each ethane molecule places a further stranglehold on its ability to reach higher temperatures.

These effects combined are more than enough to overwhelm the difference in enthalpies of combustion, and ensure the ethane flame burns at a lower temperature than that of acetylene.

So the combustion reaction equations don’t explain the flame temperature differences, but might they help us explain why the acetylene flame is sootier? Again the answer is no. The equations show that ethane requires more, not less oxygen than acetylene to completely combust and therefore incomplete combustion (that typically produces a sooty flame) should be more likely in ethane if it was just a matter of getting the oxygen to where it’s needed.

At this point, you might look to the textbook for answers. Students have to learn about this test so there must be a good explanation in those books for why the flame is sootier? On the whole, however, explanations are avoided and where they do appear a circular ‘explanation’ is used that just rephrases the question:

The latter is demonstrably not true: the combustion reaction equations show that less, rather than more, oxygen is needed to combust an unsaturated compound.

Naturally at the high temperatures inside a flame, activation energy barriers become less of a hindrance than they are closer to room temperature, and many alternative reaction pathways open up. To explain why unsaturated hydrocarbons burn with a sootier flame than their saturated cousins, we need to start at soot and work backwards to determine which reaction pathways are important here.

Although the composition of soot varies significantly depending on its source, it typically consists of approximately 50nm particles.1 When produced in high enough quantities, in a small enough space, these aggregate together to make particulates of varying sizes – some large enough to be visible to the naked eye. These particles are mostly graphitic in nature, made up of sheet-like carbon structures that vary widely in architecture from highly crystalline to highly amorphous. 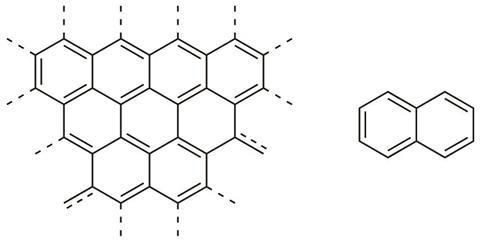 To make one of these soot particles, the first step is to construct a planar, graphene-like layer of carbon. The similarities between this sp2-hybridised carbon sheet and a smaller polyaromatic structure such as that of naphthalene are clear (figure 1).

Structures of this type are so important to the study of soot that they have been given their own name: polycyclic aromatic hydrocarbons (PAHs). To make soot it is necessary to rapidly create and grow PAHs.

The growth of PAHs is well studied and the mechanism proposed by Michael Frenklach, at University of California, Berkeley in the US, for this process is now widely accepted.2 There are two key ingredients needed to grow a PAH: hydrogen atoms and plenty of acetylene. The mechanism of the conversion of a small molecule like naphthalene to an extensive graphite-like structure is known as hydrogen-abstraction-C2H2 -addition, or HACA for short.

The first step to forming a new PAH ring is the abstraction of a hydrogen atom from a benzene ring. An acetylene molecule then adds at this site, to make a two carbon long side chain. A further HACA reaction onto the end of this chain grows the unsaturated side group to four carbons long. This chain then wraps around to form another aromatic ring and build up the PAH (see figure 2).3

Figure 2: The mechanism of PAH growth4

The stable intermediates are themselves PAHs, each populated with relatively strong carbon-carbon sp2 -hybridised covalent bonds with the extra stability afforded by aromatic numbers of p electrons. Numerous intermediates have been identified and studied so far. The reactions proceed like ratchet mechanisms – ensuring that once formed, each intermediate is difficult to break down, preventing the reverse reaction taking place.

This stability is however somewhat balanced by the entropic disfavourability of producing one large molecule from many small ones. A swell of hydrogen atoms is necessary to overcome the thermodynamic break applied to the growth of the PAH. These hydrogens abstract other hydrogen atoms from the thermodynamically stable growing structure and push the reaction onwards.

Thankfully they are in plentiful supply with numerous ‘small molecule’ reactions, such as CH + O → CO + H and CH2 + O2 → CO2 + 2H, providing a pool of hydrogen atoms.4 Many of these small molecule reactions require oxygen. Because soot is typically attributed to a lack of oxygen, it’s surprising to realise that oxygen is so important to the reactions that form it.

You can think of complete combustion versus incomplete combustion as the outcome of a race between soot formation and the formation of CO2, rather than being due to an overall deficiency of oxygen. Looking at the mechanism of how PAHs grow it is clear how the presence of acetylene in a flame dramatically favours the formation of soot, by providing a competing reaction pathway to the traditional oxidation route to CO2. If you burn acetylene itself, the fates of the carbon atoms within it are all but sealed.

What about other fuels?

But what about fuels other than acetylene, how do they produce smoke? It turns out acetylene must be produced in any flame for the PAH growth process that produces soot to start. And the closer the starting ingredient’s structure is to that of acetylene (for example if it contains double or triple bonds) the more dominant that reaction will be, and therefore the more soot will be produced. In the case of saturated fuels the oxidation route to CO2 will dominate instead, but some soot may still be produced under the right conditions.

Let’s look, for example, at how soot forms when burning the saturated molecule butane. A typical first step in hydrocarbon combustion involves the formation of a radical by homolytic fission of a C–C bond, as it is weaker than a C–H bond. An example reaction is C4H10 + M → C3H7 + CH3 + M, where M is another colliding particle involved in the reaction (usually nitrogen).

In the second step the C3H7 radical decays to form an alkene. Importantly, the bond fission will take place in the β-position, one bond away from the position of the radical. The terminal radical will make ethene, while propene will be formed when the radical is located on the central carbon (see figure 3). 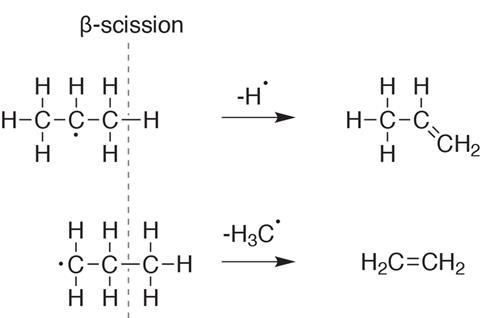 Ethene can react on to form acetylene itself, whilst propene can form the resonance-stabilised propargyl radical – whose stability makes it an ideal candidate to loiter in the flame and join together before cyclising to benzene (see table 1).

It’s easy to see that all these additional steps make the production of soot much less favourable for butane than acetylene.

So we’ve finished at the start. Why do unsaturated molecules have a predisposition to produce smoky flames? Because the soot itself is unsaturated and is formed from small molecules that are unsaturated too. Molecules that will be produced in any flame, but if already present in large quantities to begin with, can give the competing soot-formation reaction a head start over the combustion reaction to give us our familiar yellow sooty flame.

Declan Fleming is a chemistry teacher and author of our Exhibition Chemistry column. He’d like to thank Michael Frenklach for his assistance with this article.