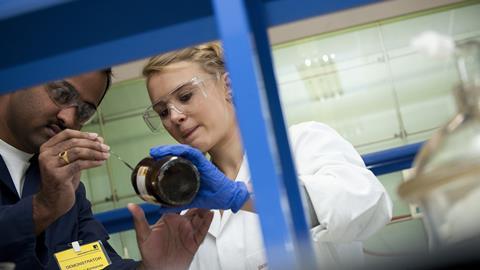 This autumn, Swansea University welcomed its first cohort of undergraduate chemists for 13 years. A resurgent interest in chemistry from students and vice chancellors alike has seen a few defunct UK chemistry departments reopen their doors in the last five years – including Swansea, Lancaster and King’s College London.

These new departments have had a chance to start from scratch and design bespoke curriculums, without existing baggage and based on the latest pedagogical thinking. What they each came up with, they hope, honours the fundamental principles of the subject, but also provides today’s students with the skills to use their chemistry in industry, research, teaching and other scientific roles.

The new curriculum at Swansea has been designed by a team led by chemistry professor Simon Bott for their first intake of 30 students. The aim was to create a more holistic understanding of the key concepts, rather than stick to the traditional divisions of organic, inorganic and physical chemistry.

Because the main concepts of chemistry cut across the sub-disciplines, teaching them discretely can cause confusion. Talking to Chemistry World in January, Simon Lancaster, professor of chemistry education at the University of East Anglia, explained how the same material in topics such as kinetics, orbital hybridisation, NMR spectroscopy and redox chemistry are often taught in multiple ways: ‘You get students learning essentially the same concepts three different times and frequently becoming confused in the process … some of them don’t even try to make the connection.’

Because the main concepts of chemistry cut across the sub-disciplines, teaching them discretely can cause confusion. Talking to Chemistry World in January,1 Simon Lancaster, professor of chemistry education at the University of East Anglia, explained how the same material in topics such as kinetics, orbital hybridisation, NMR spectroscopy and redox chemistry are often taught in multiple ways: ‘You get students learning essentially the same concepts three different times and frequently becoming confused in the process … some of them don’t even try to make the connection.’

Swansea is instead basing its first year syllabus around the central chemical themes of structure, bonding and chemical reactions, with no formal split between inorganic, organic, physical or analytical chemistry. For example, the structure and bonding module will include inorganic and physical concepts related to electron configuration and orbitals but also structure and bonding in organic molecules. 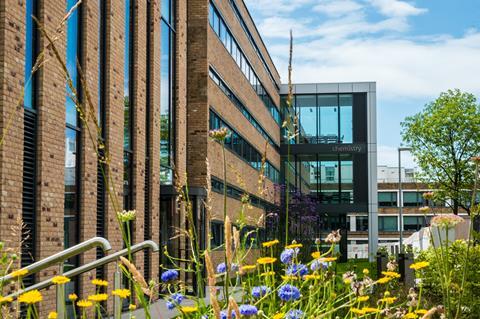 Lancaster University reopened its chemistry department in autumn 2012 with a cohort of 20 students, and this year they welcome 27 freshers. The department’s director of teaching Michael Coogan was heavily involved in developing its new syllabus. A task they had just nine months to complete.

The removal of a sub-discipline split for first year students is also a signature of their curriculum. ‘We’ve tried to make as many [modules] as possible have overlaps, to get away from that idea of rigidly fitting into an inorganic-organic-physical model,’ says Michael.

But after the first year, at both Lancaster and Swansea, teaching takes a more traditional structure. ‘When we looked at what you need to teach in the second and third year, all of it builds from the first year and so there wasn’t this same need to try and maintain the non-traditional direction,’ explains Simon Bott. Also included in the syllabus after the first year are analytical, computational, biological and environmental chemistry.

As would be expected, the new courses include significant research projects in third and fourth years (for MChem) with students working with researchers in the department or wider university. In these later years, the taught courses also put an increased emphasis on state-of-the-art chemistry including the research going on within their own university’s labs.

Overall, the curriculums at Swansea and Lancaster, and indeed most other universities, remain largely unchanged from a decade or two ago, with some areas such as chemical biology and nanotechnology taught more extensively than they were before. ‘There were aspects of the rote learning of elemental properties that [are now] done with a light[er] touch’ says Michael. ‘But they still need to be taught the basics,’ he adds. This suggests there may be a problem with an ever expanding syllabus with nothing dropping off the edge.

Like at many other universities, at Lancaster and Swansea most of the content of the first two years is compulsory. Unlike some other degrees, chemistry is an ‘integrated’ subject meaning there is a large core of chemistry students need to know before they can study the more advanced courses in the later years of their course. This contrasts with subjects such as history where a number of historical periods can be studied independently of each other.

Michael says some traditional elements of organic and inorganic chemistry, that are not as relevant today, could have potentially been dropped at Lancaster but weren’t. ‘You have to think about what people’s expectations are,’ he explains. ‘If an employer interviewing somebody expects them to know or have a certain familiarity with some work, it would be unfair for them to be indoctrinated by our modern thinking if this is going to disadvantage them.’

Another constraint placed on Lancaster’s chemistry department was the need for the course to be modular. All the degrees offered by this university are modular to allow people to mix and match courses across multiple subject areas.

Moreover, the need for Royal Society of Chemistry (RSC) accreditation, which benchmarks the course for students and employers, is one of the most important factors to consider for those designing a curriculum. ‘From the very start we knew that the degree would not be viable unless we got RSC accreditation, so we designed it to meet the requirements,’ says Michael. ‘You can tinker around the edges but there is an awful lot of chemistry you have to teach to be accredited.’

‘We are not going to formally go through the accreditation process for a few years, but we did discuss the curriculum and our plans with the RSC staff,’ explains Swansea’s Simon. Recently returning from teaching and research in the US, he has been pleasantly surprised by the amount of advice and support the RSC has provided. ‘The [RSC] message was to be non-traditional if you think it’s worthwhile but just make sure you are presenting the [necessary] content and meeting the associated learning objectives,’ Simon reports.

The RSC requirements for practical and project work were actually useful for securing resources from the university management, Simon adds. ‘Far from being a constraint on us, [it] actually gave us a lever to make sure we could still keep the appropriate amount of lab-work.’ 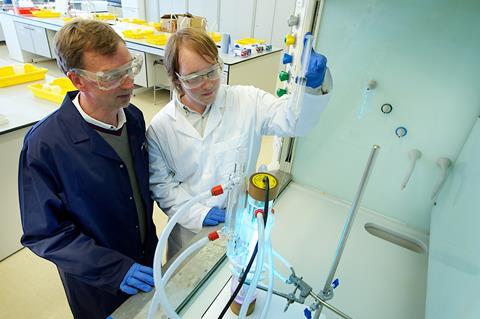 Turning out chemists who are proficient in the laboratory is one of the most important aspects of any chemistry undergraduate curriculum. In both Lancaster and Swansea, practical work supports teaching modules. ‘That was a deliberate choice to try and ensure practicals weren’t just seen as something that has no relation to what they are learning about. So, they are learning about a subject at the same time as doing practicals,’ says Michael.

But Nimesh Mistry, an organic teaching fellow at the University of Leeds, has another view. ‘It’s quite clear that students aren’t going to learn theory through experiments,’ he insists; ‘pedagogy is the key driver and that’s the change we tried to implement.’

Nimesh was hired in 2013 to rewrite the Leeds chemistry department’s practical teaching for its 150-plus chemistry and medicinal chemistry intake. Nimesh’s new practical curriculum was introduced for first year students in the 2014–15 academic year. Now, the purpose of lab work has switched to developing practical skills, rather than trying to back up theory taught in class.

Before 2014, the Leeds course had changed little in 20–30 years. Nimesh describes the previous practical course as full of ‘cook book’ experiments. ‘Students were spending a lot of their time doing the traditional-type experiments – you give the students a manual and they follow the instructions,’ he says.

The first step was to strip back much of the repetitive practical work and remove some of the older techniques such as steam distillation. Nimesh also tried to remove any information overload, allowing students to concentrate on understanding and ultimately being able to direct their own laboratory work.

A key tool for this was open-ended experiments. Nimesh gives an example from the new first year curriculum, where students are given a product to purify by crystallisation: ‘students design their own work-up procedure, they learn how to protonate and deprotonate the molecules and decide for themselves whether to add an acid or base.’ In a similar second year experiment students must decide how to monitor an aldol condensation reaction themselves. ‘Rather than telling them how long the reaction should be stirred for and when it’s going to be complete, they have to work that out for themselves using thin-layer chromatography,’ he explains.

All the new courses have one similarity. They all tried to build in a more realistic picture of lab-based chemical research. In Lancaster, for example, Michael says they have made sure students are able to analyse NMR data from their own compounds, rather than just sample spectra. Changes to Leeds medicinal chemistry practicals also give students a more realistic picture of drug discovery research. ‘Students were making drug molecules but they were essentially doing all the same standard synthetic organic techniques. So, they weren’t necessarily learning any skills relevant to the pharmaceutical industry,’ says Nimesh. Their new second year practical project involves computational discovery methods and biological testing of a potential drug molecule.

All three new curriculums employ preparation before lab work to maximise laboratory learning. ‘A lot of emphasis is placed on the idea that they know what they are supposed to do before they come in,’ says Simon. During this academic year, Nimesh plans to introduce dedicated workshops outside the lab to discuss experimental methods and design. ‘We are trying to see if we can actually teach them that in a class.’

One big change in today’s university landscape is student expectations. ‘Students are now considering themselves customers with all the associated rights that come with that, which means that one has to think quite a bit about the student as a person, as an individual,’ says Simon Bott.

This has meant a shift in communication style. ‘We don’t lecture any more, we teach,’ explains Michael. ’The whole philosophy of university teaching is completely different – you think about how the material achieves the task of the students’ learning and do not simply present materials to the student to learn.’

We don’t lecture any more, we teach

Universities are also thinking about creating a smooth transition from the expectations of school to those of university and ultimately the working world. This means an emphasis on transferable skills and employability. Swansea are tackling this with a first year course they call ‘chemical practice’. ‘Students will have 30 hours of lectures that are associated with the realities of working in a research group, working in industry or working as a teacher,’ explains Simon. Plus, they go on a short ‘field trip’ to work in industry, academic research or the classroom; ‘they will go out in the second half of the first year and actually be exposed to what the possible jobs are as chemists.’

All curriculums should be constantly tweaked to take into account the latest chemical and pedagogy research. Swansea is now starting the process of testing its new curriculum on real students. Feedback from Lancaster’s first BSc and MChem cohorts, who graduated in 2016 and 2017 respectively, has been part of their curriculum development. ‘They have been really open and honest with us about what they thought was working and what they thought wasn’t and so we’ve changed things in response to that,’ says Michael. Student feedback at Leeds has also been positive, particularly for the open-ended experiments, says Nimesh. ‘I think students see how they are learning and [how it will] help their future career plans.’

Rachel Brazil is a science writer based in London, UK