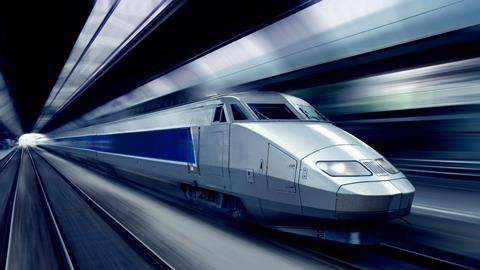 Discover the remarkable chemistry at the heart of train technology

The UK’s rail network is a modern colossus, made up of almost 10,000 miles of track and more than 2500 stations, with passengers completing around 41.5 billion miles of journeys every year. But the railway network wasn’t built overnight and science has always been at the heart of its development.

‘Railways go back to at least 1604 in the UK, when Huntingdon Beaumont built a wagonway with wooden wheels and wooden rails in Nottingham,’ explains Bob Gwynne, assistant curator at the National Railway Museum in York. The wooden wheels soon evolved into wrought iron but, Bob says, they could very easily shatter, so steel became a priority for early railways – and with it came chemistry. By 1864, less than eight years after the Bessemer process was discovered to mass-produce steel, the London and North Western Railway company employed a chemist to make improvements.

By the 1960s, chemistry had become so integral to the rail network that it accounted for more than half the staff at the UK’s Railway Technical Centre in Derby

‘The railways very swiftly employed metallurgists to figure out how long rails would last,’ Bob says, ‘and then they quickly went on to do other things, too. Steam engines basically run by boiling water and you must deal with impurities because, if the water foams, it starts to affect how the machine works. And all these moving parts need oil, right? They started off using tallow – cow fat – but they swiftly moved on to using hydrocarbons (creosote from coal tar).’ By the 1960s, chemistry had become so integral to the rail network that it accounted for more than half the staff at the UK’s Railway Technical Centre in Derby.

But this was only the start. Today, science remains at the heart of every train journey – and some incredible chemistry is needed to keep things running on time.

Demonstrate the explosive thermite reaction to excite learners about the possibilities that chemistry holds for solving everyday problems. You can also get them up close with metal displacements by investigating the reactivity of different metals in a microscale practical.

At its heart, a railway is an anti-friction device, with the contact point between the train and the track only about the size of a thumbnail. This means that, thanks to simple physics, a single person could move the entire, almost 100-tonne, Flying Scotsman with a single bar of metal.

That doesn’t mean the science is simple. ‘The interface between the rail and the wheel is one of the most complex in engineering,’ explains railway engineer and writer Gareth Dennis. ‘You’ve got a huge amount of force going through an area about the size of a five pence piece; all that weight of the train, but also dynamic forces as it goes over bumps and steering forces too. That’s enough pressure to liquify steel. And, indeed, you get the steel stretching out over huge distances, in a process called ratchetting.’

This makes choosing the right alloy of steel critical to a railway’s safety and long-term maintenance. ‘The crystalline structure of the actual rail, particularly at the surface, has a major effect on its behaviour,’ Gareth says, ‘as well as the likelihood of fatigue happening, so you need a good understanding of the actual chemical makeup.’ In rails, the most common crystal structure used is pearlite. This is created during the steel manufacture process, by slowly cooling the iron–carbon alloy to get alternating layers of different phases of steel. The result is an incredibly hard-wearing alloy that’s also used to make the cables in suspension bridges.

But the contact point with the train at the top, or head, of the rail is only half the battle. Typically, corrosion happens at the bottom, or foot, where salt and debris gather – particularly in areas such as level crossings, coastal routes or tunnels. ‘So, you’ve got to have a rail that’s corrosion-proof,’ Gareth says. ‘There’s a product called Zinoco, which contains zinc and is a sacrificial coating that goes around the foot of a steel rail to minimise the big corrosion effects.’

Use this fun spin on a classic game to consolidate learning about the reactivity series of metals.

Download the teacher notes, including the printable snap cards and reactivity series strips and the formative assessment grid from the Education in Chemistry website: rsc.li/3tEFzNl

You need to consider all this before thinking about how to join the rails together in straight lines. ‘Rails don’t just float in midair,’ Gareth says. ‘They must connect to each other. So, we use induction welding and flash butt welding, which are basically methods that use extreme heat and then smoosh the two rails together. But there’s a third type, which is very common – particularly on-site – because it’s easy to put together and doesn’t need expensive equipment. That’s aluminothermic welding, using a material called thermite.’

This process, as the name suggests, uses an exothermic oxidation-reduction reaction to create intense heat. Aluminium is a highly reactive metal, looking to gain electrons. Thermite, which is a mix of aluminium and iron(III) oxide (ie rust), takes advantage of this. Although thermite is stable at room temperature, when it’s heated to ignition temperature the aluminium and iron oxide react to produce iron and aluminium oxide: 2Al + Fe2O3 → 2Fe + Al2O3.

This produces a temperature of around 2500°C, melting the reduced iron and allowing engineers to pour it onto the track and create the intense heat needed to melt the steel and join the rails together.

The chemistry doesn’t stop there, either. The rail network depends on junctions, where tracks cross each other, creating an exposed end for the wheel to pass through. ‘That means,’ Gareth explains, ‘you need a thing that hits the wheel, called the nose. Mostly that’s a solid lump of metal. We take this metal and blow it up repeatedly: a process called explosive hardening.’ Once again, this process – repeatedly deforming the steel and reforging it – changes the crystalline structure, making it even harder and more resistant. ‘Sometimes, we use a higher quantity of manganese in the steel to make it harder, so there’s a huge amount of chemistry going on.’

‘If Beaumont came back from the dead and stood at the end of a platform, he’d still recognise the system he started in 1604’

All of this assumes that the rails operate perfectly, but there are problems that can occur due to weather or unforeseen circumstances. In the UK, one of the most-ridiculed problems is delays caused by leaves on the line. It’s a problem that shouldn’t be underestimated, though.

‘This is actually a fun bit of chemistry,’ says Gareth. ‘Leaves on the line are a huge problem for a variety of reasons: they get crushed by that extreme pressure we’ve talked about, creating a very fine layer of squashed leaf mulch. That creates two problems.

’First, it’s an incredibly effective lubricant and, as we’ve said, the railway relies on low friction, so anything that alters that has a major effect on the railway – the 2021 Salisbury rail crash happened because of a massive loss of adhesion.

‘The other problem is that leaf mulch is non-conductive. A lot of our signalling systems rely on the ability to conduct electricity through the wheel of the train into the rails; the train completes a circuit and allows signallers to know where it is on the track. If you have a situation where leaf mulch is preventing that, the train is going to be invisible to the signallers and that is obviously very dangerous.’

Once again, the answer is chemistry – this time in the form of sandite, a mix of sand, ethylene glycol (also known as antifreeze) and steel grit that’s squirted from the bottom of a specialist train to prevent mulch formation and add grip. This works to disperse the mulch should it appear, allowing the train to maintain its fragile contact with the rail and keep the train from derailing.

Compared with the focus on rails, train technology is surprisingly recent – we’ve only really begun to look at how carriages are constructed in the past 50 years, moving away from wood and steel into lighter materials – although not because of weight. ‘We’ve moved toward plastics,’ Gareth says, ‘because they’re easier to clean and they’re less flammable. When it comes to trains, we’re really looking at their performance in crashes or on fire, or when it comes to being cleaned.’ This is because modern technologies used in other industries aren’t good for trains. Carbon fibre, for example, isn’t particularly useful because, although it’s light, it’s very brittle and would break apart. Graphene is also not a major consideration right now. In fact, Gareth adds, one of the main areas of development for trains is something entirely different. ‘Paint has been a serious project over time,’ he says. ‘There’s been more than 100 years of research looking into paint and finding substances that don’t fade under prolonged UV exposure.’

This doesn’t mean train research is resting on its laurels. Currently, one of the hot-button topics researchers are looking into is maglev, or magnetic levitation, trains. These use two sets of electromagnets, one to repel a train off the track (lifting it by about 10 centimetres, causing it to hover) and another to propel it forward. With such reduced friction, trains can muster even faster speeds than a modern bullet train – the Shanghai maglev in China currently travels at around 270 miles per hour.

Could it be that the chemistry of steel is soon to be replaced by the physics of electromagnets? ‘It’ll never take over,’ says Bob. ‘Everybody looks at maglev because it goes fast. Sure, it does: if you’re prepared to shoot 200 people at 400 miles per hour down a dedicated track. But a steel wheel, on a steel track, can move 1000 people at 200 miles per hour. It’s hard to see where the demand lies.’

For now, then, it seems our train lines are here to stay – an improved version of a system that’s worked for centuries. ‘If Beaumont came back from the dead,’ Bob says, ‘and stood at the end of a platform, he’d still recognise the system he started in 1604.’ Recognise it, yes. But he’d still marvel at the amount of chemistry going on as the modern trains rush past.