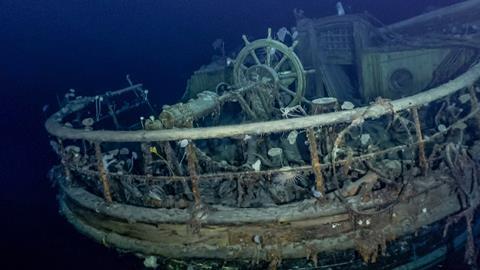 How archaeologists preserve vessels raised from the seabed

In March 2022, the world was captivated by the haunting sight of a ship frozen in time. More than 100 years after it had been abandoned by polar explorer Ernest Shackleton, the wreck of Endurance was found, more than 3000 m below Antarctica’s Weddell Sea. Far from being the typical image of shipwrecks devastated by time, Endurance was almost perfectly preserved under the ice floes. Yet, Endurance’s incredible state is almost an exception in the science of the world’s three million shipwrecks – and the story gets even more complicated for the few vessels brought to the surface.

The state of a shipwreck depends on a host of factors: how long it’s been underwater; the materials it’s made from; the depth, temperature and currents of the water; whether it sank in fresh or salt water. These factors also affect the kind of creatures that will try and make the wreck their home and that are responsible for most of the damage and degradation. Endurance was so well preserved because the microorganisms that typically devour a wooden wreck do not live in the cold, hostile waters of the Antarctic.

Your 11–14 learners should be familiar with rusting as a reaction and the factors that affect the rate of rusting. Ask learners to consider these factors in the context of shipwreck salvage operations. Can they identify the factors that might affect the condition of shipwrecks and discuss what this might mean for the cost, equipment and safety involved in raising an iron or steel-hulled wreck?

Humans also play a role in breaking up wrecks, with divers visiting sunken vessels (sometimes illegally) to remove historic artefacts or valuable materials such as copper wire, treasures or bronze propellers. Underwater salvage can also serve a vital role for science. For example, modern steel can’t be used to make the sensors on space satellites as it is contaminated during manufacture by radioactive caesium in the atmosphere, left behind by atomic bomb tests in the 20th century. To get around the problem, sensors are built using steel from the wrecks of old battleships that were built before atomic weapons existed. 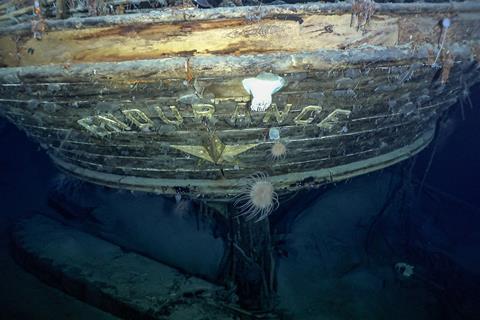 It could just as well be called Perseverance, given what Ernest Shackleton’s ship has endured in the Antarctic

Ultimately, most shipwrecks will remain underwater. Bringing a ship to the surface is expensive, so the few that are recovered have a unique combination of historic importance; protection from the ravages of sea creatures; currents and time; and obtainability. Sadly, that means Endurance will never be recovered. Antarctica is too remote and the wreck too deep for anything more than a passing visit.

For the lucky few that are raised, the challenge – and expense – of looking after them is just beginning.

The most famous recovered wreck in the UK is the Mary Rose, the flagship of Henry VIII, which sank in battle off Portsmouth in 1545. ‘The ship was under the seabed, which eventually cut off oxygen, that’s why it survived,’ explains Eleanor Schofield, a professor at Imperial College London and deputy CEO at the Mary Rose Trust. ‘The typical organisms that degrade the wood can’t operate and things like iron cannon cannot rust. Although the wood doesn’t look too degraded, this is a bit deceptive, because the wood’s wet. Cellulose and hemicellulose are the main components of wood, which are eaten away because they are a sugary food source for bacteria. That leaves a void in the cell walls, which is filled by water. I tend to say it’s not wood any more because of what else is in there! It’s got junk in it from the sea and any corroded artefacts nearby.’

Explore the factors that affect the rate of rusting in the context of shipwrecks. Learners produce a concept cartoon and plan an experiment.

The Mary Rose sank in relatively shallow water and had been located several times (including by several Victorian expeditioners who stole trophies and even used explosives on the wreck) before it was raised in 1982. This meant the challenge wasn’t just how to raise the Tudor warship, but to prevent its wooden beams collapsing. Fortunately, the team was able to use knowledge gained by groups who had worked on similar wrecks, such as the Vasa in Stockholm, Sweden, and the Bremen cog in the German Maritime Museum, Bremerhaven, to know how to protect the ship’s structure. ‘Initially, it was sprayed with just water – cold water, at 5°C, to stop any bacterial activity – so it didn’t dry out,’ says Eleanor. ‘If you’d sprayed it at 19°C, it would have become a hotbed for all kinds of stuff. It was then turned upright, the decks were reconstructed with titanium supports, then the PEGs started in 1994.’

Polyethylene glycol (PEG) is a water-soluble long chain hydrocarbon that, once dry, turns waxy, replacing the water in the wood and at higher grades provides a protective coating on the outside. This had to be sprayed continuously over the Mary Rose for 19 years before the hull could be left to air-dry – and even then, the Mary Rose’s wooden beams still contained about 100 tonnes of water. ‘We started off with a tank of water,’ Eleanor explains, ‘then started gradually adding the PEG; you don’t want to add it too quickly because it has a different viscosity, which would push water out of the wood cells and cause damage that way. In 2006 we switched to a higher-grade PEG. The idea is that the low-grade PEG went deep into the wood and plant cells, then the higher-grade PEG sealed the surface.’

Conditions weren’t fun. ‘It was 98% humidity, and about 30°C,’ Eleanor remembers. ‘We were working on the ship for a year [while it was being sprayed] to prepare it for drying. We’d also be checking pumps and filters, heaving massive bags of PEG into the spray tank and dumping biocide into the system to make sure we didn’t get outbreaks of legionnaires’ disease – this is the industrial side of conservation!’ 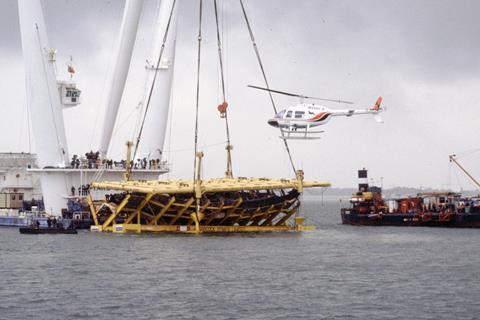 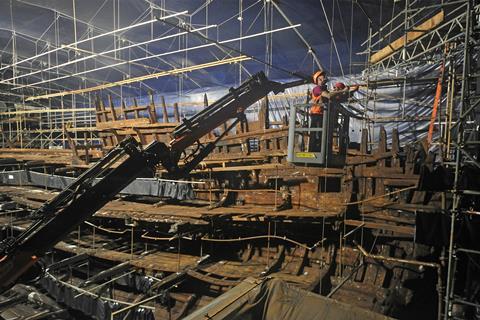 Decades after it was raised from the seabed, the Mary Rose was still being cared by science, to carefully conserve its wooden structure 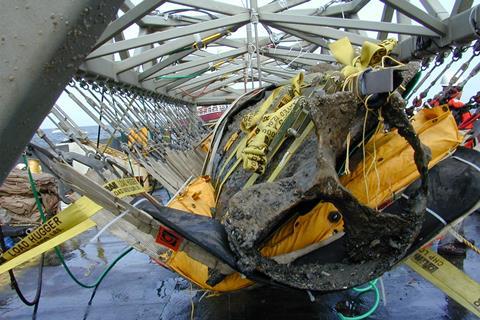 When the Hunley was discovered, shells and barnacles had colonised the corroding metal protecting it. But then the archaeologists set about removing that protection

Source: © Friends of the Hunley via Getty Images 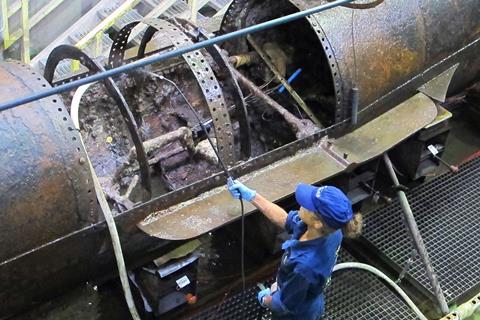 A solution of 1% sodium hydroxide preserves the metal hull of the Hunley submarine, which sank in 1864 and was raised in 2000

One of the oldest metal ships currently undergoing conservation is the Hunley, a US civil war Confederate submarine that sunk in Charleston harbour in 1864. It was finally located in 1995 and raised in 2000. But that was only the beginning of the story. ‘When a ship goes down, you start having corrosion of the metal from the salt water,’ says Johanna Rivera, the Hunley’s lead conservator and a professor at Clemson University, US. ‘Eventually, as the wreck reaches an equilibrium with the environment, you have precipitates from the seawater itself and this allows a colonisation process of shells and barnacles over the metal. They start growing and forming concretions.’

These concretions, mainly made of calcium carbonate, are the remains of dead sea creatures and form a protective crust over a shipwreck. ‘It’s like rock,’ says Johanna. ‘That creates an anoxic environment, there’s no oxygen, which helps preserve the metal. But then along come the archaeologists! We break open the concretions and reintroduce oxygen, so the corrosion starts again.’

Once again, the marine environment – fresh or salt water, hot or cold and the depth the wreck settles – determines if concretions occur. For example, wrecks in the shallow, warm Mediterranean Sea are usually covered in concretions quickly, while the world’s deepest shipwreck, the USS Johnston – sunk during the second world war and now located more than 6400 m below the Pacific Ocean – is so clear of build-up it was identified in 2021 by the white service number painted on its hull.

It took a year for four people – armed with hammers, chisels and pneumatic drills – to remove the concretions on the outside of the Hunley’s 12 metre-long hull. By the end of the process, they had removed 1000 kg of marine life. Cleaning the inside of the submarine took another four years. To prevent the metal from rusting, a current was passed through the hull, while it was sprayed with sodium hydroxide to keep the metal wet and prevent corrosion. ‘Keeping the hull wet is very important,’ says Johanna. ‘If the metal dries out, the salts or chlorides trapped in the metal [from the seawater] would crystallise and then we wouldn’t be able to remove them. The sodium hydroxide extracts these salts into the solution by osmosis; which can be quantified, thus allowing us to calculate the salt content of the metal.’

While the bulk of the work on the Hunley is focused on the metal hull, the archaeologists also had to look after the remains of the crew and their personal belongings inside – often affected by the corrosion of the hull before the concretions were formed. This means even organic materials, such as shoes, can become rust-red from iron oxide that has leached into them. Of course, not all metals rust – which allowed the conservation team to confirm a story long believed to be a myth. The Hunley’s commander, Lt George E Dixon, was rumoured to have carried a $20 gold coin that had deflected a bullet at the Battle of Shiloh as a good luck charm, but there was no evidence that the story was true. And yet, in 2002, archaeologists found a gold coin near Dixon’s remains – engraved ‘Shiloh – April 6, 1862 – My life Preserver – G.E.D.’.

Today, the Hunley has been cleaned of sediment and concretions and it’s preserved in a tank where it can be kept submerged in a solution of 1% sodium hydroxide to desalinate the metal unless the team are working on it.

Although it’s now being air-dried, the Mary Rose also requires constant care and a dedicated team to protect it from decay. ‘We knew there was loads of sulfur in [the wreck],’ Eleanor says. ‘That was obviously going to oxidise when we started air-drying the ship and form sulfates or sulfuric acid to degrade the wood.’ The team are also battling corrosion in artefacts such as cannonballs, as chlorine from the salt water has seeped into the iron.

These challenges aren’t going to be solved overnight. Preserving a shipwreck is the work of decades and the conservationists in charge know they’re dedicating their lives to the vessels they’re responsible for. Yet, through their work, future generations will be able to see glimpses of the past and pay homage to the men and women who braved our seas.

Article by Kit Chapman, an award-winning science journalist and author. Resources originally appeared in the book Chemistry for the gifted and talented by Tim Jolliff; updated July 2022 by Holly Walsh and Kirsty Patterson