The first instrument to provide mass spectra comparable to today's examples was built by Sir Joseph John (J. J.) Thomson at the Cavendish laboratories in Cambridge in the early 1900s. A physicist/mathematician by training, Thomson spotted that his method would have considerable potential in chemistry. This is the story of his discovery. 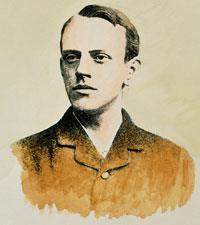 At the end of the 18th century experimental scientists were aware that a spark generated electrostatically could travel longer distances in a partially evacuated glass tube than in air. The phenomenon began to receive rigorous scientific study in the mid-19th century with the advent of induction coils that could provide high voltages sustained over long periods of time and the availability of high capacity batteries to power the induction coils.

In 1858, professor of physics at the University of Bonn, Julius Plücker, while investigating the action of a magnet on the electric discharge of rarefied gases, observed a cathode-induced green fluorescence on the glass walls of a discharge tube.1 This was early evidence of 'cathode rays', though nothing was known of their properties. Some years later, in 1886, the German physicist Eugen Goldstein noticed that if he used a perforated cathode, then in addition to the cathode rays between the anode and the cathode, there was a different type of ray emerging from the holes in the cathode, and moving in the opposite direction to the cathode rays. If the cathode was relatively thick, they would appear as a parallel beam. On account of their appearance, Goldstein named them Kanalstrahlen, which means 'canal rays'.2a Unlike the cathode rays, the colour of the canal rays depended on the identity of the residual gas in the tube, though the significance of this observation was not appreciated at the time. Using the strongest magnet he had, one that certainly had an effect on the cathode rays, Goldstein attempted to deflect his canal rays, but he observed no change in path. 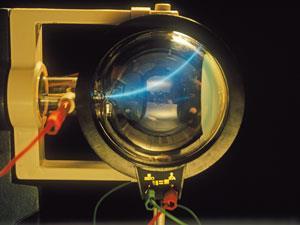 Joseph John Thomson was born in Manchester in 1856. He studied engineering at a local college, later to become the University of Manchester, and went on to Trinity College Cambridge in 1880 where he graduated in mathematics. In 1884 he became Cavendish Professor of Physics at Cambridge, where his research focused on the conduction of electricity by gases. 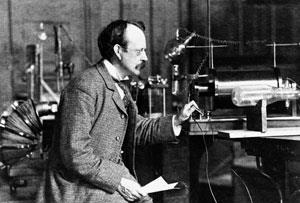 Thomson in his laboratory

In a series of experiments using cathode ray tubes, Thomson concluded that cathode rays were particles with a negative charge and much smaller in size than an atom. Thomson published this work in 1897, for which he received much acclaim - he was awarded the Nobel Prize for physics in 1906 for this work, and was knighted in 1908. His negative particles were later renamed 'electrons'. 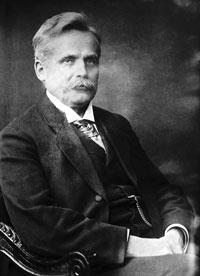 One year later, in 1898, Wilhem (Willi) Wien, while working as an assistant to Hermann Helmholtz in Berlin, was inspired by Thomson's work and began his own investigations into cathode and canal rays. Using very powerful electromagnets, he observed that the canal rays deflected in a direction opposite to the cathode rays, which implied they carried a positive charge of electricity, and this led them to be renamed as 'positive rays'.

Using a magnetic field of 3250 'CGS units' (probably gauss) and a electrical field of 2000 V, applied in the same direction of the magnetic field, Wien's positive ray showed a deflection of 6 mm.3 He deduced (but does not give a calculation to show how) that the rays consist of a particle beam with m/e ratio of 3.2 × 10-3 'CGS units'. Interestingly, 100 years later, Wien's relative, Karl Wien, working at the Darmstadt Institute for Nuclear Physics, reworked the figures in modern units and obtained the m/e  ratio as 3.2 × 10-7 kg/C, which corresponds to a value of 30 amu, assuming singly charged particles.4 Presumably, Willi was working with residual air in his tube, a mixture of nitrogen and oxygen (28 and 32 amu, respectively).

Following on from Willi Wien's discovery, Thomson published a paper at the end of 1899, revealing his interest in positive rays. Referring to Wien's results, he says:

I am engaged with some experiments on the effect of the magnetic field on the convection of electricity by positive ions.. From the results I have already got, it is clear that  m/e  for the positive ions produced by an incandescent wire must be at least 1000 times the value of negative ions [ ie, electrons], and this is only the inferior limit.5

Thomson decided to work, essentially, with Wien's apparatus, but with one important difference: he allowed the positive rays to impinge on an oscilloscope-like screen at the end of the tube. Coated with a material that fluoresced when hit by the rays, it enabled the deflections induced by the electrical and magnetic fields to be recorded more accurately. Later variations used photographic films to record on, thus giving a permanent record of the experiments. 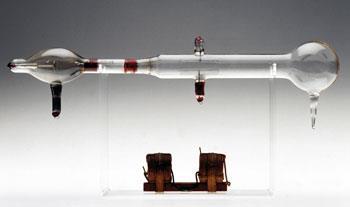 The deflection in the y-direction depends on the magnetic field (B), and along the x-axis by the electrical field (E). Simple manipulation of equations (i) and (ii) eliminates v, the velocity term, from the equation.

Equation (iii) implies that a particle with a specific e/m  value (or m/e) will have a specific position on the xy screen plane, and another particle with a different e/m value (but holding B and E constant) will record in a different position.6 The positive rays, however, will comprise particles with a range of velocities. Thus in reality, species with a single e/m value will have a dependency on v2 in the x direction and v in the y direction. The net effect is that they will record as portions of a parabola, with a separate parabola for each e/m species present.

Using this method, Thomson soon identified the positive ions from H2, H and He. His mass spectrograph later (in 1913) showed that neon has a relative atomic mass of 20, but was always accompanied by a much weaker parabola associated with mass 22.7 He suggested various possibilities (eg doubly ionised CO2 impurity, or the presence of a hydride NeH2), but soon hit on the notion of a heavier isotope of neon, thus accounting for the non-integral measured atomic mass of the gas, 20.2.

Thomson was, however, dissatisfied with his photographic method of recording the parabolas. The problem was that lightweight species penetrated the film deeply, causing a disproportionate amount of blackening, compared to heavier ions, and thus quantitative estimations of beam intensities were impossible.

He eventually solved this problem by constructing a slit in the tube where the photographic film would normally sit. Behind this slit was a Faraday cup that collected any ion charge. The intensity of the charge was estimated by noting the time it took for a charged electroscope to discharge. By slowly changing the magnetic field, the ion beams could be positioned, one at a time, on the slit, and their intensities noted. From his results he plotted intensity against relative mass: Thomson had invented the world's first scanning mass spectrometer.8 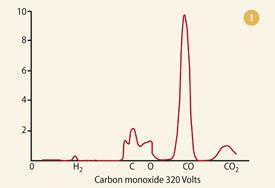 Leaving his protégé, Francis William Aston, to concentrate on determining the isotopic constitution of any elements he had to hand, Thomson decided to record the mass spectra of some chemical compounds, including slightly impure CO, HCl and carbonyl chloride (COCl2). The first of these is shown in  Fig 1.8 Note the abundant peak of the undissociated molecule, together with the smaller peaks at 12 (carbon) and 16 (oxygen) - an astonishingly good match with today's bar-graph version (see Fig 2).  The spectra of these species represented the conclusion of Thomson's work with positive rays and mass spectrometry. Administration (as master of Trinity College, Cambridge, from 1918) took the place of bench-work. However, he published, initially in 1913, his thoughts on the potential of his technique to chemical analysis.9 These he amplified in his 1921 book  Rays of positive electricity and their application to chemical analyses.10 In these publications he made observations/predictions, including: 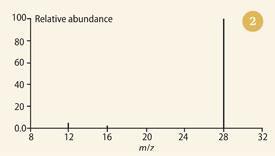 We can, by measuring the parabolas, determine the masses of all the particles in the [discharge] tube, and thuidentify the contents of the tube as far as this can be done by a knowledge of the atomic and molecular weights of all its constituents. When we find a new line we know at once the atomic or molecular weight of the particle that produced it.

[In conventional forms of spectroscopy] the presence of one gas is apt to swamp the spectrum of another.This is not the case to anything like the same extent with the positive rays; the presence of other gases is a matter of comparatively little importance.

The method is more sensitive than that of [other forms of] spectrum analysis. With. [my] apparatus the helium in 1 cm3 of air [ie, about 3 x 10-6 cm3] could be detected with great ease.

Positive rays may throw light on the structure of a molecule. For when a compound is in the discharge tube there are not only the individual atoms which went to make up the molecule, but also. combinations of these atoms: the proportions in which these combinations are present yield information about the configuration of the molecule. To take the case of C2H2Cl2.

Sadly, Thomson chose a poor example. The C=C bond is relatively strong and we do not see the fragmentation he postulates. In fact, there are hardly any differences between the mass spectra. Had he cited the hydrogenated versions of his molecules, CH2Cl-CH2Cl and CH3 -CHCl2, the differences would have been dramatic and diagnostic.

The founder of MS

If we define mass spectrometry as the deflection and separation of ion beams, and the recording of the masses of the particles constituting the beams, we see that Willi Wien pioneered at least one of these criteria - the deflection of the beam by magnetic and electrical fields.

Thomson's contribution was to take Wien's method and refine it to achieve separation of particles of different mass within a beam, and determine the relative abundance of the species concerned. In doing so, we suggest that Thomson was the real founder of mass spectrography (when he used a photographic method to record his results) and mass spectrometry (when he devised an electrical method of recording the intensity of the ion beams). His plots of ion intensity against relative mass, first published in 1912, were the world's first mass spectra. 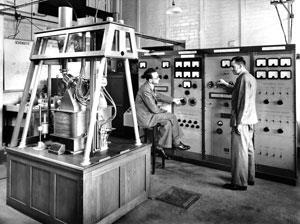 In the hands of later chemists, notably Carl Djerassi and Karl Biemann, mass spectroscopy (with the help of the sophisticated machines pioneered by Alfred Nier) became a powerful technique for the determination of organic structures.11

Combined with the technique of NMR, it has completely displaced the classical degradation methods for determining chemical structures that dominated organic chemistry when Thomson proposed the use of mass spectroscopy.12 Thomson may have chosen the wrong example, but his words were certainly prophetic and all the remarkable coming from a physicist rather than a chemist.

While Thomson's claim to have 'discovered' the electron is a matter of historical debate, his claim as the founder of the use of mass spectroscopy in chemistry is secure.

Most books and articles on mass spectrometry focus more on Aston rather than Thomson and the latter's pioneering work is best accessed from the primary literature. Benyon and Morgan's Development of mass spectroscopy; an historical account  provides a useful reference list.13 George Paget Thomson has written an account of his father's work on positive ray analysis, and includes photographs and diagrams of the apparatus used in his studies.14