When discussing the transition metals, it is the first-row (the 3d) that is the focus of attention. Yet in the second row there is a metal, molybdenum, which is essential to many of our current biological processes. Many scientists now believe that the concentration of molybdenum was the limiting factor in the evolution of life on Earth by controlling the rate at which the atmosphere became oxygenated. 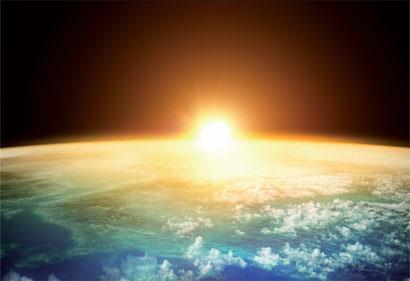 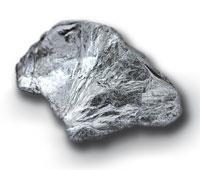 We tend to think of our current oxygen-rich atmosphere (21 kPa) as the norm, but for most of this planet's history, the atmospheric composition has been quite different. In fact, oxygen is a relative newcomer to our atmosphere. Until recently, it was thought that, as a result of photosynthesis, the level of oxygen gradually increased until it reached its present level. Now we realise that the situation was much more complex. We can look at the current state of knowledge.

In fig 1 we can see how the Earth's atmosphere became oxygenated in several stages, over a very long period of time. 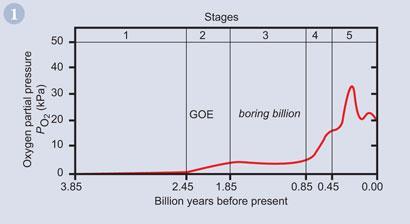 Figure 2 - Fossilised cyanobacteria. These specimens, from the Eocene epoch (55-38 million years ago), were found in Wyoming, US. Magnification x75

From about 3.85 to 2.45 billion years ago the Earth's atmosphere is believed to have contained nitrogen with some carbon dioxide, water vapour, and probably methane. If any oxygen existed at all, it would have been at less than a concentration of 10 Pa. The oceans, too, were anoxic (oxygen-free), though there may have been some oxygenated shallow seas resulting from the first photosynthesis by cyanobacteria (fig 2). It was the cyanobacteria which were the often forgotten heroes of life on Earth.2 The layered mats of bacteria, known as stromatolites, began the oxygenation of this planet's atmosphere. In a few locations, living stromatolites can still be found (fig 3). 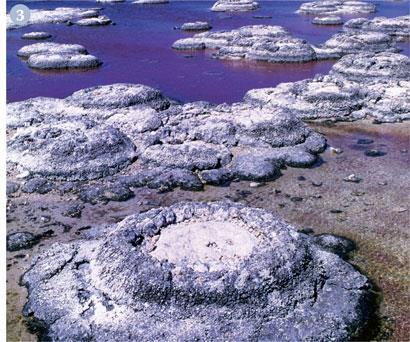 Figure 3 - Modern stromatolites. These cyanobacterial mats, found in Australia, are believed to resemble the earliest oxygen-producers on the planet

During Stage 2, from 2.45 to 1.85 billion years, atmospheric oxygen levels rose to between 2 and 4 kPa as the rate of photosynthesis increased considerably. As a result, the shallow seas became partially oxygenated but the deep oceans continued to be anoxic. The peak period for oxygen production occurred between 2.4 billion years and 2.0 billion years and is known as the Great Oxidation Event (GOE).

From 0.85 billion years to 0.54 billion years, the oxygen concentration rose until it reached close to the current level, somewhere between 10 kPa and 20 kPa.

Subsequently, it is widely believed that the oxygen level reached as high as 35 kPa during the Carboniferous period (0.36 billion years to 0.30 billion years) followed by a return to close to 20 kPa.

All living organisms require nitrogen. In the early life of the Earth, it is believed that, with the land seared by ultraviolet radiation, it was the seas where simple organisms first flourished. To survive and multiply, they needed pathways for transforming nitrogen from the dissolved nitrogen gas to more usable forms such as the ammonium ion or the nitrate ion. The ammonium ion in particular could, in turn, be used in the synthesis of amino-acids and other essential nitrogen-containing molecules. To convert nitrogen to other oxidation states, the organisms needed an enzyme capable of multiple electron transfer.

In the anoxic ocean, iron was abundant as the aqueous iron(II) ion. So the early cyanobacteria would have used iron(II) as the redox core of the nitrogen-fixing pathway.3 With the build-up of atmospheric oxygen (the 'waste product' from the cyanobacteria), mentioned in Stage 2,  the surface waters became oxygenated. In addition to exterminating much of the anaerobic life on Earth (sometimes called the oxygen catastrophe), the rising oxygen concentration oxidised aqueous iron(II) ion to insoluble iron(III) oxide. As a result, the sea floor became covered in banded layers of iron oxides. Iron, then, became a rarer element in the seas and inhibited additional photosynthesis during Stage 3.4 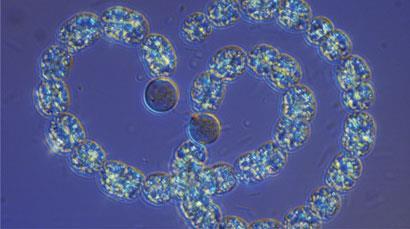 End of the boring billion years

It was the American scientist, Ariel Ambar and his colleagues, who took the proposal one step further, contending that the limiting factor for marine photosynthesis was the aqueous concentration of molybdenum.6 As evidence, he showed that during the euxinic period, aqueous molybdenum concentrations were very low, but at the beginning of Stage 4, the major rise in oxygen concentration coincided with an increase of aqueous molybdenum to nearly 300 ppm.

Fig 4 shows a correlation between ocean molybdenum and rising levels of atmospheric oxygen. 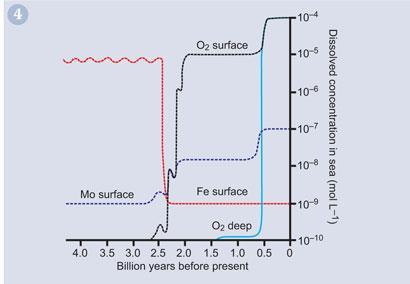 Figure 4 - Estimated aqueous concentrations of iron (red), molybdenum (blue) and oxygen (black) in seawater over the last 4 billion years of the Earth's history

The argument has therefore been made that as a result of the high aquatic concentration of molybdenum, organisms developed the highly efficient molybdenum-containing coenzyme, nitrogenase (Fig 5), as a means of fixing atmospheric nitrogen. With more rapid synthesis of amino acids, photosynthetic organisms could reproduce at a more rapid rate, significantly boosting oxygen production. In addition, as we shall see, the unique chemistry of molybdenum enabled the development of other enzymes in organisms, for example, for the assimilation and reduction of the toxic nitrate ion.7 It is now accepted widely that molybdenum availability could indeed have been key to increasing the rate of oxygenation of our atmosphere.

Why does molybdenum play key biological roles?8 The most thermodynamically stable form of molybdenum under oxidising and neutral conditions is the molybdate ion, [MoO4]2-. This ion has a high aqueous solubility, making it easily transportable in biological systems. In fact, it is argued that the molybdate ion is transported through cells by the same mechanism as the sulfate ion. To an inorganic chemist, it comes as no surprise that molybdenum(VI) and sulfur(VI) chemistry are related. One of the lesser-known periodic links is that between the highest oxidation states of an element in Group (n) with an element in Group (n +10).9 Molybdenum and sulfur have this linkage in that molybdenum is in Group 6 while sulfur is in Group 16. 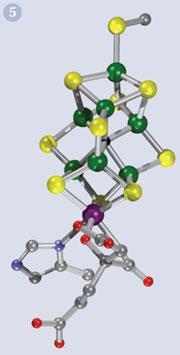 Few people are aware that molybdenum is an essential element for life. In fact, it is the metal with the highest atomic number that is required for key biological processes.10

For plant life, the context here, the most crucial molybdenum-containing molecule is nitrogenase. This is the enzyme in bacteria and algae which converts gaseous nitrogen to the ammonium ion, and is used by bacteria for protein synthesis.

The Fe7MoS9 metal-core of the nitrogenase cofactor is shown in Fig 5. The molybdenum atom (purple) is located at one corner of a cube also containing three iron and three sulfur atoms. This cubic arrangement, known as a pseudo-cubane, is an efficient and biologically-common redox core of many enzymes.

Where did molybdenum go?

Molybdenum(VI) can be reduced to the +5 and +4 oxidation states quite readily, and so its biological role seems to be that of an electron 'sink' in redox processes. In addition, molybdenum, like many of the high atomic number metals, has a predilection for bonding to sulfur and to sulfur-containing molecules as it does in nitrogenase and other enzyme systems. So why was molybdenum unavailable when the oceans became saturated with hydrogen sulfide? In euxinic aqueous solution, the sulfide ion can stepwise replace the oxygen atoms to give the soluble thiomolybdate ion, MoS42-. In turn, this ion can be reduced by bacteria to highly insoluble molybdenum(IV) sulfide, MoS2 (known by geologists as molybdenite). Only when the oceans became oxygenated could the molybdenum become bioavailable as the aqueous molybdate ion.

In the accounts of evolutionary biological processes on Earth, the roles of metal ions other than iron are usually overlooked. Yet molybdenum, and other metals, play key roles in biological processes. Now we have strong, but not yet conclusive, evidence that molybdenum was the limiting reagent in the development of life forms on this planet.