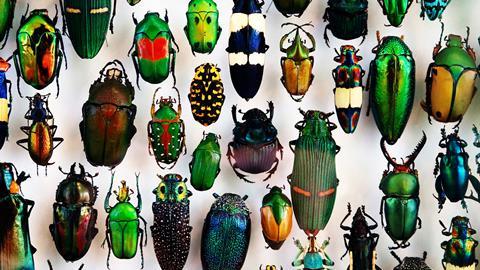 Hayley Bennett investigates the structural secrets of colourful animals, and finds out chemists are using new knowledge of nature to access colour beyond pigments

The rainbow of colours on a soap bubble, the blue flash on a jay bird’s wing or even – check it out – the entrancing tones of a colour-shifting squid aren’t the kind of colours you can buy in a tin of paint. These colours don’t come from pigments, but from the very structures of the bubble, of the feather hairs and of the squid skin. So-called ‘structural colours’ have broadened and brightened nature’s colour palette for millions of years, and yet we are only just discovering how these colours are made. Armed with this knowledge, scientists could make colourful materials depending not on what the molecules are, but how they are arranged.

The rainbow of colours on a soap bubble, the blue flash on a jay bird’s wing or even the entrancing tones of a colour-shifting squid aren’t the kind of colours you can buy in a tin of paint. These colours don’t come from pigments, but from the very structures of the bubble, of the feather hairs and of the squid skin. So-called ‘structural colours’ have broadened and brightened nature’s colour palette for millions of years, and yet we are only just discovering how these colours are made. Armed with this knowledge, scientists could make colourful materials depending not on what the molecules are, but how they are arranged.

What you might think of as ‘ordinary’ colour comes from pigments and the hue depends on the pigment molecules. For many thousands of years, humans have relied on natural pigments to make dyes and paints. Most colours were traditionally ground up from minerals or, occasionally, extracted from plants and animals. Purple, for example, from the sticky excretions of molluscs, was extraordinarily difficult to get hold of and therefore expensive right up until the 19th century, when chemists started producing it synthetically. 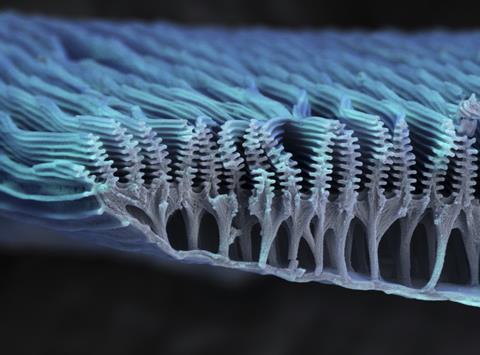 Structural colour too depends on the colour of the light reflected. However, here the reflections are manipulated by the structures in the material. The structures are several-hundred nanometres and so just the right size to interfere with the wavelength of visible light. Cambridge University’s Silvia Vignolini suggests it’s easiest to envisage in a soap bubble. ‘When you have soap – the liquid, the water and soap solution – it is perfectly transparent,’ says Silvia. ‘But as soon as you create a bubble out of it, you start to see these different colours, the colours of the rainbow. If you look at it carefully, you see that if you change the angle of observation, the colours change.’ This is structural colour because the colours we see don’t depend on what molecules are in the soap solution but on the thickness of the film creating the bubble. It controls the colour of the reflected light and, because it is not uniform, we see a whole rainbow of colours. The colours change as the bubble moves or as we change our perspective. Similar rainbow effects can be seen in the wings of some insects, and it’s known as iridescence.

Combined with pigment colour, structural colour gives nature access to the most extraordinary array of colours

According to Silvia, to really understand the concept we should think of light as waves that are either transmitted or reflected when they hit a transparent surface. When light waves hit a bubble, some of them bounce straight off the top surface while others carry on through the film, bouncing off the bottom surface instead. If a top and a bottom-bouncing wave leave the bubble in-step – with wave troughs and peaks matching – they reinforce each other and intensify their colour. This is known as constructive interference. But if they leave out of step, they can destroy each other; this is called destructive interference. Depending on the thickness of the film and viewing angle, different wavelengths are enhanced and suppressed.

In nature light often hits not just two surfaces, as in the bubble, but several surfaces within layers of biological material such as proteins. As Silvia explains, natural structural colours often come from nanoscale layering of biological materials in an A-B-A-B-type fashion, as in the iridescent green beetles she works on. ‘Every interface has a reflection, so you can imagine that if you add multiples of these interfaces, you add reflection, so you can increase and pump up one colour.’ Combined with pigment colour, structural colour gives nature access to the most extraordinary array of colours. Many species layer pigments on top of structural colours or vice versa, either to create contrast or to mix colours that aren’t so readily made by one route or the other. 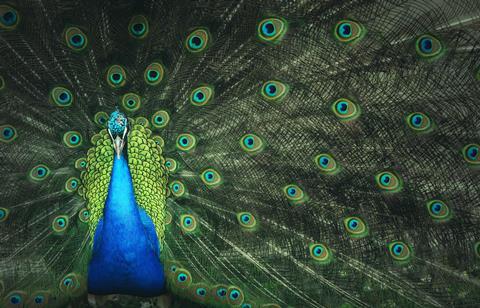 The phenomenon of structural colour depends on the wave theory of light, which was the brainchild of 17th century scientist Robert Hooke. He recognised that some colours in nature originated from structure rather than pigment, having examined many different biological specimens under his microscope. In his book Microphagia, he wondered at the ‘beauteous and vivid colours’ of peacock feathers and concluded that these colours depended on the ‘fineness and transparency of the reflecting and refracting parts’. We now know that Hooke’s peacock feathers got their blue and green sheen from the regular, lattice-like structures of melanin and keratin proteins within each feather. Such well-ordered structures, also found in butterfly wings, are known as photonic crystals. Because of the precise way they control light, scientists working with photonic crystals are developing them for use in solar cells and medical sensors.

However, not all structural colours come from such regimented structures, and not all are angle-dependent and iridescent. Some are produced by more relaxed arrangements. The face and rump of the mandrill, for instance, are brightly coloured but matte – a result of loosely organised collagen fibres in the monkey’s skin. The blue patch on a jay bird’s wing is another example. In 2015, Andy Parnell at University of Sheffield, UK, studied the structure of the keratin protein network in the jay’s blue patch. ‘We used X-rays to look at the structure inside the feather,’ he says. ‘It’s a spongy structure, so there’s a series of holes and those holes have an approximately similar size. They’re distributed in all different orientations, so it’s not like a peacock’s feather where they’re set down in layers and they form like a crystal. These are not crystalline structures. They’re weakly ordered structures.’

Inshore squid … are able to change the colour of their skin – in response to a predator or potential mate, for instance – accessing any colour in the visual spectrum in the blink of an eye

Interestingly, Andy’s research also suggests a reason why nature rarely produces non-iridescent greens through structural means. Analysis of the jay’s blue showed that the feather barbs reflect a broad range of light wavelengths going from blue to white. Green, on the other hand, only appears when the reflections are in a much narrower range of wavelengths. It requires a more complicated structure to reflect in such a narrow range – one that nature struggles to make. In birds, Andy says, matte greens are commonly made using a combination of blue structural colour and yellow pigment. However, there’s one example of a beetle that can make the necessary structure. The African longhorn beetle makes a geometric, ball-and-stick-type structure akin to the atomic models used in chemistry labs. Despite its well-ordered structure, the green is matte and not iridescent like you would expect. While the structure appears well-ordered when viewed at the nanoscale, it is actually fragmented at the microscale.

The structures that birds and beetles produce to manipulate light can be surprisingly complex, but it’s nothing compared to colour-shifting iridescent cephalopods. Inshore squid, for example, do something so sophisticated that even Dan Morse can barely believe it. And Dan has been publishing papers about squid for nearly a decade at the University of California, Santa Barbara, US. These animals are able to change the colour of their skin – in response to a predator or potential mate, for instance – accessing any colour in the visual spectrum in the blink of an eye. Dan has had plenty of opportunity to observe the animals in action and says they’re able do it ‘in the millisecond,’ and his team has spent years trying to tease apart the molecular mechanisms responsible. 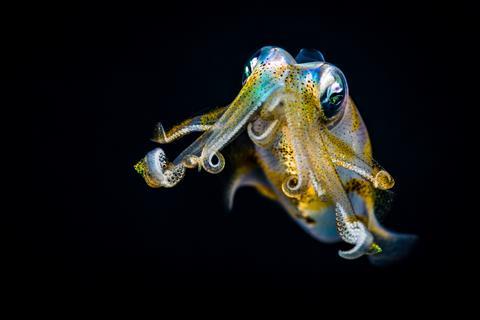 If structural colour relies on structure, then a colour-changing squid must make a structure that can change – something dynamic. To understand how they do it, Dan’s team studied the skin cells that give the squid their iridescent glow and discovered the shape of the cells is key. Imagine each cell as a many-fingered glove. The fingers align to create structural colour just like in other species, but they can also open or close to change the spacing between them. The squid’s ability to tune this spacing to reflect any wavelength of light allows it to change the colour of its skin. But how does the squid exert such fine control?

It turns out that the other key component to the squid’s colour craft is what’s packed inside the fingers: reflectins. These specialised proteins are like a string threaded with alternating beads, although, in this case, the beads are more like springs and magnets. It creates the perfect balance between collapsing and extending, explains Dan: while the springs coil to collapse the protein, the magnets repel each other and force the protein to extend. The magnets are actually protein segments with a positive charge, and by varying that charge, the extension can be finely tuned. So, say a nerve impulse arrives at the reflective cells. This triggers a cascade of molecular events that ends in some of the positive charges being neutralised. Now the springs can collapse and the protein strings can fold and aggregate to form bigger, tighter particles. All these changes reduce the total number of particles in each cell, which in turn changes the osmotic pressure, forcing water out and causing the cell to shrivel like dehydrating fruit. ‘We can recapitulate all of this process in the test tube and watch as the proteins progressively condense, coil and assemble,’ says Dan. ‘And the more we neutralise it, the bigger and bigger the [protein particles] become. So it’s a graded, or tuneable, response.’ For him, the reflectins are ‘molecular machines’, driving an osmotic motor.

Synthetic biologists and materials scientists could learn something, as could researchers working on the colour display screens of the future

As if that weren’t enough, the same animals can also use tiny muscle fibres to switch pigment colours on and off in a separate set of cells. The two systems combined give them a range that is unparalleled in the natural world. Synthetic biologists and materials scientists could learn something, as could researchers working on the colour display screens of the future.

Currently though, it’s paint and cosmetic companies that are getting excited about structural colour. Andy’s group is already working with AzkoNobel, the company that makes Dulux paints, on polymers to replace titanium dioxide – the white pigment in white paints. Meanwhile, Japanese researchers inspired by birds’ structural colours have produced a full spectrum of brightly-coloured nanoparticles from just synthetic melanin and silica. In theory, as long as the materials themselves don’t degrade, the colours shouldn’t either. So, this approach provides potentially longer-lasting colour than traditional pigment colours.

As Silvia says, ‘It seems silly, but everything that people use is coloured, right? And you have to have something to colour it with.’ She wants to learn, from nature, how to make hard-wearing colours using structure instead of pigments; colours that would be more eco-friendly than the synthetic pigments we currently use. So the goal, a little like in squids, is using the same material to make any colour you can imagine. In our case, though, it might take more than a few milliseconds.

Hayley Bennett is a science writer based in Bristol, UK