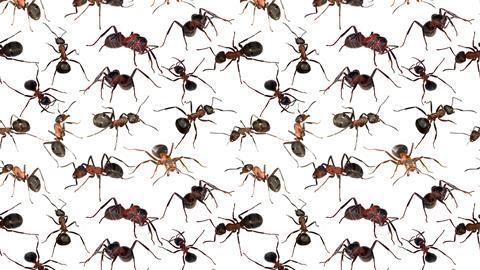 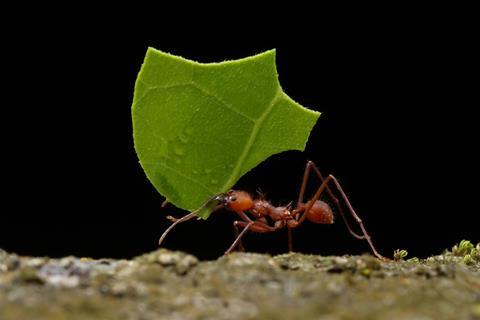 Many people cram duty-free goodies into overhead lockers before a flight but Ted Schultz is more likely to insert a bag containing live ant colonies collected during a research mission. From his base at the Smithsonian Institution’s National Museum of Natural History, Ted travels far and wide across Central and South America collecting ants for lab research. He never tells the other passengers what’s in the bag. ‘Nobody needs to know,’ he jokes.

Back in the lab, he is building evolutionary family trees for the ants as well as collaborating with chemical ecologists and biologists.

This article is rich in scientific detail; some of it may be difficult for your students to follow. We recommend that you read through it together as a class so you can explain as you go. Download it as MS Word or pdf.

With a particular interest in rare species, Ted peruses museum ant collections for rare specimens that take his fancy before revisiting the original spot where they were identified. ‘Often these places still exist but they are in no way the same habitat that they were in, say, 1890 so I have to find likely habitats in that area,’ he says.

During long collection trips, his team has to keep the ants alive in little nest boxes. ‘These colonies are very sensitive to temperature, humidity and airflow. When we stop somewhere to eat we take the ants into the restaurant with us,’ he says. Such dedication illustrates how important ant systems are to researchers in the field.

Ants are perfect subjects for biologists and chemists alike. ‘These little guys are just chemical factories,’ says Tappey Jones, an organic chemist at the Virginia Military Institute, US, who has worked with Ted. ‘They are a goldmine for new chemicals.’ Increasingly, researchers are hunting for new antibiotics among the chemicals.

Ants use complex chemicals for defence and communication. For the past 30 years, Tappey has been studying nitrogen-containing chemicals called alkaloids produced by ants. ‘A big part of my career has been figuring out the structural chemistry of these compounds,’ he says.

He works out how to synthesise the chemicals in the lab and frequently passes them to colleagues at other institutions so they can study them in real systems. 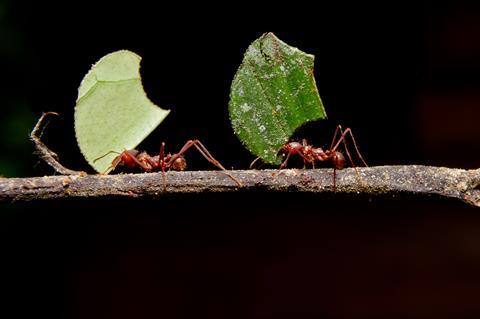 Ruled by queens, ants have a defined social hierarchy and know their place in life. Worker ants go out to forage for food, laying trails of chemical pheromones to tell their colleagues where tasty morsels can be found. Many of these chemicals are pyrazines, released from glands around the body, including poison glands and mandibular glands (mandibles are pincer-like mouthparts used to hold and cut food). The ants use left and right antennas to tell them which way to turn to follow the pheromone trail. When an ant is squashed it releases a different pheromone that warns others of potential danger.

Ants have developed sophisticated ways to protect their colonies from invasion from all manner of pests, including other ant species. With poor vision, the insects mainly use their antennas to recognise nest mates and potential intruders by sensing their chemicals, although the system is far from foolproof. When intruders are detected they are torn to pieces with mandibles or exposed to venom.

The insects largely recognise their nest mates from patterns of long-chained cuticular hydrocarbons (CHCs) present on their hard, waterproof exoskeleton. A colony’s odour profile is partly determined by its genetic make-up but is also influenced by environmental factors such as nest material and diet.

This worksheet combines short comprehension questions with material that links to biology and with literacy activities, including a piece of extended writing. If your class understands food chains, webs and adaptations, you will be able to go into more detail on some of the questions.

An ant is thought to be able to rapidly compare an approaching ant’s odour profile with one that it has filed for its own colony – a neuronal template. Since the colony odour changes over time, the ants regularly update their neuronal templates.

Parasites, including other types of ants, often try to sneak into a colony by mimicking the chemical profile. Others build the right mix of CHCs by spending time in the nest material (chemical camouflage). Some parasites can also produce chemicals to attack or confuse ants in a colony, disrupting their recognition and defence behaviour.

Caterpillars of Large Blue butterflies are astonishingly good at camouflage. They sneak into red ant colonies by producing the perfect blend of chemicals. The ants fall for the act and carry the caterpillar deep into their nest where it is fed and cared for. Once inside the nest, the caterpillar adds in extra hydrocarbons, ending up with a near perfect CHC match. It also makes sounds to mimic the queen ant.

Fungus-farming Sericomyrmex ants are commonly invaded by parasitic Megalmyrmex ants. In 2013, Tappey worked with a team led by Rachelle Adams at the University of Copenhagen to show that the ‘guest ants’ protect their hosts’ colony against an invading ‘agro-predator ant’ using alkaloid venom. The fungus-growers actually benefit from hosting the guest ants, who want to protect their cushy life in the colony.

In 2018, Rachelle, now based at Ohio State University, US, investigated how the parasite ants manage to infiltrate and integrate in the Sericomyrmex colony. Using gas chromatography–mass spectrometry, her team analysed chemicals from both sets of ants to build odour profiles.

They discovered that the parasite ants had very different sets of hydrocarbons, with only a single hydrocarbon shared between hosts and parasites. This ruled out mimicry and camouflage as infiltration tactics. But the parasite workers had a smaller concentration of CHCs on their cuticle to the host. The researchers suggest that the parasite ants manage to use an ‘insignificance strategy’ to sneak in unnoticed. They also have high levels of alkaloids from venom, which they use to bully their hosts into being amiable. 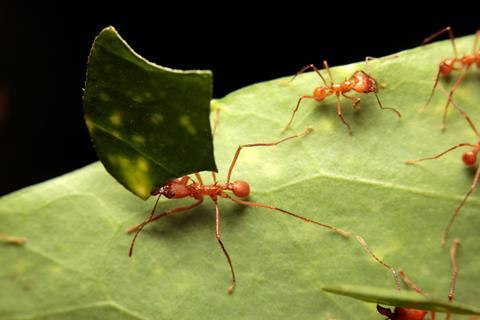 Ted Schulz’s main focus is the planet’s earliest farmers – fungus-growing ants belonging to the tribe Attini. Perhaps the best known of the fungus-farmers are leafcutter ants, seen as an agricultural pest in South America, with a fully grown leafcutter colony consuming as much vegetation as a cow.

The ants harvest fresh plant material to cultivate a fungus that they feed to their larvas. They meticulously clear away leaf waste, while antibiotics and antifungals protect the ants and their gardens. Worker ants tend to the garden and soldier ants defend it.

Biologists and chemists alike study leafcutter ants to understand the chemicals that influence their social behaviour and the role that bacteria play in their ecosystems. Increasingly, researchers are using the ants to hunt for new insecticides and antibiotics.

While some ant species produce antimicrobials from internal glands or harvest ingredients such as tree resin to help fight unwanted bacteria, leafcutters carry protective bacteria called actinobacteria that produce antibiotics. The ants rub their bodies over their precious fungus gardens to spread the antibiotics. (Actinobacteria also produce many of our medical antibiotics, including anthracyclines and tetracyclines.)

In 2018, a team led by Matt Hutchings at the University of East Anglia and Barrie Wilkinson from the John Innes Centre, UK, revealed that Escovopsis produces chemicals that inhibit the growth of the ants’ antibiotic-producing bacteria. Meanwhile, a chemical called shearinine effectively paralyses the workers, preventing them from cleaning out the nests efficiently. The work could pave the way to new insecticides in areas of the world where the ants cause problems.

‘We are trying to find new antibiotics from ant systems,’ says Sarah Worsley, a postgraduate researcher in Matt’s lab. The researchers transfer bacteria from the ants to agar plates. They then see if they prevent growth of a pathogenic strain of bacteria. ‘If we see that the bacteria from ants are slowing growth of nasty bacteria then they are probably producing some sort of compound that has antibiotic or antifungal effects,’ says Sarah. They then try to isolate the active chemical and work out whether it’s novel compared with existing antibiotics. ‘We want to try to find structures that are completely new,’ she says. The researchers think that bacteria evolve with their ant hosts, constantly changing the antibiotics that they produce.

She collected her ant colony from a rainforest in Panama, carrying it home in a carrier bag in her hand luggage. ‘You literally look out for a leafcutter ant and track it back to a little hole in the ground,’ she says. Scraping away the soil reveals the fungus garden, which can be scooped out.

Sarah has kept her ants alive with bramble leaves collected from a lake on the UEA campus. ‘The leafcutter system is amazing,’ she says. ‘Humans have been using antibiotics for about 100 years and it has gone terribly wrong but the ants have been using bacteria for about 50 million years.’ 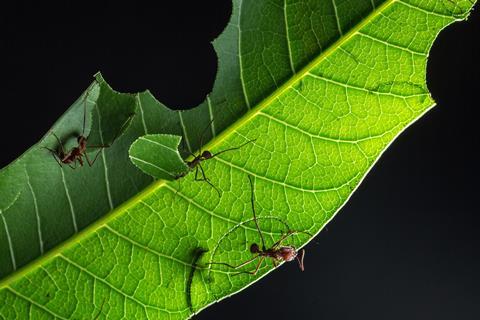 The team has been investigating how the ants selectively attract the beneficial actinobacteria to their exoskeletons. By adding carbon isotopes to the ants’ food and tracing them, the researchers can show that the ants are providing food for the bacteria. ‘We know it’s carbon-based and have a hunch it may be a hydrocarbon,’ she says.

‘The more we learn about the systems, the more useful what we are learning can be for controlling these ants,’ says Ted. ‘This is a really expanding field,’ he says. The number of ant-related antibiotic compounds being identified is increasing exponentially.

At UEA, Matt’s group has isolated hundreds of bacterial strains from different ants. ‘We are slowly working our way through that library,’ says Barrie. ‘We have sequenced the genomes of somewhere between 50 and 100 strains and we have found some have gene clusters that suggest they make some really interesting new types of compounds,’ he says. ‘That’s the next phase.’

Read more about some parasites in this Royal Society of Biology article: bit.ly/2GE0tWg

Explore the researcher’s comment about antibiotic use having ‘gone terribly wrong’ by looking at bacterial resistance on BBC Bitesize: bbc.in/2SjsrYM and in this Education in Chemistry article: rsc.li/2Sg8YIw

Discover how chemists are working to make reactive surfaces counter the growth of resistant bacteria like MRSA: bit.ly/2tAytu5

Ants also produce formic acid, a simple molecule that ties in well with study of acids and alkalis, and can be used safely in the lab. The University of Bristol, Chemistry Department website and CLEAPSS both offer useful information: bit.ly/2ElGQ3a and bit.ly/2Ngi8DW