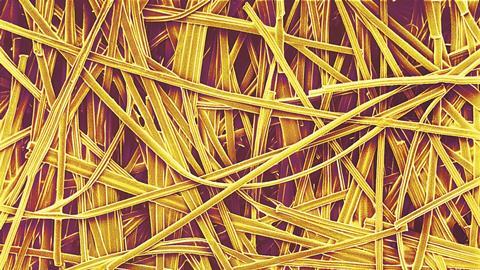 In the digital age of the 21st century, our reliance on paper is rapidly declining. Smartphone or tablet screens and electronic paper displays like those of Amazon's Kindle are becoming the norm for everything from cinema tickets to best-selling books. But our history is written on paper and we face an ever-growing urgency to preserve paper-based artefacts before they are lost forever.

About one third of the paper items in large libraries are too brittle to handle, with another third in need of attention over the coming century. Chemistry is at the heart of paper conservation, but as a science, paper conservation is a relatively new field. As educators we must include paper chemistry and conservation in our curricula to encourage future generations of chemists to take up the challenge.

The principal component of paper is cellulose, which is effectively a polymer of β-D-glucose. Hydrogen bonding between cellulose chains sticks them together to form fibrils, which further associate to form fibres, the basis of the structure of paper (see image). Raw cellulose fibres are extracted from plant sources and suspended in baths of water. Pulling an appropriately sized mesh through the suspension forms a mat of interwoven cellulose fibres as the water drains away. The remaining water is removed through drying and pressing, which bonds the fibres together into a sheet.

Laboratory filter paper consists of almost pure cellulose, but anyone who has ever tried writing on it will know how poor it is for this purpose, and how weak it is when wet. Additives are therefore included to strengthen the interaction between the fibres. Traditional additives include gelatine and aluminium sulfate, which strengthen the paper and prevent ink from running. There are several sources of instructions for paper making as a classroom activity (see Further reading). 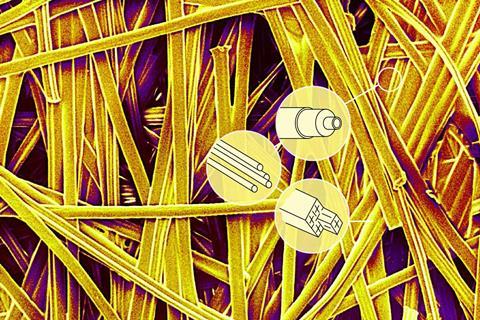 The principal component of paper is cellulose. Hydrogen bonding between cellulose chains sticks them together to form fibrils, which futher associate to form paper fibres

Paper in Europe was originally made from cellulose sourced from linen and cotton rags. This made strong paper structures, owing to the long cellulose chains. The degree of polymerisation - a measure of the average number of glucose molecules in a polymer chain – is high for papers made from linen (3500) and cotton (1000–3000), and this means the chains are tightly bound into the fibrils and fibres by extensive hydrogen bonding.

However, following the invention of the printing press and the enormous surge in demand for paper in the nineteenth century, most paper in our hands today is made from cellulose extracted from wood pulp. Cotton and linen sourced cellulose is now usually reserved for special purposes such as banknotes and artists' materials. While wood is a much more readily available source, the resulting paper has shorter cellulose chains (with a degree of polymerisation around 600–1000) and a weaker structure.

Wood also contains a variety of other carbohydrates and lignin. Lignin is a three-dimensional polymeric material that gives woody plants their physical strength. However, it reduces the strength of paper by interfering with the way the cellulose fibres assemble. For low value paper items, such as newspapers, cheap books and ephemera (material produced for one-off use but now of historical importance), the wood pulps would only be minimally purified to remove lignin. This means they are often the most fragile and rapidly deteriorating materials.

There are two principal chemical degradation pathways of paper: acid-catalysed hydrolysis and oxidation. The pH of 1 g of a piece of paper in 50 cm3 of water gives a measure of its acidity. Early work on paper conservation chemistry found that old paper that was alkaline was much stronger than acidic paper.

Paper can become acidic either by absorbing pollutants such as sulfur dioxide and nitrogen oxides, or during manufacture. Traditionally, aluminium sulfate (or 'papermaker's alum') was added to harden, or 'size', the paper. While this gave initial strength, it was also a source of acidity (see Sources of acidity in paper). Most paper made in the century from 1850 is acidic due to manufacturing additives. 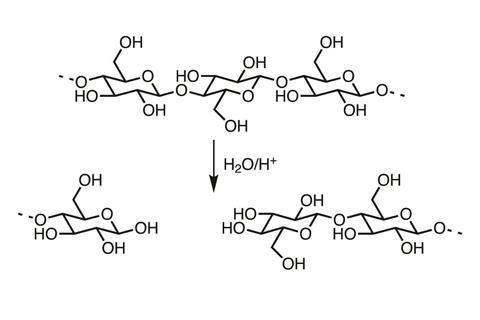 The β-acetal oxygen bridge joining the glucose molecules of cellulose together is susceptible to acid hydrolysis. This breaks the chains and weakens the fibres. Paper that decomposes this way becomes hard and brittle, and disintegrates easily.

Oxidation, usually initiated by light, discolours the paper. Both cellulose (and its derivatives) and lignin within the paper can be oxidised. In cellulose, oxidising the hydroxyl groups to aldehydes, ketones and carboxylic acids lead to discolouration. But it is lignin that is the main cause of photo-yellowing of paper. It contains several chromophores with conjugated aromatic rings and carbonyl groups that absorb in the near UV spectrum (300–400 nm). When these chromophores absorb light they can decompose into yellow-coloured ketones and quinones, turning the paper yellow. Since these molecules themselves absorb visible light, they act as secondary chromophores and can react further, exacerbating the yellowing and degradation processes.

The hydroxyl groups in each cellulose chain result in hydrogen bonding between the chains, which is the basis of the structure of paper

Sources of acidity in paper

Added during the manufacturing process. Dissociates in water to form sulfate ions and hexaaquaaluminium(III) ions [Al(H2O)6]3+ that can undergo acid hydrolysis.

An air pollutant that can both form nitric acid on reacting with the moisture in paper and oxidise the hydroxyl groups on cellulose fibres to carboxylic acids, increasing the acidity of the paper.

A pollutant that can form sulfuric acid on reacting with the moisture in the paper. This reaction can be catalysed by the presence of certain metals (eg manganese) that may have been introduced in the paper making process, probably by oxidation of the dioxide to trioxide.

A component of sweat, lactic acid is a weak acid that can transfer to paper surfaces during handling.

Understanding the degradation pathways reveals preservation methods. From an elementary chemical point of view, if acid is causing decomposition, the solution is to deacidify it. This involves washing paper in a bath of mild alkali such as calcium hydroxide, calcium hydrogen carbonate or magnesium hydrogen carbonate. The benefit is two-fold. Firstly, soaking up water into the cellulose and then drying it re-forms the hydrogen bonds between the fibres, which can restore some of the paper's strength. Secondly, the acid in the paper is neutralised, and reserves of the alkali remain, ready to act against future acidification.

Of course this is a process with which conservators need to take great care. Paper may simply disintegrate, or its contents may be removed when added to water. Fragile materials often need to be mounted on mesh for the alkaline wash. However, despite the risks, this method is the mainstay of the conservation of paper that is degrading due to acid. 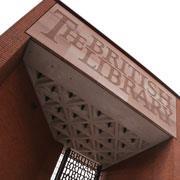 One of the significant challenges to libraries is that they have very large volumes of material. This is especially true for copyright libraries like the British Library, which has over 57 million items. The largest library in the world, the US Library of Congress, has over 150 million items - including a staggering 66 million manuscripts. Alkaline washing is effective, but time-consuming and labour intensive. The challenge in an environment with limited funding is to find ways to deacidify such massive stocks.

The goal of mass deacidification is the same: restore the pH of the paper to a neutral range (6.5–8) and leave an alkaline reserve to act against future acidification. One method examined by the US Library of Congress was using diethylzinc gas to neutralise the acid and leave an alkaline deposit of zinc oxide. While this appeared to be perfect as it involved no solvent and worked well in principle, it was abandoned owing to the pyrophoric nature of diethylzinc and the cost of establishing a plant.

Conservation science is understandably a conservative area that is slow to change, given the nature of the materials involved. One area of current research showing promise is using dispersions of metal hydroxide nanoparticles to neutralise acidity. There are existing commercial products that use microparticles – such as one called Bookkeeper that contains microscopic MgO particles, which form alkaline Mg(OH)2 on application. However, nanoparticles of calcium and magnesium hydroxide can penetrate the paper structure more easily, resulting in more complete deacidification.

While the deacidification washes may also remove some yellowing, more persistent discolouring can be removed by bleaching. The most common reagent is hydrogen peroxide (0.5–3%), since hypochlorites can damage the cellulose fibres. The active bleaching agent is probably the peroxide anion, – OOH, which is formed by dissociation of peroxide in water:

This reaction only produces an appreciable amount of peroxide anion in the pH range of 8–10, and while slow, is considered among the most effective bleaching strategies. 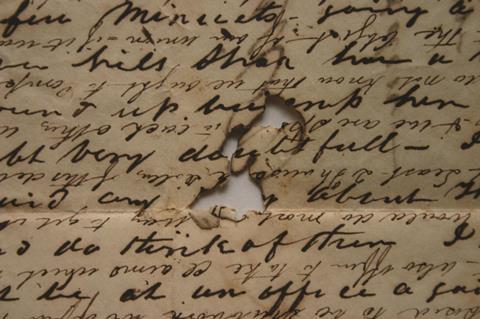 Of course, very little paper is blank, and if it was, it wouldn't be of historic interest. While treating paper, conservators need to consider that inks and pigments themselves can degrade paper. Iron gall ink was popular for several centuries until the mid-nineteenth century, so no one considering paper conservation should ignore its effect on paper structure. This ink was formed by reacting gallic acid (derived from tannins extracted from gall-nuts) with iron(II) sulfate. The presence of excess Fe(II) ions can catalyse the oxidation of cellulose through the production of hydrogen peroxide according to the Fenton mechanism:

This can lead to significant destruction of the paper along the lines of the ink, so much so that the paper can fall out of the structure leaving a lace-like pattern.

This decomposition can be stopped by introducing chelating agents – preferably phytate (inositol hexakisphosphate) – to complex the Fe(II) in the ink. The paper is washed in a solution of calcium phytate, which chelates any iron(ii) present, blocking the Fenton pathway.

A call to arms

The challenge of mass deacidification is still unaddressed, and with institutions such as the British Library committing to conservation research, there is a role and responsibility for chemists of this generation and the next to help find a solution. If any readers of this article would like to join a network involved in developing open access curriculum materials on paper and paper conservation to be hosted on RSC Learn Chemistry, please contact Michael Seery.

Michael Seery is a lecturer in physical chemistry at the Dublin Institute of Technology, Ireland

Acknowledgements: I would like to thank Louise O'Connor at the National Library of Ireland for talking me through the conservation processes used there.