Pictures of the molecular world 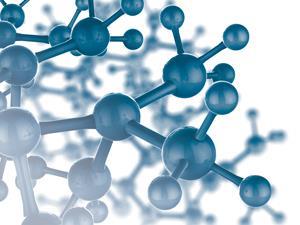 The conventions used to represent chemical structures are so deeply ingrained in the understanding and teaching of chemistry that they form a language every chemist learns to communicate in. However, representation of the structures of chemical compounds is also at the heart of many misconceptions that arise in chemistry teaching and is one reason that it is perceived as a ‘difficult’ subject.

Ever since chemists began to realise that atoms in molecules could be arranged in multiple ways to make different chemical compounds, they have been developing ways to represent these arrangements. Initially, two huge hurdles to describing these structures had to be overcome. The first was that molecules could not be seen. Any representation of their structure was an attempt to model reality in abstract terms. The other, even bigger, challenge was to understand what that reality was – how chemical elements bond together and the possible arrangements they can form.

The representation of chemical structures, like any language, was built up from a gradual understanding of the world it describes, with new conventions being added and inaccurate or unwieldy representations falling out of use.

Getting to grips with the bond

By the mid-19th century the theory of valency was gaining traction – the idea that elements would form a certain number of bonds to other elements, known at the time as ‘combining power’. Chemists began to consider how the ratios of elements in compounds were arranged at the molecular level. 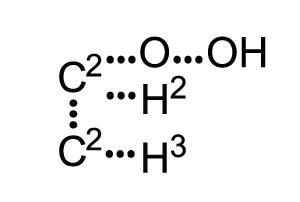 In 1858, Scottish chemist Archibald Scott Couper published the first structural formula representation of a molecule in his paper On a new chemical theory.1

He used elemental symbols to represent atoms with lines placed between them showing bonds. Couper’s structures were very condensed. Multiple atoms were shown with a single symbol accompanied by a superscript numeral – a convention that’s still in use today in a modified form as shorthand for many functional groups.

Scottish chemist Alexander Crum Brown adapted this form of representation in 1861.2 He kept the element symbols, now in circles, and the bonds between them, opting for a much more schematic representation than Couper’s structures.

While these first representations appear crude, they show many of the key features used in skeletal, or line-bond, formulas that form the basis of the representations we use today. Descriptions of molecular structures became a lot less familiar for a few years, before German chemist August Kekulé returned to line-bond conventions in 1865.

While Couper was advancing Brown’s style of representation, Kekulé was developing his own method of notation, colloquially referred to as ‘Kekulé sausages’. He first described his ideas for molecule structures in 1858 using a combination of ovals and circles to represent atoms, differentiating between them by varying the length of the ovals, or by shading the circles.3 The most striking difference between Kekulé sausages and line-bond notation is that there is no specific bond sign, the atoms are simply placed together. Because of this, the system lacked the ability to show the spatial relationship of the atoms in the structure.

Also at this time Josef Loschmidt presented an aesthetically attractive alternative to the line-bond method using interlocking circles.4 Each atom type in this system is shown using either circles of differing size (carbon is large, hydrogen is small) or with concentric circles (oxygen is shown with two concentric circles, nitrogen with three). As with Kekulé’s sausages, Loschmidt’s diagrams had no dedicated single bond sign component. However, these diagrams did include, for the first time, representations of double and triple bonds, shown as two or three lines across interlocking circles.

While Loschmidt’s system was never used among the chemistry community, it is in many ways visually similar to 3D space filling models in use today.

The use of Couper and Brown’s line-bond notation as the most common convention in chemical structure representation was confirmed in 1865 when Kekulé published the first representative structure of benzene. Realising that alternating double bonds in the carbon ring could account for the symmetrical properties of benzene if the structure was free to ‘resonate’ between two configurations, Kekulé proposed the structure of benzene using line-bond structures that are easily recognisable within modern conventions. This discovery was such a leap in understanding that still today line-bond structures are commonly referred to as Kekulé structures.

Even though depiction of chemical structure had become standardised, the nature of a chemical bond was not well understood until American chemist Gilbert Lewis proposed that covalent bonds were formed by the interaction to two shared electrons. Along with this concept, which underpins valence bond theory, Lewis introduced a representation of molecules that dispensed with the depiction of bonds by lines.5

In Lewis dot structures, atoms are shown surrounded by dots that indicate their valence electrons. Bonds between atoms are represented by the pairs of electrons that comprise them (four and six electrons in the case of double and triple bonds). While the depiction of bonds in this way did not replace the use of lines, Lewis’ dots are still used in modern representations to indicate lone pairs of electrons or free radicals.

Line-bond skeletal formulas clearly showed the bonds between atoms, but gave little indication of the 3D structure of the molecule. As chemists wrestled with valency and the nature of chemical bonds, representation of molecules remained firmly in 2D. But this was soon to change.

Accounting for the observation of optical activity in many organic molecules, Jacobus Henricus van’t Hoff proposed in 1874 that saturated carbon atoms adopted a tetrahedral geometry. At the time, the four bonds of carbon were assumed to lie in a plane. With all its implications for stereochemistry, Van’t Hoff’s theory was revolutionary.

Suddenly, chemists found that their 2D representations were no longer sufficient to describe molecules in 3D. As a result, several new representations built upon the line-bond convention so this stereochemical information could be included (see 3D vision). 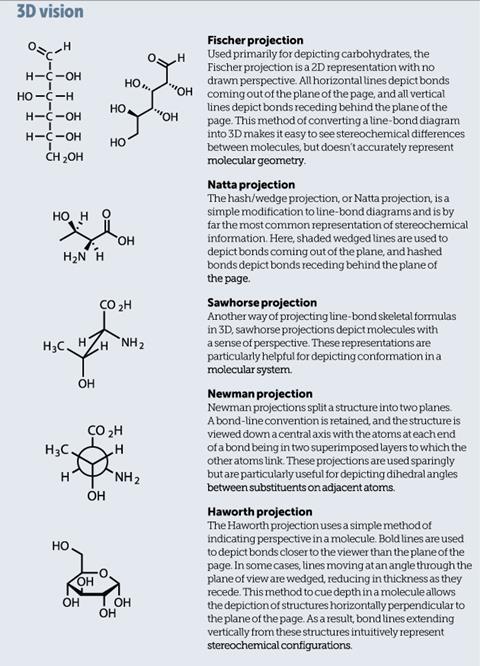 The insights of Kekulé and Van’t Hoff into the nature of bonding and structure were conceptual leaps, but confirmation of their theories did not come for some time.

With the advent of x-ray diffraction techniques in 1914 chemists, for the first time, could see how the atoms in molecules were arranged in space. William Henry Bragg was the first to study the crystals of organic molecules. In 1921 he published a study on the structure of naphthalene and its derivatives.6

Finally, with the development of valence bond theory in 1929 and the solution of the Schrödinger equation for atoms, at last chemists’ insights into the structure of molecules had a firm basis in quantum mechanics.

Following on from this, chemists were able to develop models of molecules that more accurately depicted their structure. Space-filling models were developed where atoms are represented by spheres, the radius of which is proportional to the atomic radius. Bonding in these models is represented by overlapping of the spheres. Again, the distance between the centre of the spheres is proportional to the bond length between the atoms.

Today, we display and draw chemical structures using various different conventions. Although all of them are based on the principles of the line-bond structure, their diversity allows chemists to describe and highlight different aspects of a molecule’s character. Indeed, many complex structures are commonly displayed using multiple conventions for differing parts of the molecule (see quinine below).

With widely used conventions that haven’t changed significantly for many years, it’s easy to think the way we currently represent the structure of molecules is here to stay. But our conventions still have limitations in their descriptions. For example, there are many so-called non-Kekulé molecules whose structure cannot be easily described with line-bond conventions, or indeed molecules with axial chirality for which no satisfactory convention has yet been established. So, as stable as conventions have been, our chemical language might yet undergo some changes.

Matthew Lickiss is a PhD student at the department of typography & graphic communication, University of Reading, UK