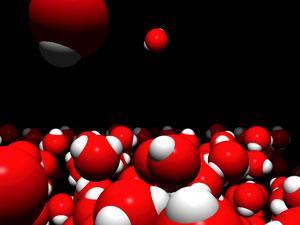 To those with little experience of the area, chemistry can be extremely daunting. Science has a reputation for being difficult to learn, and chemistry particularly so. Alex Johnstone offered an elegant explanation for this in his seminal paper on the subject.1 He proposed that an expert in chemistry moves continuously between three distinct levels of thinking: the observable (macro) level, the molecular (sub-micro) level and the symbolic (representational) level.

At the observable level, the chemist sees, touches or senses in some other way the chemical change. At the molecular level, they use dynamic, imaginary mental images to explain observations in terms of structures and processes involving atoms, ions and – of course – molecules. Lastly, they describe, at the symbolic level, observed phenomena and molecularlevel structures and processes using chemical notation and mathematics. Considered this way, it is little wonder learners struggle.

The three thinking levels for the chemical reaction that occurs between silver nitrate solution and solid copper are shown in Figure 1. At the observable level, you can see dendritic silver crystals growing on the surface of the copper. At the molecular level, an animation can portray the dynamic, but imperceptible, formation of silver atoms as a growing crystal. Lastly, the equation summarises the reaction at the symbolic level. 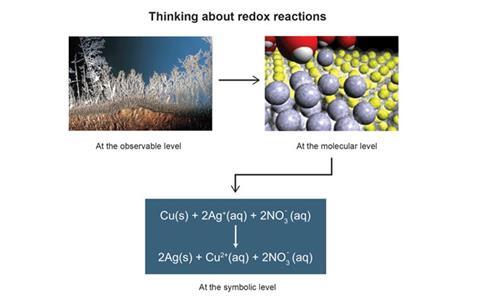 Figure 1: Redox reaction between Cu(s) and Ag+(aq) at the three thinking levels

I first used this idea explicitly in the late 1980s by allocating different parts of the lecture stage to different levels.2 I showed the reaction at the observable level on one side and showed the processes occurring at the molecular level on the other using models. Only after I had presented both these perspectives did I describe the phenomena depicted at the symbolic level on the board. I used this three-level approach consistently in the laboratory manual, study activities and exam questions in order to encourage students to integrate laboratory work and theory.

Johnstone suggests that much of the difficulty associated with learning science occurs because ‘so much of teaching takes place … where the three levels interact in varying proportions and the teacher may be unaware of the demands being made on the pupils’.3 Many students cannot see the relationships between the levels and as such find it difficult to move their thinking between them. Being able to see those relationships is not a necessary condition of academic success.4 But, as Dorothy Gabel points out, when students do not, their knowledge may be fragmented5 and understanding superficial.

Gabel also suggests that problems arise because chemistry teaching traditionally concentrates on the abstract, symbolic level and teachers do not often consider the three levels in their own thinking. Most probably they do not even realise they are routinely moving from one to another. This is not to say straightforwardly presenting the three levels simultaneously is always best – this is likely to overload the working memory of a novice.3,5 If the levels are introduced together, numerous opportunities should be given to relate them, so that linkages are formed in the long-term memory.

There is convincing evidence in the literature that many chemistry misconceptions held by students result from inadequate or inaccurate molecular level models. Mary Nakhleh defined the term ‘misconception’ as ‘any concept that differs from the commonly-accepted scientific understanding of the term’.6 Such misconceptions are often extraordinarily resistant to change, and common to students all over the world, learning at different educational levels. The problem is exacerbated by some students being able to reliably solve traditional-style chemistry problems despite not understanding the underlying molecular processes.7,8

Until the early 1990s, there was a shortage of resources that portrayed the dynamic, molecular level, so teaching and learning was restricted to the observable and symbolic levels, with the hope that students would develop accurate mental models. As resources, students had only the static, greatly oversimplified, 2D diagrams in textbooks and their own imaginative interpretations of the chemical notation. 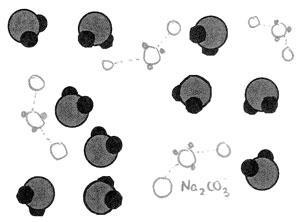 Both could be extremely misleading. Solid sodium chloride, for example, does not have directional bonds or significant spaces between ions, as might be suggested by physical models. Additionally, models of the lattice structure of ice may not make clear the distinction between inter- and intra-molecular bonds if both are shown with sticks. My personal recommendation is to only use ball and stick models to portray single molecules. Meanwhile, over-interpretation of the notation might lead a student to erroneously assume that sodium carbonate solution, written as ‘Na2CO3(aq)’, is solvated Na2CO3 molecules (see Figure 2).

To their credit, physical models provide a tactile, kinaesthetic appreciation of shape and angles. This can make them more convincing than 2D representations (perspective or orthogonal) of 3D models on a computer screen, particularly for those without any previous experience with physical models. This can be likened to a failure to navigate efficiently in virtual gaming environments because of insufficient physical experience of the real world.

However, given the molecular world is inherently dynamic, it would be reasonable to assume that computer animations would be more effective.

We established the VisChem project9 in the early 1990s with the aim of producing a suite of molecular animations that would address student misconceptions identified in the literature.10

Table 1 shows an example of how VisChem animations specifically target chemistry misconceptions from the educational literature. VisChem animations are novel in that they portray the vibrational movement in solid substances. The degree of movement correlates with temperature, and students need to understand this correlation to see the significance of melting and boiling points at the molecular level. 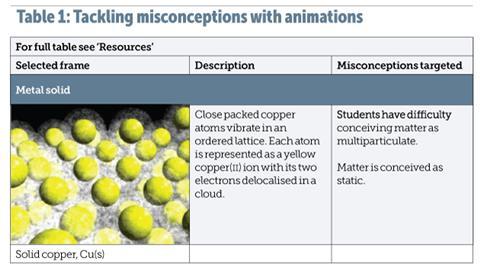 Many textbook diagrams depicting particles in the solid, liquid and gaseous states are misleading because the relative spacing between particles is inaccurate. The VisChem animations are more accurate in this respect. 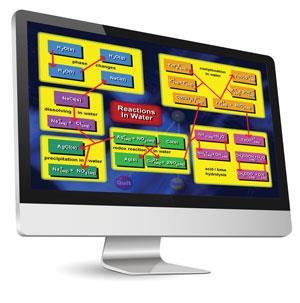 Figure 3: VisChem animations are available for all the substances, solutions and physical and chemical changes shown

Additionally, few students have a ‘feel’ for the average distance between ions in a solution of a given concentration in the way that people have a feel for a length of one metre. VisChem animations portray ionic solutions at a concentration of about 1 mol dm-3, with ions separated from each other by, on average, about three water molecules (see table in Resources). This brings meaning to the magnitude of the number expressing molarity. Students are encouraged to imagine dilution in terms of separation of ions by more water molecules.

The VisChem animations are freely available online for non-commercial purposes.9 Additionally, they have been incorporated into online learning resources associated with university-level chemistry textbooks.11

The animations portray substances: some in different states of matter, some undergoing physical changes and some involved in common chemical reactions, as summarised in Figure 3. All the building blocks - individual atoms, molecules, ions, and hydrated ions - are available as separate graphics or animations for use as 'symbol legends'.

We have been exploring the use of VisChem animations in teaching for over 20 years and found the most effective way to use molecular visualisation to promote deep understanding of chemistry concepts is through an explicit learning design. (A YouTube demonstration of the VisChem learning design is available on the website.9) This should be informed by an audio-visual information processing model.12,15 Additionally, animations should be used in a sustained manner, so students gradually enrich their mental model of the molecular world over the whole chemistry course.

In designing the animations, we faced the challenge of balancing the often-competing demands of scientific accuracy, artistic license and technical constraints. For example, the extremely short distances between adjacent molecules in the liquid state, complicated internal molecular bond vibrations and the diffuse nature of electron clouds are all hard to portray. Meanwhile, for the sake of clear communication, we:

Animations of the molecular world can stimulate the imagination, bringing a new dimension to learning chemistry. One can imagine being inside a bubble of boiling water or at the surface of silver chloride as it precipitates, as depicted in Figures 4 and 5.

Most molecular-level processes involve competition between conflicting processes. Peter Atkins says this is one of the ‘big ideas’ that we should communicate to students.13 VisChem animations portray this competition in the struggle for a proton between a base, like an ammonia molecule, and a water molecule (see Figure 6) and in the lattice forces and ion-dipole interactions present when sodium chloride dissolves in water (see Figure 7).

Unfortunately, like all molecular-level animations, VisChem animations can generate some misconceptions. One of the most serious is that processes are governed by some kind of directed intent, instead of probabilistic behaviour derived from thermodynamics and kinetics.

We discovered this flaw in one particular animation during interviews with students. One perceptive student thoughtfully drew this to our attention in the animation portraying silver chloride precipitation (see Figure 5). 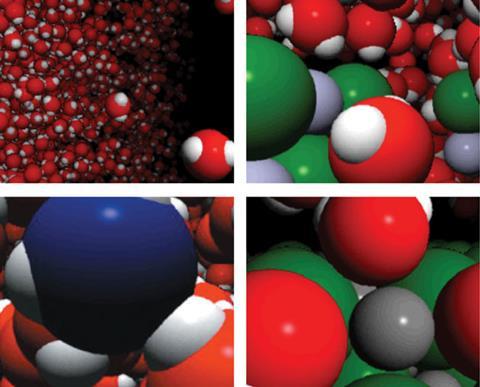 ‘This animation … shows water molecules … sort of carrying this structure [the AgCl ion pair] along … like a bunch of little robots … The animation depicts something that … I think it really happens by chance, as a very deliberate sort of process, and I think that’s slightly misleading … Surely it must be possible to make it look less deliberate, less mechanical, maybe by showing … the odd one or two going into the structure but not all of them.’

In general, unsuccessful encounters are omitted because of the previously mentioned technical constraints. However, this means we must explicitly point out the compromise that has been made: it is not unlike the use of a chemical equation to summarise a reaction, rather than listing all the elementary steps in the reaction mechanism.

Theory-driven simulations, such as those in Odyssey by Wavefunction, offer a more accurate depiction than choreographed animations. However, they often do not show key features of molecular events clearly because they occur only rarely, at random and usually with intervening solvent molecules blocking the view. Clearly, simulations and animations should be used to complement one another.

Finally, we have found that if visualisation as a learning strategy is to be taken seriously by students, they must apply their mental models in new situations and test them in formal assessments. In addition to questions that probe qualitative and quantitative understanding of concepts at the symbolic level, we need to design questions that require students to communicate their mental models of molecular-level structures and processes using drawings and words.

Moving readily between Johnstone’s three ‘thinking levels’ is a challenge, particularly for the novice. Our work on the VisChem project indicates that animations and simulations can effectively communicate key features of chemistry at the molecular level. Furthermore, the mental models generated as a result can link the observable level to the symbolic level.

New misconceptions can be generated, so to use animations effectively, teachers should direct students’ attention to the most important aspects, avoid overloading working memory and promote meaningful integration with prior knowledge. They can do this by using constructivist learning designs that exploit our knowledge of how students learn.

‘Scarring’ misconceptions are those that inhibit further conceptual growth. To identify these misconceptions, chemistry teachers should use a strategic approach to help students visualise the molecular level, to encourage students to communicate their mental models through drawing as well as writing and to assess their deep understanding of structures and processes.

Roy Tasker is professor of chemistry education at the University of Western Sydney, Australia