In 2014 a small team from the UK will dispatch a car to Africa with the aim of it speeding across the desert at 1000 mph. We find out how chemistry powers the car to success 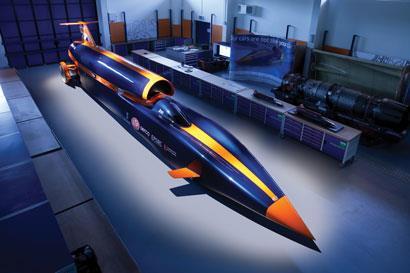 In an unassuming, square brick warehouse, a team are building a car which will travel at 1000 miles per hour. Called Bloodhound, this 13 metre long machine is the brainchild of Richard Noble, a man who knows what it's like to be the world's fastest man, having driven Thrust 2 at a speed of 633 mph (not quite the speed of sound) in 1983. But it seems that it's not (just) a desire for insane speed that drives him.

Noble's goal with the Bloodhound project is to inspire a new generation of scientists and engineers. He was inspired by the Apollo effect - during the space race of the 1960s the excitement hugely increased the number of young people wanting to study science. 'You can't excite people with electric cars and wind turbines' says Noble. A 1000 mph car might just do it though.

There is also a serious side to the mission. 'What is the single biggest threat facing us today?' Noble asks in a recent video on the project's online TV channel. In short, Noble thinks challenges like cutting emissions and supplying food to a growing population demand bold ideas from scientists and engineers - and at the moment there aren't enough of them to try.

Bloodhound is a daring and imaginative project from whatever angle you care to come at it. This is the mother of all research projects; there are lots of scientific problems the team need to solve.

At 1000 mph Bloodhound's wheels will spin at about 170 times a second, and generate a stress of about 50k times the force of gravity (g) at the rim. Although some older land speed cars have used inflated tyres, for Bloodhound the stresses involved mean only a solid wheel can cope.

However, a solid wheel largely determines the surface the car will run on. Land speed records are often attempted on salt pans, which are very flat and very hard. This gives good grip but little friction, and is ideal for high speeds. Since Bloodhound will use solid wheels, a salt pan could be dangerous. With no give in the wheels at all, any tiny irregularities in the surface could cause a big bump. It was this factor which prompted the team to choose the softer desert surface of the Hakskeen Pan in South Africa. This is essentially hard-baked mud, and will allow the wheels some lateral grip.

The desert surface of the Hakskeen Pan, South Africa where Bloodhound will reach speeds of over 1000 mph

The final choice for the wheel material was aluminium. Aluminium is extremely light (2.7 g cm-3) and strong, but slightly softer than rival material titanium, which is prohibitively expensive.

Sections of Bloodhound's shell are made from different materials, carefully designed to fulfil different roles. The most important part is the carbon fibre shell that forms Bloodhound's nose and protects the pilot.

Carbon fibres are made from thin sheets of graphite woven into a strong polymer to create a filament. They are extremely strong (see table) in tension along their axes (because of the strong carbon-carbon bonds) but, the layers of graphite - like those in a pencil - are only held together by weak intermolecular forces. The strength of the material is therefore highly anisotropic - that is, not the same in all directions. The challenge for the engineering team is to work out how to weave carbon fibres into composites so that the directional strength of the carbon-carbon bonds is best exploited. 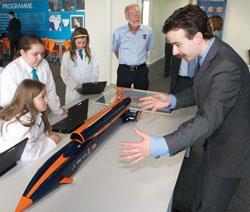 Daniel Jubb, rocket engineer (has a moustache most men would kill for and a job title to match) demonstrates to eager onlookers

Another interesting challenge the team faced was how to power the car. In the end they have opted for two power sources; a Eurofighter Typhoon jet engine, which will power the car up to a speed of about 350 mph, and then a rocket - the largest ever built in the UK.

The project's rocket engineer is Daniel Jubb. Despite Bloodhound's educational overtones he is not the most traditional advert for school - he left at 13 to be home schooled and start a rocket engineering firm with his grandfather.

Like many boys the young Jubb had a passion for pyrotechnics, but - rather exceptionally - he had managed to launch over 100 rockets by the age of 10. 'My grandfather and I would drive out to the test site with several different [rocket] configurations that we'd come up with ready to go,' Jubb tells me, 'we'd fly several of them to try and get some performance data points. The way we had more fun was to build a faster and better rocket and the way we got there was to use a scientific approach.'

2000 (Exact date not disclosed). Americans begin work on a rival landspeed record attempt project; the North American Eagle which aims to reach a speed of 808 mph and wrestle the title from the British. Spookily, the NASA-starfighter from which the craft is built has the tail number 763, which is the current land speed record in mph!

2007 American adventurer Steve Fossett disappears whilst in the final stages of preparing an assault on the record with his car Sonic Arrow. The car is currently up for sale and there are rumours of an unknown buyer. Fossett is believed to have been killed in a plane crash.

October 2008 The Bloodhound project gets the go ahead from science minister Lord Drayson who says 'there is every possibility that the Bloodhound team will reach the absolute speed limit for a car on wheels.'

The chemistry of rockets 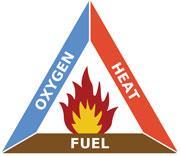 Jubb and the Bloodhound project had to consider several different options before eventually achieving the right balance for the car's rocket. There were some quite exacting requirements; it had to be quite short burning, but reach maximum thrust (for maximum acceleration) as quickly as possible. An 'off switch' was essential because the pilot, Wing Commander Andy Green, places great value on being able to stop the car if anything goes wrong. And, of course, it had to be as safe as possible.

A rocket is essentially a combustion reaction in a tube, so it requires three things: heat, oxygen and a fuel. A rocket is an enclosed space, so it must use an oxidant - in this case a compound that reacts to give off O2 - to provide the gas consistently during the firing.

The first decision to be made was about the physical state of the fuel and oxidiser. Most rockets use liquid fuels. The space shuttle rockets, for example, used liquid oxygen (the oxidiser) and liquid hydrogen (the fuel). Bloodhound chose a different route - a hybrid rocket, using solid fuel rods made from a synthetic rubber and a liquid oxidant.

'Initially we thought that nitrous oxide [(N2 O) or laughing gas] might be the way to go for the oxidant' explains Jubb. 'We also considered nitrous acid (HNO2) and looked at the classic combination of kerosene and liquid oxygen. But eventually we decided upon HTP.'

HTP (High Test Peroxide) is an 86% solution of hydrogen peroxide (H2 O2) in water, and Bloodhound will carry 963 kg of the stuff. HTP gives off oxygen in the following decomposition reaction:

Because the reaction is so exothermic, the water produced is immediately converted into steam which expands quickly and is forced through an aperture, producing thrust. Initially the HTP is just allowed to trickle over a silver bead catalyst pack, which helps initiate the decomposition reaction. In phase two, the flow of HTP is increased.

To generate the level of power that Bloodhound needs (about 122 kN of thrust), it must be very fast, so engineers have installed an engine from a Formula 1 car to pump it across the catalyst pack. This raises the temperature to 600°C which is enough to ignite the rocket. This technique keeps Andy Green happy because, if he does feel the need to abort the run, he can switch off the HTP pump and the rocket will quickly run out of oxidiser.

The strength of H2O2 as a fuel is also its downside: the decomposition is so favourable that H2O2 is dangerous. The reaction is entropically favoured (ΔS° = 70 J mol-1 K-1) and enthalpically favoured (ΔH° = -98 kJ mol-1) as the bonds formed release more energy than is required to break the H2O2 bonds.

Consequently, the reaction is thermodynamically spontaneous - it takes almost nothing to get it going. That means the aluminium tanks which store the HTP have to be 'passified' to remove any nucleation points which could set the HTP going ('chromium ions from stainless steel components are a particular worry' says Jubb). The passification involves a rigorous regime of ultrasonic cleaning, immersion in concentrated nitric acid and then careful testing with increasing concentrations of H2O2. 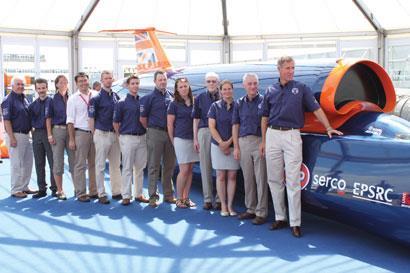 Chemistry is central to the rocket powering Bloodhound, but Jubb has called on other areas of science to fully understand how the rocket works, such as the dynamics of the superheated gases. The project team had to understand the kinetics of the reaction to work out how fast the rocket will burn. They designed an entirely new computer program to simulate this, which could prove useful for rocket design in other applications.

Bloodhound's influence could reach far beyond itself, into education, engineering and through the scientists it inspires, to all the unimaginable inventions and innovations they will create. Bloodhound aims to break the 800 mph record in 2013 and reach 1000 mph in 2014, but for the long lasting benefits of the project, we may have to wait a little longer.

Josh Howgego is a chemistry PhD student and writer based in Bristol. 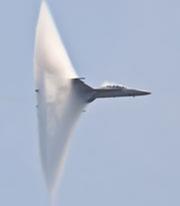 The speed of sound

Intriguingly the speed of sound is dependent on air temperature. Sound is essentially vibrational waves in matter (in this case the air). If the air is cooler it has less energy and the particles (oxygen and nitrogen molecules mostly) move less quickly. This means at cooler temperatures sound travels more slowly through the air.

This is why land speed record teams sneakily try their runs early in the morning when the air is cool. The lower the temperature the better: at 15°C the speed of sound is 761.2 mph. At 25°C it's a little higher: 768 mph. Although of course this doesn't change the absolute speed of the car, it does alter the Mach number (M), which is defined for a given temperature as: 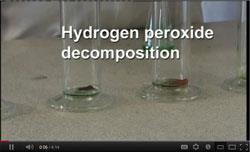 Why not use the Bloodhound story as an introduction to teaching catalysis? As the article describes, the car uses the catalytic decomposition of H2O2 as an important source of thrust. This classroom experiment gives a very visual demonstration of the relative properties of some potential catalysts for decomposing H2O2. Several measuring cylinders are set up each containing a little washing up liquid and a small amount of a catalyst.

Download the instructions from Learn Chemistry or watch the demonstration on YouTube. A worksheet and teacher notes are available. 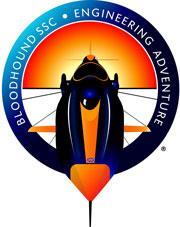 The vision for the Bloodhound project is to inspire a new generation of students to become scientists and engineers. To help achieve this aim, the project is supported by a website full of free information and resources.

Become involved with the project by filling in your details on the Bloodhound website.This will give you access to a huge range of teaching materials and full open access to the design, build, test and record breaking attempts of Bloodhound.

There is much more on the Bloodhound website which will be of interest and help to engage students with science and engineering.

Bloodhound facts
Facts about the car

Projects you can be involved with
Opportunities to engage

Catalysts for the decomposition of hydrogen peroxide
Instructions for teacher demonstration