The discovery of fluorine 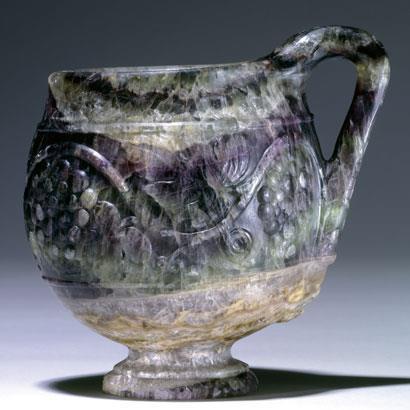 Source: The Trustees of the British Museum

In the 1500s, Georgius Agricola, a German mineralogist, described a crystalline material that helped some ores melt at lower temperatures. He called it fluores, from the Latin fleure, meaning 'to flow'. Today we know it as fluorspar, fluorite, calcium fluoride or CaF2. It was found to have a remarkable property.

In 1670, Heinrich Schwanhard, a German glass worker, observed that the lenses of his spectacles became clouded when he treated fluorspar with strong acids. He is reputed to have exploited this process to etch designs into glass. If this is true, it would be the first commercial application of hydrofluoric acid. HF can dissolve glass because it reacts with SiO2:

The tragic history of fluorine 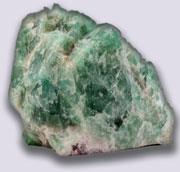 The precursor to elemental fluorine is anhydrous hydrogen fluoride, boiling point 19oC. Both the liquid and vapour are poisonous, with the liquid form causing deep burns.

Paul Louyet and Jerome Nickles died during their investigations, presumably due to the effects of inhaling HF.

Later, in 1771, Carl Wilhelm Scheele revisited Schwanhard's work and found that the inner surface of a glass retort became corroded. He concluded, with the insight that makes him one of the giants of 18th century chemistry, that fluorspar contained a 'specific acid', that is, an acid with a unique property. He named it fluoric acid (now known as hydrofluoric acid).

The composition of hydrofluoric acid was a topic of debate until around 1810 when André-Marie Ampère suggested that it had a marked similarity to hydrochloric acid. Moreover, by analogy with calcium chloride, Ampère also suggested that fluorspar consisted of fluorine and calcium. 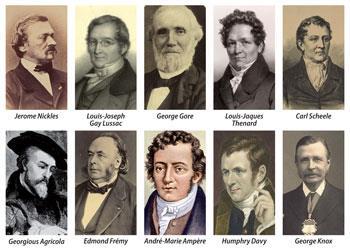 The role of Davy

Sir Humphry Davy was arguably Britain's leading chemist of the early 19th century. He was particularly noted for applying electrolysis to break down compounds into their component forms and in this way isolated, for the first time, samples of sodium, potassium and other reactive elements.

Davy embarked on a range of experiments in order to test Ampère's theory. His initial experiments demonstrated the probable existence of fluorine as an analogue of chlorine and he proceeded with further experiments, in an attempt to obtain what he described as the 'insulated state' of this element. 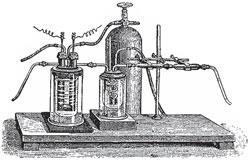 He found that chlorine would decompose the fluorides of mercury and silver in glass vessels. He obtained HgCl2 from the fluoride of mercury and AgCl from the fluoride of silver. He repeated the experiments in a vessel of platinum coated with potassium fluoride. Traces of a gas were obtained, which had an odour more 'disagreeable' than that of chlorine, and the platinum was found to be corroded. This gas may have been the first appearance of elemental fluorine.

Davy also experimented with hydrogen fluoride, which he prepared by distilling fluorspar with concentrated sulfuric acid. As HCl is a convenient source of chlorine, he thought that hydrofluoric acid might ultimately yield this mystery element for which he proposed the name fluorine. 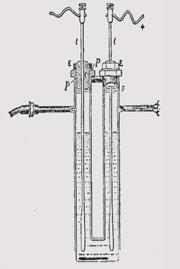 After electrolysing the hydrofluoric acid, Davy found some gas had been produced at the cathode which, by its combustibility, was inferred to be hydrogen. However, the platinum wire on the opposite side of the battery was rapidly corroded and became covered with a 'chocolate coloured powder'. Davy explained this in terms of the hydrofluoric acid being split into its elements. He postulated that fluorine had entered into combination with the platinum wire.

However, he did not succeed in isolating fluorine.

Davy's work, together with that of other chemists, led to the presumption in the first half of the 19th century that a new element was awaiting discovery, but that its reactivity would make its actual isolation very difficult.

In 1836 the Irish Knox brothers, Thomas and George, decided to search for the elusive fluorine. They noted that Davy had used vessels made from fluorspar, presumably considering that this material was inert towards fluorine's reactivity. The Knox brothers heated the fluorides of mercury and the hydrofluate of ammonia in small vessels of fluorspar, which contained HgCl2. In the first vessel, HgCl2 formed, and, in the second vessel, they found gaseous HF.

They then proceeded to use larger fluorspar vessels, equipped with external electrical heating, to generate the element in amounts sufficient to investigate its properties. Mindful of fluorine's perceived reactivity, they used receivers with stoppers, both also made from fluorspar. On moving the receivers over the mouth of the generating vessel, the stoppers fell in, exposing the receivers to the contents of the vessel. Various substances were subjected to the action of the gas formed. Litmus turned red, glass was attacked, gold was slightly affected and on one occasion appeared to have formed gold fluoride.

Sometimes, during these experiments with HgF2 and adapted vessels, they managed to obtain a colourless gas which had a

"heavy smell, not pungent or irritating, and thereby easily distinguishable from chlorine or fluoric acid"

and a corrosive sublimate ie HgCl2. Their observation of a colourless gas does not fit with the known observation that fluorine is a pale-greenish-yellow coloured gas. However, in the trace amounts encountered in this experiment, it might well have appeared colourless. The author, Edward Turner, in his 1846 book Elements of chemistry reports somewhat confusingly that

"Messrs. Knox ... succeeded so far in the preparation of fluorine as to leave no doubt of its existence as a coloured gas." 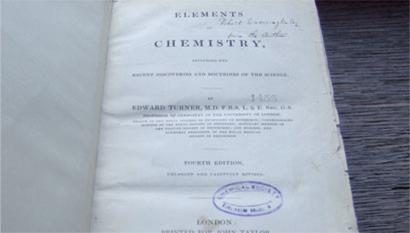 Title page of Elements of chemistry by Edward Turner

The Knox brothers attempted to confirm the presence of the new element by letting it mix with hydrogen. The application of a spark resulted in an instantaneous detonation with the formation of slight fumes. They inferred this as possible evidence for the formation of HF. They also noted that, if the receivers containing the gas were placed over water, then the water obtained all the properties of hydrofluoric acid. It reddened litmus, acted on glass and formed precipitates with solutions of soluble salts of calcium and barium (both CaF2 and BaF2 are insoluble in water).

In 1855 Edmond Frémy turned to Davy's electrolytic method, this time using anhydrous molten calcium fluoride. Metallic calcium was produced at the cathode and a gas, which must have been fluorine, escaped at the anode. However, he failed in his attempts to collect and identify it. He abandoned this field of experimentation.

George Gore then re-visited this electrolytic method in 1869. He understood the need to employ perfectly anhydrous liquid hydrogen fluoride and was well aware of the dangers inherent in its use.

"the acid thus obtained is a highly dangerous substance, and requires the most extreme care in its manipulation."

Numerous attempts were made using charcoal and other elemental anodes. However, in the case of the charcoal anodes, even in the absence of a current, the rods cracked and flew into pieces. Switching the current on caused the rods to break-up immediately and, in some instances

"with dangerous violence, projecting fragments to a considerable distance."

Gore had, presumably, managed to liberate a little fluorine, which then combined explosively with other components of the reaction. However, Gore stated that the liberated gas could have been oxygen, which had been absorbed by the wood and then released.

There were two problems that Gore failed to resolve. Firstly, liquid HF is essentially a non-conductor of electricity, and the more rigorously that water was excluded, then the less conducting it became. Secondly, Gore and his predecessors were thwarted by the extreme reactivity of any liberated fluorine. Even the least reactive of metals, electrodes of gold and platinum, were attacked. The few substances that may have been inert to gaseous fluorine, such as fluorspar, were insulators and would not serve as electrodes.

Moissan's isolation and identification of fluorine

The credit for isolating fluorine usually goes to Ferdinand Frederic Henri Moissan, who was formerly Frémy's student at the Musée d'Histoire Naturelle. In continuing the work on the production of this element, he needed a test to show if he had been successful. He decided to use finely powdered silicon. If it underwent instantaneous reaction, it had probably been exposed to elemental fluorine. Moreover, the product could later be analysed and confirmed to be SiF4. 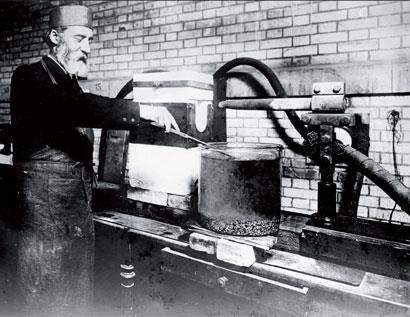 Henri Moissan working in his laboratory

After a search for a likely electrolyte, he finally used a solution of Frémy's dry potassium acid fluoride, KHF2, by dissolving perfectly dry potassium fluoride in anhydrous hydrofluoric acid. This proved to be a good conductor of electricity. However, he had to overcome the extreme reactivity of fluorine with platinum. Fortunately, he found that an alloy of platinum and iridium was reasonably inert to attack by fluorine.

His actual apparatus consisted of two electrodes of this alloy sealed in a platinum U-tube, closed with fluorspar screw caps and covered with a layer of gum lac (shellac) in order to prevent the ingress of moisture. The U-tube was cooled to -23o C using liquid methyl chloride, maintaining the HF in the liquid state, even during the passage of the current. Later experiments showed that the platinum U-tube could be replaced by one made from copper. In the presence of HF, the metal becomes coated with a firmly-adherent layer of CuF2 which prevented further attack by the acid.

Moissan finally succeeded in his quest to isolate fluorine on 26 June 1886, when he observed the formation of a gas at the anode, which burst into flames when tested with silicon. However, it took two attempts to demonstrate his isolation to a committee comprising of Frémy and a number of other distinguished chemists. Frémy then generously commented:

"A professor is always happy when he sees one of his students proceed farther and higher than himself."

Moissan was awarded the Nobel prize for chemistry in 1906:

"in recognition of the great services rendered by him in his investigation and isolation of the element fluorine. The whole world has admired the great experimental skill with which you have studied that savage beast among the elements."

Sadly, he did not live long to enjoy the rewards, both financial and acclamatory that went with his prize. The award was made in Stockholm on 10 December. Moissan returned to Paris and almost immediately contracted appendicitis. A serious disease at that time, he died on 20 February 1907, aged only 55.

Richard Toon is enterprise business manager at Keele University and greatfully acknowledges the help given by Alan Dronsfield.

This article was originally published in print under the title 'Fluorine, an obsession with a tragic past'.