The language of chemistry 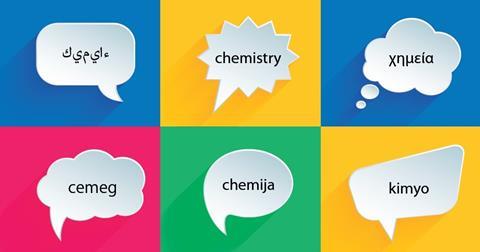 While chemistry is often referred to as having its own unique language, studying our subject in a language other than your mother tongue is undisputedly more difficult than for native English speakers. Differentiation is therefore recommended when teaching students for whom English is an additional language (EAL), but ideally without increasing your workload. Luckily, many strategies that benefit EAL students are also invaluable for their classmates. This article considers some chemistry specific strategies to engage and support all students, including those accessing content in an additional language.

Language acquisition has been a key focus of my career. I taught English as a foreign language for five years and have spent the last two years teaching chemistry exclusively to EAL students. Students show a diverse range of linguistic strengths and weaknesses, so I can vouch for the idea that a one size fits all EAL approach is misguided.

In my class, exploratory chat and discussions involving the generation and testing of hypotheses are often dominated by the more fluent speakers. This is why I disagree with the frequently suggested idea that students should only speak the target language during lessons. Jim Cummins, a leading researcher of bilingual teaching at the University of Toronto, Canada, has found that ability in the first language predicts ability in the second. As such, he recommends EAL students are encouraged to access relevant material in both their first and second languages. Having done so, there is no reason to forbid exploratory chat in their native language if there is another student in the lesson who speaks it. 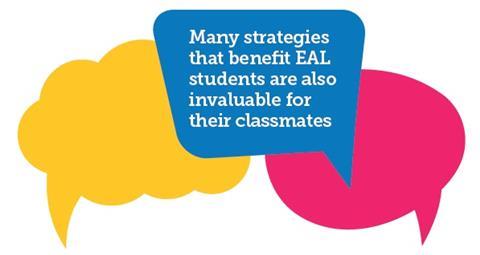 Comparison is highly accessible and yet invaluable to all students. In Chemical misconceptions: prevention, diagnosis and cure, Keith Taber suggests that chemistry learning occurs when students appreciate relevant differences between diagrams. This is not just ticking the box for Bloom’s taxonomy, it is rapid planning for widely accessible learning.

For example, show the class diagrams of ethane and ethene. Ask students to discuss in pairs the similarities and differences, then feed back to the class. Even the least confident students will have something to say, such as both diagrams contain the letters C and H. Follow up with a question: ‘does anyone know a word for that?’ Hopefully they’ll answer: ‘yes, hydrocarbons’.

Students naturally challenge themselves. They tend to form the highest level contribution they can and even in this simple case, the possibilities are endless: ranging from the constituent elements to the type of bonding orbital hybridisation and the potential for stereochemistry. Not only does it provide a platform from which to practice using relevant language, it does so in a way that accommodates language at a range of levels. As such, the same task provides an appropriate degree of challenge to students of varying abilities, both in terms of chemistry and the target language.

Another versatile and valuable tool is cooperative learning, one example of which is reciprocal learning. Pioneered in the early 1980s by Annemarie Palincsar and Ann Brown, it was originally conceived as a means to support learners who had trouble decoding text. This technique empowers students to guide their own learning. For example, instead of asking students to read a text and then answer a series of questions, students work in groups to generate and answer their own questions in a way that feeds their curiosity, rather than stifling it. 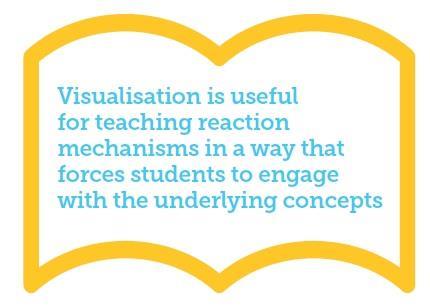 Several tasks are commonly associated with reciprocal teaching. These include prediction, questioning, clarification, visualising and summarising. Students can be issued with a communicative chemistry article and then set to work in groups. The article is certain to include several images, which in conjunction with the headline can serve as a focus for prediction of what the article will be about. Next, having read some or all of the text, students agree in groups on a set of questions related to the text. Such questions could effectively take the form of ‘what does that bit mean?’ to broader ideas such as ‘is this related to what we learned about X last week?’

For the clarification part, students highlight parts of the text they are struggling to understand. Clarification may be provided by the teacher, another pupil or any other available materials, including the internet. These initial stages will help students to write the summary, which is a challenging but worthwhile skill.

Jim Cummins devised a learning quadrant to gauge the demand of different tasks. The quadrant consists of two perpendicularly bisecting continua. One runs from cognitively undemanding to cognitively demanding, while the other moves from context embedded to context reduced. This latter spectrum denotes the availability of supporting material, such as websites, textbooks, visual or audio aids, simulations and so on. Context embedded tasks feature a high availability of supplementary material, unlike context reduced tasks. Clearly, a task that is both cognitively demanding and context reduced will be harder for an EAL student.

Such thinking could be applied to reciprocal teaching. In terms of the Cummins quadrant, the methodology would be an example of a context embedded task, ie one that includes a lot of extra material. However, to make the challenge appropriate to individual learners, the teacher could limit access to extra resources for some or all of the activity. One idea might be to allow open access while students interpret the article, before finally restricting access and even removing the article at the stage when they write their summaries. Another modification could be to encourage students to find relevant material online but written in their first language, which reduces the overall difficulty of the task. Next, they can reread the article and look for any content that matches what they have read online. 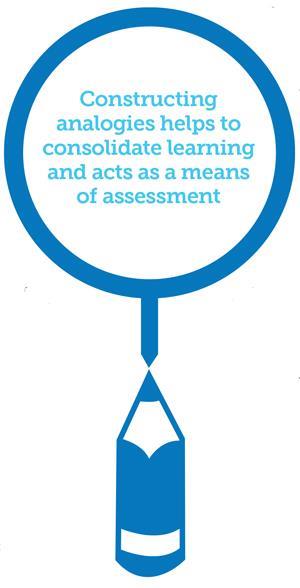 Visualisation is a powerful tool in chemistry teaching. In this context, visualisation would be an exercise where students sketch an image based on their imagination of how something might look. One of the main challenges in chemistry teaching is to develop an understanding of things that cannot be seen. Students also need to be able to interpret symbolic representations of chemical concepts.

The pedagogical model of the chemistry triplet cautions teachers to transition carefully and explicitly between the macro, the micro and the symbolic representation. Teachers have developed the expertise to transfer between, for example, the colour of a solution and the underlying behaviour of atoms and molecules. But students often lack the ability to flit between these macro and micro level ideas. Similarly, students may have varying levels of familiarity with symbolic representations such as chemical equations or diagrams of atomic orbitals. Visualisation is one way for students to construct knowledge about symbolic representation of both the macro and the micro.

I often assign a macro-level visualisation technique to help students decode titration questions. My students can apply the relevant molar equations; the difficulty is unpacking the information loaded into the question. I make them draw a diagram showing all of the stages of the process. This helps them to interpret the text and generates a map to navigate the different stages of the calculation. It can also be used to assess their understanding of the task.

Visualisation is also useful for teaching reaction mechanisms in a way that forces students to engage with the underlying concepts, for example by having students ‘dictate’ reaction mechanisms to each other. One partner faces the board, while the other faces away. The board-facing student describes the mechanism to their partner who then sketches it on a mini-whiteboard. Make some words and phrases taboo, such as ‘curly arrow’, so that rather than saying ‘there’s an arrow pointing from the double bond to the partially positive bromine atom’, students are instead forced to say, ‘a pair of electrons is donated from the π-bond to the electrophile’.

Restricting available language forces students to engage with the concepts. For the EAL learner, this should work well with a sentence frame (figure 1).

Conceiving analogies dovetails nicely with visualisation. There are many reasons to let students make up their own analogies: their teacher’s attempts may either be confusing, banal or so effective as to obviate the need to actually learn the concept. I recently used the lame analogy of the sword-fighting variety of shield as a means to elucidate electron shielding. My students had no trouble with suggesting alternative analogies, particularly when I asked them to visualise the key points. Two students drew a classroom depicting an inverse relationship between students’ grades and their proximity to the teacher. A great follow up activity would be to discuss whether the analogy better represents the effects of atomic radius or shielding. Hence the task not only helps to consolidate learning, but also acts as a means of assessment.

Dictation need not be as dreary. The secret is to make the students into teachers as well as learners. One exercise is a running dictation, in which students race to copy a short passage posted just outside the classroom. Working in pairs, one student runs out to memorise a snippet of the text, before running back to garble it to their scribbling partner.

Figure 2: How to set up complementary passages for a paired dictation

Another example is paired dictation. Two versions of the text are issued, each of which has gaps where the other has words (figure 2). Next, students are instructed to sit back-to-back and read their text to each other. When they encounter words, they read them out, when they encounter gaps, they write down what their partner reads out. This is useful to convey information that the students must memorise, like definitions. It promotes active engagement with a text in a way that places only light demands on the EAL student’s ability to produce language.

This article is rather a paean to the constructivist paradigm, but it serves my original point. Differentiating for EAL students need not be planning-intensive. Rather, the use of open-ended tasks in a student-centred learning environment enables each student to engage with material at the level most appropriate to them.

Tom Husband is a chemistry teacher and science writer