The logic of phlogiston

Despite efforts to teach logic and critical thinking in the classroom, students will often give the answer that they think is expected. Perhaps a discredited theory from the 18th century can help students see how different conclusions can be drawn from the same experiment, suggests Mike Tingle 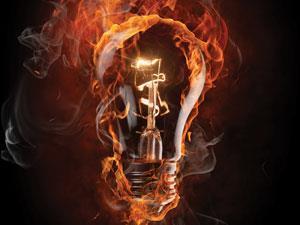 Science education should encourage students to make deductions and draw conclusions from experimental observations. However, at all levels, students often draw conclusions based on what they believe to be the expected ‘right answer’,1 rather than by applying logic to their own observations. To try and teach students to look more critically at experimental results in the classroom, and beyond, the old theory of phlogiston can prove useful once again.

My dictionary defines logic as the ‘science of reasoning, proof, thinking or inference; correct or incorrect use of argument.’ Good scientists apply logic to explain phenomena and develop theories, however, their inferences, arguments, and resulting conclusions, are not necessarily correct.

The phlogiston theory, for example, was accepted for more than 100 years. The theory held that materials that burned contained a fire-like element that was released as the object burned. So well entrenched was the theory, that when Joseph Priestley discovered oxygen in 1774 he called it ‘dephlogisticated air’, believing that the mercuric oxide (or calx) that he heated with sunlight had adsorbed phlogiston, removing it from the surrounding air.

Throughout history, theories that fit the known evidence have been accepted, holding sway until further evidence either disproves them, or gives rise to an improved version. In such a fashion, science and knowledge progress, but to students learning about this progression, their own modern knowledge can colour how they view superseded theories, and even their own science. The theory of phlogiston may seem nonsensical nowadays, but suspending disbelief and examining the evidence can help students to appreciate why it was accepted. It also provides a useful exercise in applying logic. Banishing all thoughts of oxygen requires students to explain experimental observations without being influenced by the modern ‘right answer’.

In 1669, the German physician and alchemist Johann Becher published Physica Subterranea,2 describing the nature of minerals and other substances. He did not use the word ‘phlogiston’, but his ideas concerning combustion, metals and their extraction from rocks later formed the basis of the phlogiston theory.3

In Becher’s theory, terra pinguis is the supposed ‘fire-element’, the component that makes a material combustible. During combustion, this component is released into the air, with flames being the visible sign of its escape. The residue, eg wood ash, is ‘lighter’ (meaning less dense) than the original material – evidence that something has been lost, explained by the escape of terra pinguis. Similarly, heating a metal in air produces a calx, which is ‘lighter’ than the metal for the same reason.

In 1703, Georg Stahl, a German professor of medicine and chemistry, published an extended version of Becher’s theory,4 renaming ‘terra pinguis’ as ‘phlogiston’, from the Greek φλογισ (inflame). Stahl’s theory included the following ideas:

But while the phlogiston theory explained many of the characteristics of combustion, there was a problem with calcining. Becher and Stahl knew that after heating a metal, although a calx may be ‘lighter’ with regards to density, its weight is actually heavier than the original metal. This had been shown by Jean Rey in 1630,5 and confirmed by Robert Boyle in 1673.6 To reconcile this fact with the phlogiston theory, phlogiston was attributed with negative weight – or ‘positive lightness’ – since it, or rather its flame, tends to rise, rather than be attracted downwards by gravity. 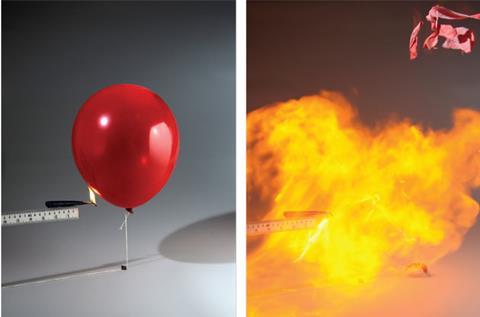 This conclusion was not as ridiculous as it now seems. In the classroom one can convincingly demonstrate apparent negative weight (mass) very easily with a simple experiment. A balloon filled with hydrogen gas, for example, will weigh less on a top-pan balance than an empty balloon.

You could challenge your students to explain this ‘impossible’ result. Even A-level students are usually puzzled by the result. They know that some gases are ‘lighter than air’, but the supposed phlogiston in this experiment appears to be lighter than no air at all. They realise this can’t be true, but few can explain the anomaly. With their minds focused on chemistry, rather than physics, they forget, and/or fail to appreciate, that buoyancy applies to objects floating in air, as well as in liquids.

At the time of Becher and Stahl, the experiment would have been performed using a pig’s bladder in place of the balloon, tying it to one pan of a beam balance.

Note: If there is no hydrogen cylinder available, shorten the string of a ‘phlogiston’ (aka helium) party balloon, tape it to the balance pan, and tare the balance. Burst the balloon and place it on the pan. The reading will be positive. Removing the phlogiston increases the mass, so phlogiston must have negative mass.

In understanding why the phlogiston theory was used to explain experimental observations it is important to stress that, at the time, no-one knew about oxygen. To emphasise this, ask students to imagine travelling back in time to around 1770 – several years before the work of Priestley and Lavoisier led to the discovery of oxygen. Challenge them to explain the following experimental results, without invoking oxygen. (A practical approach for 11–14 year olds is available.)7 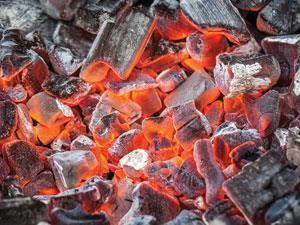 This exercise requires students to apply logic to the experimental results. Although they are not specifically told to invoke phlogiston instead of oxygen, most will probably do so. They will find that the theory, though false, does fit the evidence. From an 18th century perspective, after accepting negative weight as demonstrated above, the phlogiston theory is remarkably difficult to disprove.

...even modern scientific theories are just theories, not absolute fact

Having successfully explained a range of observations using a false former theory, remind your students that even modern scientific theories are just theories, not absolute fact. Hopefully, they will be encouraged to adopt a more inquiring mind, rather than blindly accepting received wisdom.

Eventually, the dominant theory of phlogiston was disproved. Antoine-Laurent Lavoisier showed that combustion requires a gas that has weight (oxygen) and could be measured by means of weighing closed vessels. By using closed vessels Lavoisier negated the buoyancy that had disguised the weight of gases of combustion, solving the weight paradox and setting the stage for a new theory of combustion. Students often adjust or misinterpret their experimental results to fit the ‘right answer’. In that mode they will never follow in the footsteps of Lavoisier, Hennig Brand, William Perkin, Lord Rayleigh, or Alexander Fleming, or many of the other scientists who made important discoveries by following up unexpected results.