Secrets of the trade: Jonathan Hare asks why soya milk tends to form hundreds of floating lumps when added to coffee

Recently I bought a coffee and asked for it with soya milk rather than cow’s milk. At first it looked and tasted good; it was a hot golden brown liquid like every other coffee. However within a few minutes I was shocked to look down and see my lovely coffee had transformed into a watery-looking dark brown liquid with thousands of tiny lumps floating in it. The soya milk had curdled. 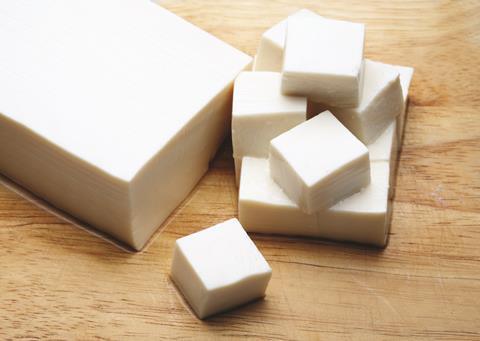 There are many products made from soya beans on the market such as soy sauce, tofu and soya ‘milk’. Soya milk is a soya bean extract that has nothing to do with cow’s milk other than it looks like it and can be added to drinks. Tofu, also known as bean curd, is made by coagulating soya milk and then pressing the resultant curds into soft white blocks. This process can be achieved by adding the soya milk to an acid or to salts like calcium sulfate. These various forms of tofu are washed to create a food product with a variety of textures and uses. Tofu can be used as a meat substitute for vegetarians. In stir fries, for example, it adds texture and protein to a meal.

Going back to my coffee disaster we can now see what might be going on: the coffee is turning my soya milk into tofu. Curdling tends to be worse with more acidic types of coffees. The heat of the hot coffee also helps to speed up the process.

Soya milk contains proteins – long molecules made up of charged amino acid units. Interactions between the amino acids, such as hydrogen bonds, determine the overall structure of each protein. Coagulation is complex, but one plausible chemical explanation is that acidic protons in the coffee interfere with the charges on the amino acids in soya milk protein. Opposing charges of different sections of the same molecule or neighbouring proteins are then attracted to each other so that they clump together to form a semi-solid mass.

Some soya milks are worse than others. Slightly alkaline soya milks would help neutralise any ‘tofu effect’ from strong, acidic coffees. The soya milks that seem to show the least tofu effect have acidity regulators listed in the ingredients. Calcium carbonate and tricalcium phosphate are often added to provide calcium for those who don’t drink cow’s milk; perhaps these help regulate the acidity too by acting as a buffer. In the latter case the tofu is often sold as containing ‘added calcium’, which may be important for people who make less use of cow’s milk products and need other sources of calcium in their diet.

Ordinary tea tends to have a lower pH than coffee, and soya milk does not usually curdle in ordinary tea. The soya milk and the fruit juice in my fridge at home are very similar colour cartons. One day, thinking I was grabbing the soya milk, I put pomegranate juice in my tea. I then decided to add some soya milk to see what it tasted like. The acidic juice–tea combination made the soya milk curdle immediately. I must say my tea didn’t taste very nice but the experiment showed that acidic juice can curdle soya milk even more effectively than coffee can.

Is coffee a guilty pleasure or a life saving elixir? Find the answer and learn more about the chemistry of coffee in this article from Chemistry World.

Is coffee a guilty pleasure or a life saving elixir? Find the answer and learn more about the chemistry of coffee in this article from Chemistry World (http://rsc.li/UPL1uv).