How to teach chemistry through classroom dialogue 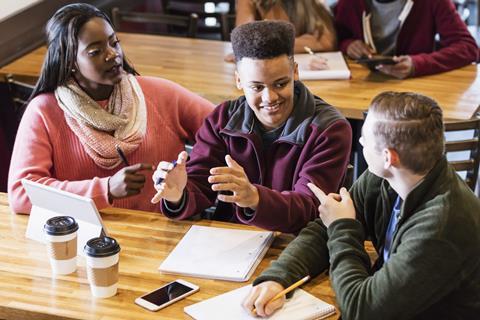 Dialogic pedagogy is the term used to describe a style of teaching that places conversations at the heart of the learning process. Students use dialogue to interpret and negotiate meaning during the critical interrogation of a topic, and students think together. Dialogic pedagogy recognises that knowledge can be constructed through social interaction; it’s not a commodity that can only come from teachers.

Expressing yourself well verbally is useful for much more than just showcase events such as public speaking and debate. Methods designed for teaching oracy can be employed to develop speaking and listening skills in any subject offering a framework through which learning can occur. However, within lessons, effective talk rather than a conversation melee is not an act of luck but requires carefully-planned and well-structured activities. Talk triplets is one oracy technique that can help.

Arrange students into mixed-ability groups of three with each student in the triplet taking on one of three roles:

Students should do all tasks in the same triplet to build cohesion. The roles should be rotated within the triplet after each task. Below are three activities to help introduce talk triplets into the chemistry classroom.

Give each talk triplet a word bridge card containing a fact such as ‘oxidation is loss of electrons and reduction is gain of electrons’, a start point such as ‘electrolysis of copper chloride solution’, an end point such as ‘copper metal is formed’ and five words such as ‘ions, move, cathode, electrons, atoms’.

Give the triplets five minutes to use the fact on the card to link the start point to the end point using the words provided. Groups can keep a record of their score to track their progress and identify troublesome ideas.

A word bridge provides scaffolding that enables learners to reach a greater level of understanding through cooperative learning than can be achieved alone. Keep hold of the cards; they can be arranged by students into a topic map. They can also be used for revision, to visualise links between different topics that share common concepts.

You can use talk triplets to cooperatively plan and then produce a stop motion animation of a reaction, such a cracking or polymerisation, using mobile phones and molecular models. Students can add a voice-over or present their animation.

This task is particularly well suited to revising organic reaction mechanisms; groups make animations for different mechanisms then take turns to present their animation to the rest of the class.

This activity develops critical thinking and encourages metacognition. Display a common alternative conception or misconception on the board such as: ‘molecules expand when heated’. Give talk triplets five minutes to come to a consensus about the statement that explains why it’s wrong and how it could be improved. Choose one group to feedback to the class and a second group to question their ideas.

Effective questioning is a skill that needs to be developed. Initially, you will need to model the technique and provide sentence stems such as ‘why do you say that?’, ‘what could we assume instead?’, ‘what do you think causes … to happen?’, ‘what is another way to look at it?’ and ‘why do you think I asked this question?’

Free oracy resources and assessment ideas can be found on the Voice 21 and University of Cambridge oracy assessment toolkit websites.

Naomi Hennah is a chemistry teacher at Northampton School for Boys

Naomi HennahNaomi is a chemistry teacher and is also studying for a master's in education.