When students compare their predictions with what actually happens to temperature in these scenarios, there will be lots to think about and discuss 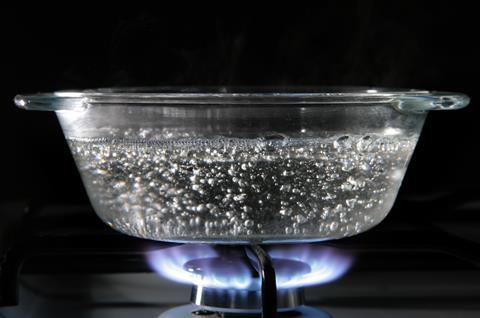 Students are familiar with everyday examples of freezing, melting and boiling, but are likely to think temperature always falls during freezing and rises during melting or boiling. The reality is not so simple. Some temperature changes are counter-intuitive, as can be shown by simple investigations.

Part of the problem is the mismatch between scientific terms and their common use. In everyday language ‘freezing’ or ‘melting’ involves cooling or heating, but in science the term refers only to the changing physical state. Similarly, we understand ‘boil the kettle’ to mean heat the water to boiling point, not turn it into steam.

Students know that melting and boiling involve heating. Since it is necessary to keep heating in order to turn the solid into liquid or liquid into vapour, they assume the temperature must keep rising during the change of state. Similar misconceptions occur with freezing.

The experiments below illustrate counter-intuitive temperature changes in interesting ways for 14–16 year olds. They can also reinforce enthalpy changes, and bond breaking or making, for ages 16–18. Explanations may be beyond most at age 11–14, but the experiments can still be fun.

Scientific method involves proposing a theory, and then testing its validity by experiment. Ask students for their theories about melting, freezing and boiling. Ask them to predict what will happen to the temperature before carrying out the experiments. They can then test their ideas.

We spread salt on icy roads and paths to melt the ice. Why does salt cause the ice to melt? Most students, and probably most adults, assume that the interaction of salt and ice somehow causes a temperature rise, melting the ice. 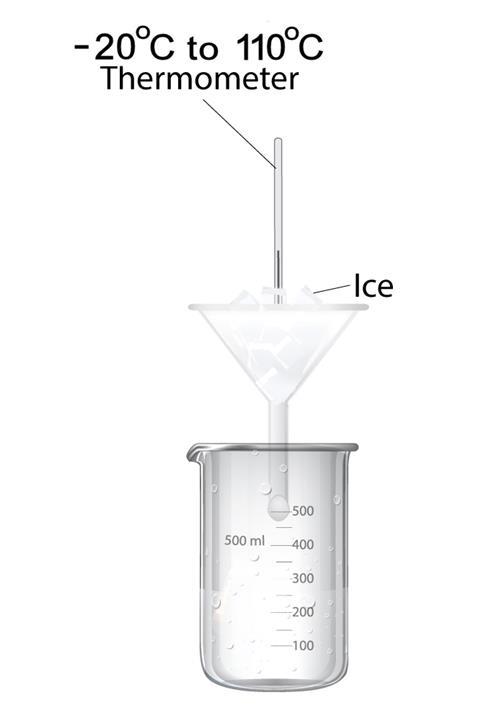 Half fill a funnel with small ice cubes or crushed ice. Clamp the funnel above a beaker. Carefully insert a -20o– 110oC thermometer bulb among the ice, ensuring the scale is visible well below 0oC. Sprinkle a little salt over the ice, and watch the temperature. Water will trickle into the beaker as ice melts. 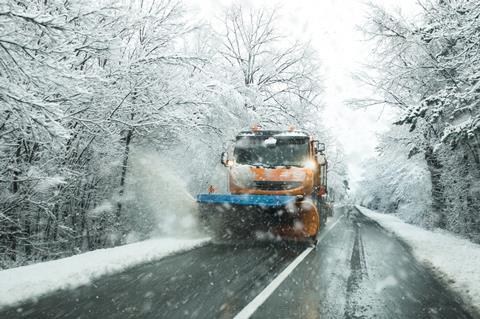 The interaction of salt and ice involves breaking the bonds that hold water molecules together in ice crystals, and separating the Na+ and Cl- ions in salt crystals. Both processes require energy, which comes from the immediate surroundings. Advanced students should also realise that solvation of the ions releases energy, but less than the input needed to break down the ice and salt lattices.

Removing energy from the surroundings causes cooling, so the temperature drops. Even though the temperature has dropped well below 0oC, the melted ice does not re-freeze. It is now salt water, which has a lower freezing point than fresh water.

Most students will correctly say that to freeze a liquid, you need to cool it. They’re also likely to suggest a liquid’s temperature drops while it solidifies.

Melting sodium thiosulfate crystals, then cooling them to a state well below the melting point causes the supercooled liquid to freeze rapidly when a crystal of sodium thiosulfate is added, or the mixture is stirred. Adding crystals or stirring seeds the crystallisation process.

As the liquid freezes, the temperature will rise.

At room temperature, the thiosulfate is a supercooled liquid – it is below its freezing point, but has remained liquid. When it solidifies, bonds form between the Na+ and S2O32- ions, releasing energy, which raises the temperature. 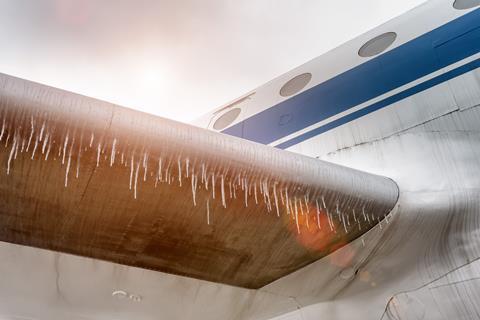 Supercooled water can be found in clouds. An aircraft can trigger freezing, causing potentially hazardous icing-up of aircraft surfaces. Supercooled liquids have everyday uses improving the taste of frozen foods. They are also found in reusable hand-warmers – these use supercooling to store heat for later use.

Supercooling can be linked to the previous topic. Use an ice/salt bath to supercool purified water in a clean test tube containing a clean thermometer. Cool to well below 0oC, being careful to avoid disturbing it. Trigger freezing by stirring, or seeding with a small ice fragment.

To freeze a liquid you must cool it down, but what happens to the temperature when the liquid solidifies? After the previous experiment, students may predict that it rises.

Place a thermometer in a test tube of cyclohexane so that its scale remains visible from 0oC upwards. Record the temperature. Clamp the tube in a beaker of ice and water. Stir gently, recording the temperature at known intervals until the temperature drops to near zero. Plot temperature against time.

When a liquid solidifies, bonds form between the particles (in this case, cyclohexane molecules). Bond formation releases energy, counteracting the energy removed by the iced water. So, the temperature stays constant. Once all the liquid has frozen, no more energy is released, so continued cooling with iced water causes the temperature to start falling again.

Students can reverse the experiment starting with frozen cyclohexane and warming it in a beaker of hot water, recording temperatures until it returns to about 15oC. Other low melting point compounds, such as ice, octadecanoic (stearic) acid or ethanamide (acetamide), can replace cyclohexane to show that constant temperature during melting and freezing is a general principle, not unique to cyclohexane.

Boiling water by cooling it

This is a simple demonstration, but even post-16 students often struggle to explain the results. 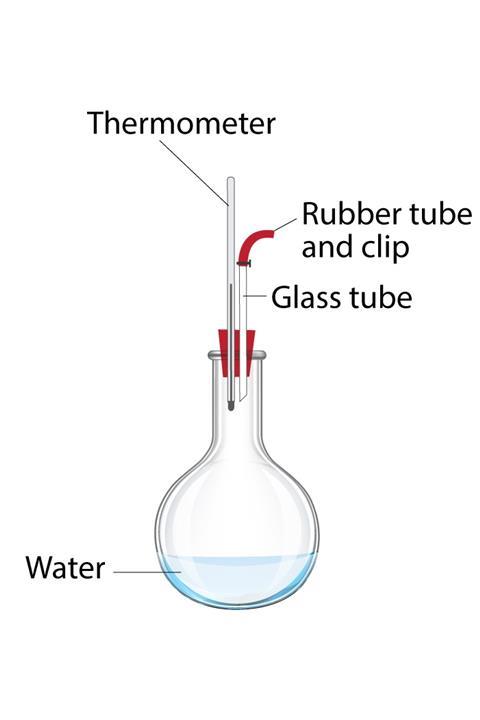 Fit a 250 ml round-bottom flask with a 2-hole bung carrying a 110oC thermometer, a short glass tube, and a short length of rubber tubing with a sealing clip. The thermometer scale from about 20oC upwards must be visible above the bung, so a long thermometer may be better. In front of your students, half fill the flask with tap water. Clamp the flask and insert the bung, ensuring that the clip is open.

Heat the flask until the water boils and steam issues from the rubber tube. Continue boiling for at least 30 seconds while a student confirms that the thermometer reads about 100oC as expected.

Stop heating and immediately close the clip. Invert the flask, so the thermometer bulb is in the hot water. Read the temperature; a little below 100oC, so the water has stopped boiling. Place the clamp stand and inverted flask in a sink or trough.

Ask a student to pour a little cold water over the flask and read the resulting temperature. The temperature drops as expected, but the water unexpectedly boils again for a while. Pouring over further portions of cold water causes repeated re-boiling while the temperature gradually drops to around 30oC, or even lower.

The initial boiling produces steam, flushing the air from the flask, which is then sealed. Cooling with cold water condenses the steam, lowering the pressure inside the flask. At lower pressures, liquids boil at lower temperatures. The water’s temperature is now above its new, lower boiling point, so it boils again. This re-boiling produces more steam, increasing the pressure, and thus raising the boiling point above the current water temperature, so boiling ceases.

This is how early steam engines worked. Steam pushes a piston upwards. Water sprayed into the cylinder condenses the steam, creating a vacuum. The reduced pressure below the piston allows the atmospheric pressure above it to push it back down.

The relationship between pressure and boiling point is also relevant in pressure cookers and when freeze-drying food.