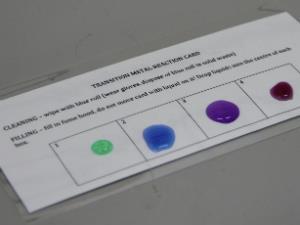 Like many chemists, I am fascinated by the visible changes that occur during chemical reactions, yet frustrated by how few reactions are done for the pure joy of seeing a change.

As a result, I was delighted when I attended a workshop on microscale chemistry led by Bob Worley. In a little over an hour, he took us from polymerisation reactions in Pasteur pipettes, through spirit burners crafted from jam jars, and onto reactions that could only be done safely in classrooms on tiny scales, such as generating small quantities of hydrogen and oxygen gases and detonating them.

Of particular interest to me were the qualitative reactions of transition metals where colour changes, formation of precipitates and effervescence were clear to see.

Carrying out reactions on the smallest possible scale makes a great deal of sense from the point of view of safety, but it also brings financial, environmental and learning benefits.

As part of a first year undergraduate module, I run a transition metal test tube reaction laboratory. We carry out a number of reactions in test tubes – mostly ligand substitutions, but a few oxidations and reductions as well. The students research each reaction as part of the pre-lab so the actual experiment is all about observing and explaining the changes that occur.

I decided I would like to convert this practical to a microscale experiment, requiring the students to use drops of solutions where previously they used several millilitres. I was aware I’d not be able to judge whether the microscale version lead to the same outcomes from the student point of view, so I decided to set it up as a comparison: I have the students do both the old test tube version and the new microscale version side by side, and pick which they prefer.

For microscale reactions, reaction cards can be made by placing the instruction sheet inside a plastic wallet, or by laminating printed paper. I chose the latter and created a card with four numbered boxes for four reactions. This mirrored the four test tubes in a rack and allowed me to use the existing instructions. Where the test tube version required 2 cm3 of nickel chloride, the microscale version required 2 drops.

By the end of the session the students had carried out each reaction in each way and had considered a set of metrics to evaluate which was best. I included information on the cost of chemicals, the number of years an experiment would typically run for and for how many students. I asked them to count the number of pairs of gloves and disposable glass pipettes they used. I did not give them a strong steer on which metrics were more valid, I simply asked them to say which method they felt was better and to explain why.

The results varied considerably with students being evenly split between microscale and test tube reactions. Some students felt it was easier to see colour changes in the test tubes, others felt the microscale card gave clearer colours. A couple of reactions appeared to give slightly different results – a more noticeable precipitate in the test tubes, or a more uniform colour with microscale. The microscale version was generally supported on environmental, cost and safety grounds with reduced waste and chemical consumption being viewed as a major advantage.

I can see the potential of microscale techniques to allow the students greater freedom to explore qualitative inorganic analysis – the small quantities involved and reduced safety concerns mean that a greater degree of freedom could be given to the students.

But the best bit about the experiment was that the students were involved in the development of a lab practical and thinking about the wider issues. They took ownership of a problem rather than wait for me to step in and decide which version we would do this year. As a result, we’ll probably run the two versions side-by-side until one class decides definitively one way or another!

Katherine Haxton is a lecturer in chemistry at Keele University, UK