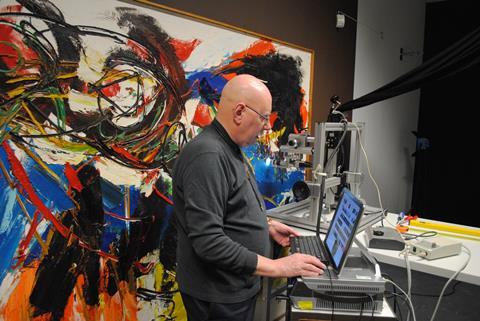 Ida Bronken first heard about dripping paintings at a conference in London in 2006. ‘Maybe half a year later, I discovered drips on a painting I was examining at my previous workplace,’ says Ida, who is now a paintings conservator at the National Museum in Oslo, Norway. Since then, more and more museums worldwide have reported the same thing. Certain paintings had started to soften, even drip. In the most extreme cases, pools of sticky paint had started to form on the floor.

When we visit an art gallery and reflect on the beauty of a great painting, we rarely consider the chemistry behind the colours and compositions of the paints from which it is created.

Introduce your students to the chemistry behind the oil paints used through the years and show them how an understanding of this chemistry can help to conserve a painting for future generations.

To understand what was happening inside the paint, Ida teamed up with art material scientist Jaap Boon at the AMOLF Institute in Amsterdam, Netherlands. Jaap has devoted himself to studying artists’ paint with mass spectrometry since 1992 and was already aware of dripping paintings before Ida made contact. When the pink oil paint that Frank van Hemert had used in a lot of his paintings in the 1990s had begun to drip in 2000, the artist offered some to Jaap for research purposes. 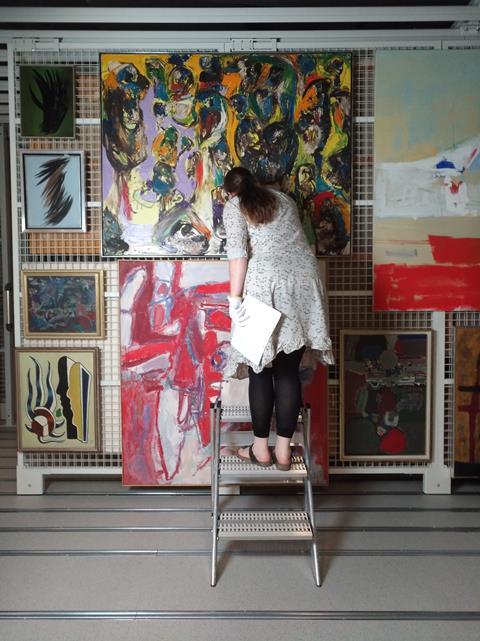 Paint manufacturers were unable to explain to Jaap and Ida what the problem might be. So the pair set about forensically studying dripping paintings. They gathered microsamples from dripping, soft and cured paint on affected paintings by different artists, including van Hemert, Karel Appel, Asger Jorn and Jean-Paul Riopelle.

Patterns emerged from their analyses. Using direct temperature-resolved mass spectrometry, they could see that all the samples from dripping paints were richer in polar molecules derived from triglycerides compared to samples from dry paint. Fourier-transform infrared spectroscopy confirmed that the dripping paint contained more acids and esters.

X-ray fluorescence spectrometry and scanning-electron microscopy suggested the problem only affected paints containing certain pigments or dyes. They wondered whether some pigment surfaces were playing a role in stabilising paint. Jaap’s previous research had suggested that the heavy metal ions in pigments, particularly lead, stabilise paint in Old Masters. ‘They explain why paintings made with simple natural materials have survived for centuries,’ he says.

A scaffolded retrieval exercise with quick-fire questions to see how much students can remember about the article and make links between different topics. Download the exercise (as MS Word or pdf) and the answers (as MS Word or pdf), along with the text from this article.

A scaffolded retrieval exercise with quick-fire questions to see how much students can remember about the article and make links between different topics from the Education in Chemistry website: rsc.li/3eyVMK3

It is not quite this simple, however. Free radicals can also oxidise triglycerides that then form smaller acidic glycerides. This means the radicals that help form the network also initiate competing reactions that lead to acids. This is where the metal ions come in. They scoop up the free acids by coordinating to them. This seems to be the process that stabilises dried paint.

The polar molecules that Ida and Jaap detected in dripping paints were the acidic glycerides that were not incorporated in the crosslinked oil. And because there were not enough metal ions in the paint to coordinate to them, they had migrated out of the paint film. ‘Many thought that the paint had never dried. Our research showed that chemical drying had occurred, but then the paint started to become fluid again and drips formed,’ confirms Jaap. 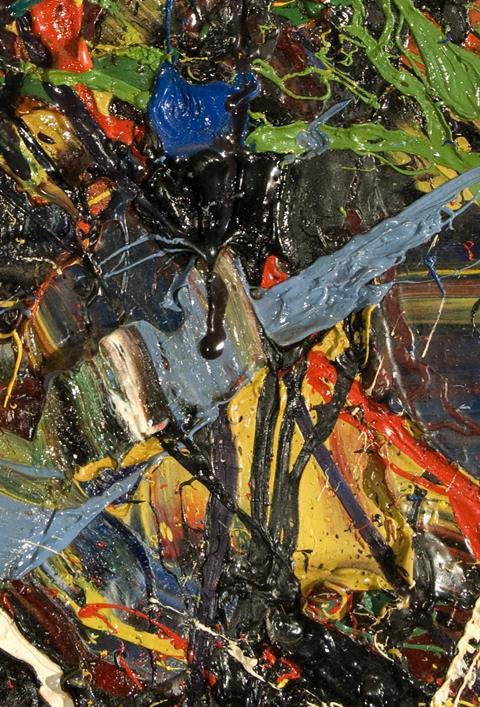 The liquefaction only begins once enough molecules have accumulated and separated from the polymerised film, and this process takes around seven years.

The dripping paintings were painted in several countries with different paint brands. But what linked them is that they were all painted in the 20th century, says Ida. ‘The materials used for paint changed during and after the second world war,’ she explains. Manufacturers had to substitute materials because of shortages and also purposefully experimented with new formulations, adds Jaap.

There were good technical reasons for this. Linseed oil, for example, contains many more double bonds that are needed to assist the drying process. The leftovers can move into conjugation-forming chromophores that absorb blue light. This can tinge pale and bluer colours yellow. Therefore, paint manufacturers tried oils with fewer double bonds (such as safflower, sunflower, grapeseed and rapeseed) in their formulations. The downside was that the dried paints were less crosslinked, and so less stable.

Additionally, new pigments made from organic molecules were invented. This was good because they are less toxic than many of the traditional metal-based pigments, but the organic dyes seem less able to stabilise dried oil. 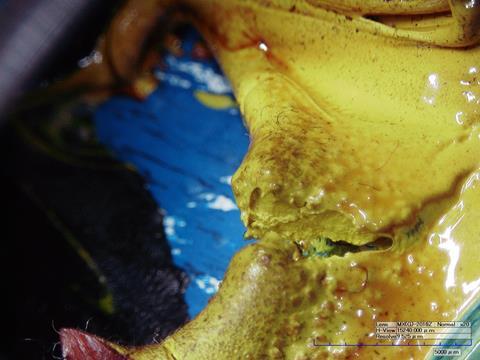 Liquefying paint is now less mysterious, but the problem of how to stop it remains. ‘Preserving the works for the future is the ultimate goal,’ states Ida. Removing drips from paintings can work for a short time, but the drips come back. So Ida and international colleagues have been testing ways to re-dry liquefying paint.

Heat and gamma radiation has been applied to paint samples to trigger more radical reactions and, therefore, more crosslinked polymer networks. Ida has also painted solutions of europium and lead salts onto sample drips, in the hope of scooping up free acids and re-stabilising the paint.

Both methods have shown promise. However, ‘the treatments are not safe for use on a real painting at this stage’, says Ida. ‘A treatment that is able to harden a soft paint layer now might also change something unexpectedly in the paint over time, so we need to understand the implications.’ Though Ida remains hopeful: ‘It should eventually be possible to conserve and exhibit dripping paintings, but more research is needed in close collaboration with scientists.’ 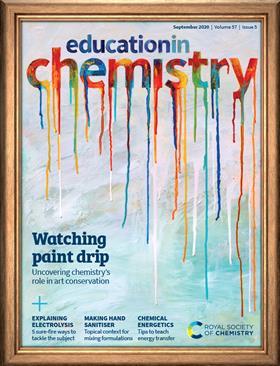 This article featured on the cover of the September 2020 issue of Education in Chemistry. To receive your own personal copy, free of charge, sign up for a personal subscription via Teach Chemistry.