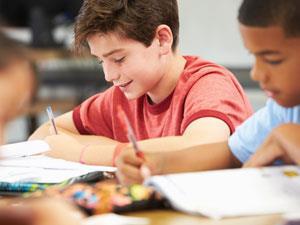 In their perspective on worked examples, Crippen and Brooks write that 'prior knowledge…is far and away the greatest predictor of successful student learning'.1 This contrasts with the often held belief that a student’s performance can be explained primarily by some kind of natural ability. This belief places the teacher in a passive role, whereas aiming to continually extend the student’s prior knowledge makes the teacher 'critical for creating an environment emphasising acquisition of the structure and knowledge of the discipline'.

Ask any colleague whether they use worked examples, and they will of course say that they do. But a closer look at how we use worked examples can be valuable. According to cognitive load theory, novice learners will approach a problem with little prior knowledge of either the approach to use or the chemistry content. Thus, the problem can cause a significant load in the working memory, causing the student to think the question is too difficult.

Worked examples in the sense meant here are not just solutions to problems. Rather, they contain: the problem formulation, the solution steps and the final solution.1 Considering worked examples more formally allows us to think again about how we can use them in our teaching. Suppose a titration calculation has three steps:

This 'fading' approach has substantial grounding in cognitive load theory, as it allows the student to develop a structure for tackling this type of question in an algorithmic manner, taking on an extra bit of work each time. Armed with this structure, the student hopefully will be better equipped to approach more open ended or 'real' problems. For these, the main challenge for the student will be to extract the information required from the particular context so that they can use their, now existing, prior knowledge of the algorithmic approach.

As well as providing a clear 'step-by-step' for the student, worked examples offer two other significant benefits in my view. The first is that the opportunity for feedback is enhanced. By clearly highlighting the steps involved in approaching a question, the worked example allows the student to independently identify the point at which there is difficulty. They can subsequently return to the previous example where that step was illustrated or seek help from a teacher, which is likely to be much more focused on the particular difficulty identified.

The second benefit is that the entire process lends itself to automation and generation of a more intelligent online quiz system. The student could be presented with questions in groups, as described above, and work through each group, completing more of the steps each time. The feedback here could be automated, very specific and with hints and such like built in.

This kind of approach was taken by Behmke and Atwood, who describe their online homework system based on worked examples and cognitive load theory in a free-to-access paper in the journal Chemistry Education Research and Practice.2 A non-numeric example is given (conjugate base strength) with details of the steps involved to guide students through the worked example process. As electronic quiz systems become cleverer, I think there is substantial scope for this kind of approach to help students learn.