The public is the ultimate funder of much of the science research that goes on in the UK. It’s important to think about what’s being developed and how to make the most of the science that we do so that people feel comfortable with what they’ve paid for. Whether that means people getting accurate, engaging information, through the tv or in a newspaper article, everybody, and the government included, has an interest in making sure people feel part of science and are comfortable with it. 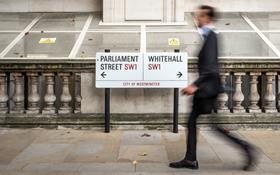 It’s actually how to work with people, how to promote best practice, to encourage researchers to engage the public themselves. It’s about taking different arguments and different opinions from the people and pulling that all together and building that into something that a minister or a senior politician can understand with not very much time to take it all in. You have to summarise it and be confident in your ability to pick out the right bits and decide what’s important.

The fact that you feel right in the middle of something important is really rewarding. You can go home and read the news websites and see the things that you’ve been involved with at work, or even stuff you’ve been personally involved in advising, is now a news story.

How did your degree choice lead to your current role?

I studied chemistry at the University of York, I specialised in natural resources and the environment. Having spent a year in industry, I was clear that I didn’t want to go into the lab and I felt to get past that I needed to do a PhD, so I did a PhD at Imperial College, London. At the same time, I was going to schools to give talks, give careers advice.

I was part of the Voice of Young Science Network that’s run by Sense About Science, so I got quite involved in debates and activities around science communication and science policy. It felt like a natural choice, that I could still use the things I learned in my research and in my degree, but not actually be in the lab. So when a job came up in the department for business, industry and skills that was science communication policy it was a perfect fit.

What career advice would you give to young chemists?

The biggest piece of advice I’d give to anyone studying chemistry is that it’s not just about the lab bench. The idea that you’ll have a forty-year career in the same company is something that probably doesn’t exist anymore. Most people are going to be moving around, maybe you’ll have two or three careers in your life. So just focusing on one set of practical skills or even just one set of technical knowledge is unlikely to set you up for your career. The experience I had outside the lab, working with schools, teaching overseas, doing interviews on BBC Watchdog and things like that. They were all things that added the skills to what I could offer to an employer and I think that was really important for me. You’re a problem solver, you’re good with numbers, you can think creatively, there are lots of things which are actually much more broadly applicable and actually I think often when people are talking about the demand for chemistry graduates, or the demand for graduates with a science and engineering background, what they’re talking about are some of those other, broader skills.

What opportunities has a career in the civil service given you?

I was supporting an expert group of fifteen people from the world of science and the media, so they were senior people in the BBC, editors of magazines, senior scientists, and press officers as well, we had a series of meetings over the course of about nine months to essentially write a national plan for the UK about what we should do about science in the media. It was incredible access to a whole load of very exciting, senior people.

A year later, the report that we wrote has been picked up, nearly all of the actions have either completed or are ongoing and we can really start to see some of the impact of what we decided was important. I’m going to go and live in Bangalore from January onwards, working for the UK government in the science and innovation network. It’s a network about promoting international collaboration in science between the UK and other countries.

I can’t say that three years ago sat in the lab, it would have even occurred to me that this was what I might be doing next. But that’s how often things work out. You pick up a new opportunity and then that leads to something else and it’s exciting to be taking on a new challenge like that, even if it wasn’t part of the plan not very long ago.

What advice would you give to anyone wanting a career in the civil service?