A new type of spectroscopy, infrared Fourier transform broadband cavity enhanced absorption spectroscopy (CEAS), can be used to sniff out chemicals in the breath, including acetone at very low levels. The test could be used in sports science, as an early test for diabetes and to monitor blood glucose. 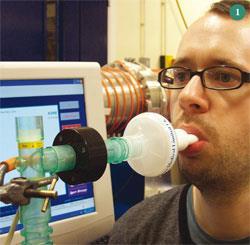 Rob Peverall and colleagues at the University of Oxford, working with spin out company Oxford Medical Diagnostics Ltd and at the University of Teesside, say their technique can detect several compounds at once, down to concentrations as low as 10 parts per million; something that earlier approaches to breath test diagnostics have not yet achieved.

In preliminary work, the team demonstrated proof of principle using near infrared broadband CEAS with a superluminescent light emitting diode (SLED). SLEDs produce bright, coherent light. The initial work showed that the technique could distinguish butadiene from other hydrocarbons as it absorbs radiation between 1.6 and 1.7μm. This is despite the overlap of signal overtones and combination band absorptions at similar wavelengths due to other hydrocarbons present in the test sample.

The team has now carried out BB-CEAS absorption measurements on various compounds using both an SLED and another type of emitter, a supercontinuum source and were able to detect acetone in a simulated breath sample. The same approach could also detect atmospheric levels of natural gas, methane, in the air. With the two sources working together they could determine acetylene, carbon dioxide and butadiene without the signals from each compound masking that due to any of the others.

Oxford Medical Diagnostics is currently developing the research into a breathalyser type diagnostic kit that could be used in sport and dietary studies. For instance, a detector could determine how well an athlete is metabolising fat because acetone levels in the breath rise when 'fat burning' starts during exercise. Acetone in the breath is also associated with diabetes and blood glucose levels so the same detector could quickly test for the early stages of diabetes as well as monitor patients without the need to take regular blood samples. 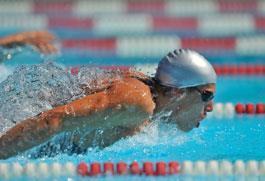 The test could be used in sports science