What is cryo-electron microscopy and how has it changed the world?

Once the severity of the 2015–2016 outbreak of Zika was realised, the race was on to try and stop it. But how? No drugs nor vaccines existed, and nothing was really known about the virus in order to design a medicine to tackle it.

A Purdue University team in the US rose to the challenge, taking the first ever high-definition 3D image of the virus. Other researchers were then able to search the molecule for sites that could be targeted by vaccines or antiviral drugs. Before that Zika outbreak fizzled out it infected an estimated 3–4 million people and caused microcephaly in thousands of babies. The quest is on to find a suitable treatment before a further outbreak rears its head.

These vital images were taken using cryo-electron microscopy; a technique able to take snapshots of biomolecules in exquisite detail.

In the past few years, cyro-electron microscopy has also been used to take high-resolution 3D images of hundreds of other biomolecules, including the enzyme that produces the amyloid of Alzheimer’s disease and the proteins responsible for resistance to chemotherapy and antibiotics. 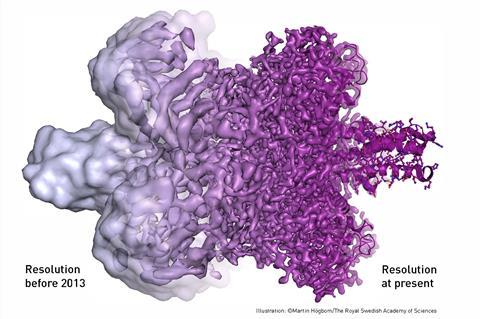 As well taking ‘still photographs’ with high enough resolution that individual atoms can be seen, it is also possible to stitch together cyro-electron microscopy images taken at different points in time, enabling biological processes to be ‘filmed’ as they unfold.

In short, this technique is expected to drive forward the development of therapies against many hard-to-treat diseases.

On the 4 October 2017, the three scientists credited with developing cryo-electron microscopy received what many consider to be the ultimate recognition of scientific achievement: a Nobel prize.

Alfred Nobel (1833–1896) was a Swedish inventor who held a massive 355 patents. His most famous invention was dynamite, but arguably he is now better known for the prizes that are awarded each year in his memory.

In his will, Alfred left much of his wealth for the establishment ‘prizes to those who, during the preceding year, shall have conferred the greatest benefit to mankind’. Since 1901, each year – there have been a few gaps, mostly during the world wars – a Nobel prize has been awarded in the areas of physics, chemistry, physiology or medicine, literature and peace. Famous past laureates (winners) include Marie Curie, Albert Einstein and Ernest Hemingway.

Laureates receive a medal, a diploma and a sum of money at a glitzy ceremony held in Stockholm each December. But more importantly perhaps, the awardees find their visibility suddenly propelled into the stratosphere. Nobel prizes are the Oscars of the scientific world.

This year saw the honour of the chemistry Nobel prize bestowed on three scientists: Jacques Dubochet at the University of Lausanne, Switzerland, Joachim Frank at Columbia University, New York, US, and Richard Henderson at MRC Laboratory of Molecular Biology, Cambridge, UK. 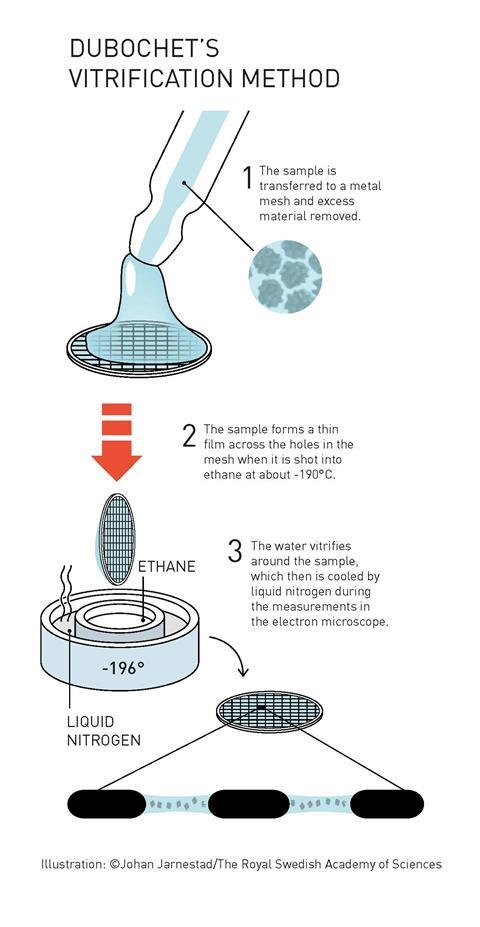 There are two catches, however. The electron beam needed to obtain high resolution images is so intense that it incinerates biological molecules. And, electron microscopes need samples to be in a vacuum. Biological molecules collapse when they dry out, meaning these microscopes can’t be used to view them in their natural state. Or at least, they couldn’t until recently. The trio were awarded this year’s prize for figuring out how to navigate these issues and use electron microscopes to capture the molecules of life both in solution and in unbelievable detail.

One key tweak was to rapidly cool the biomolecules in water to -196oC. The water is cooled so fast that it solidifies in its liquid form, as a glass, rather than forming ice crystals that would interfere with the electron beam. The resulting thin sheet of ice both protects biomolecules from damage by the electron beam and allows them to retain their shape under vacuum. The prefix -cyro is used in scientific vocabulary to mean cold, and therefore this technique is known as cyro-electron microscopy.

Other tweaks the newly-minted laureates are responsible for include huge leaps forward in the computer software used to manipulate the images, taking the early fuzzy 2D images to the high resolution 3D images that are routine today, and the optimisation of every nut and bolt of the electron microscope to enable it to be used for this purpose.

Weighing up the competition

Two other analytical techniques are also regularly used by scientists for the high resolution analysis of proteins and other biomolecules.

X-ray crystallography can only be used for molecules that crystallise, and not many biomolecules do. They also often change shape during crystallisation, meaning you don’t see them in their natural form.

For nuclear magnetic resonance (NMR), the biomolecules are in solution meaning they are captured in their natural form, and how they interact with other molecules can also be observed. But it is only suitable for small, or parts of, proteins.

Cyro-electron microscopy is the best of a good bunch – the biomolecules don’t need to be crystallised, they are captured in their natural form, their size doesn’t matter and it is possible to capture how they behave over time. It’s a technique truly worthy of the honour with which it has been bestowed.

The Nobel prizes are not, however, without their controversies, and just like the Oscars, the diversity – or lack thereof – of the scientific laureates is currently under scrutiny. This year, there were nine scientific Nobel laureates, all of them white men. This is a familiar tale. Of the 177 chemistry Nobel laureates there have been so far, four have been female. None have been black. Questions are rightfully now being asked as whether it is good to keep reinforcing stereotypes by crowning old white men as the only heroes in science each year.