The education of Harry Kroto 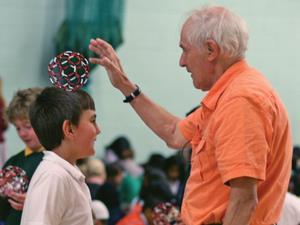 Sir Harry was an outspoken member of the chemistry research community, but he was also a passionate supporter of high quality science education. He famously returned two honorary degrees in protest at the cutbacks and closure of university chemistry departments.

Harry’s education in chemistry began at the school I now teach at, Bolton School Boys’ Division, or Bolton Grammar School as it was at the time. Looking around the school today, Harry’s connection is obvious. Our chemistry block is named in his honour and a framed picture of him is in its lobby.

Another more subtle detail, always overlooked in day to day school life, is the shield showing the gymnastics team of 1956 hanging on the wall of the dining room.

The kid with the funny name

‘I was the kid with the funny name in my form. That is one of the earliest memories I have of school (except for being forced to finish school dinners).’

Harry was able to attend Bolton Grammar School thanks to a grant of £8 a term from the Leverhulme Trust. He was a critic of independent education, in his Nobel prize biography he said of his old school, ‘As a consequence of misguided, politically motivated educational policies, this school has become an independent school and it bothers me that, were I today in the same financial position as my parents had been when I was a child, I would not be able to send my children to this school.’ 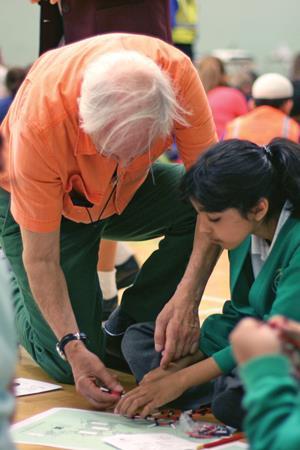 I first met Harry online. I had not long finished my NQT year and was teaching science at a comprehensive school in Bolton. I became a founding member of a partnership of schools in the Bolton area supported by the Ogden Trust, bringing teachers together from all types of schools to promote physics to their students and provide CPD supporting physics teaching. Bolton School was the lead school in the partnership. It was the foundation of this partnership that helped Harry to reconcile his beliefs with the direction his old school had taken.

He launched our partnership by webcast from Florida, patiently sitting at his computer at an unsociable hour while students from different schools asked him questions.

One of our very first partnership events was a visit from Harry. He committed himself to a full day of presentations and workshops with students from many local schools from primary age up to sixth form, and was very much hands-on in all of them.

Watching him sat on the floor helping a primary aged child construct a model buckyball, it was hard to believe he was a Nobel prize winner. He had that ability to bring science to just the right level for his audience. His Bolton accent (if he had ever had one) was long faded, replaced with a distinctly American twang, but it was inspiring to hear him talk with fondness about his old school.

My colleague remembers Harry showing his wife Margaret around the school, pointing out where he had performed particular plays, where the tennis courts used to be, sharing memories of times in particular classrooms.

Not just a scientist

Our partnership continues to this day. I subsequently joined Bolton School and in the intervening years I heard him speak to students a number of times, always a powerful communicator, at ease with students of all ages. He was always remembered by the students as the guy in the orange shirt.

What was clear in the many presentations I watched was Harry’s belief in the education of the whole person. He wasn’t and had never been, just a scientist.

He would always show pupils images of his graphic design work as well as photography and design work by his wife Margaret. He talked enthusiastically about architecture, nature, art, literature – there seemed to be almost nothing that he wasn’t interested in.

He always made it very clear to the children he presented to that education was a gift and it was natural to have a wide range of interests, that creativity is as important to scientists as it is to artists and the two disciplines are not mutually exclusive. He would have been an easy student to write a UCAS reference for. He even shared the school stage with Sir Ian McKellan (another knighted alumnus) in a production of Henry V.

His advice to all children was, ‘Don’t do science for a career but because it gives you satisfaction, then hard work doesn’t seem like hard work.’ 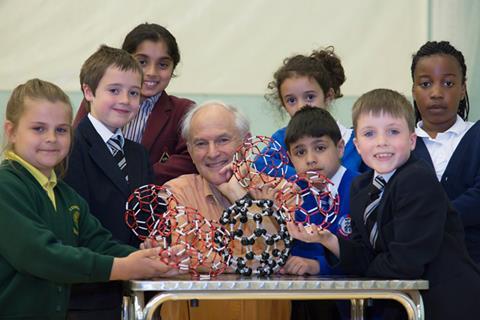 While Harry often publicly criticised science education in England, his discovery of C60 found a place in the school curriculum relatively quickly. In 1985 school textbooks mentioning only two allotropes of carbon became obsolete overnight and now the structure of C60 is taught to all GCSE chemistry students.

His legacy also lives on in the Vega Science Trust, and Geoset, both sites hosting video clips from scientists and institutions for free educational use.

Most of all, his story has much to offer in inspiration for students and scientists alike. From humble beginnings he became one of the greatest scientists in the world. He used his fame to further the cause of science and education, travelling the world engaging audiences from small children to his fellow scientists. And he wasn’t afraid to stand up for his views.

His visits here to Bolton School will be sorely missed, but we’re proud to have been part of his story and feel lucky that we have been able to host him so many times in recent years. We hope generations of students from Bolton and beyond will be inspired by his personal story and that of the discovery of C60.

Kristy Turner is a teacher and school teacher fellow, splitting her time between teaching chemistry at Bolton School Boys’ Division and the University of Manchester.