Is there a dark secret in your crispy potatoes?

Acrylamide may not be quite as bad as it seems, Ida Emilie Steinmark discovers

We hear time and time again that the dark, crispy bits on cooked food are bad for us. It’s a story that periodically makes it to the front pages of the international press, and most recently in the form of a campaign from the UK Food Standards Agency, FSA. Its message was clear: acrylamide, the chemical responsible for the browning, could be carcinogenic. However, if you investigate the evidence, the jury is still out. 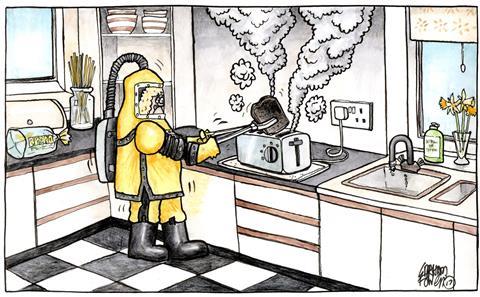 Acrylamide is a relatively simple molecule, consisting of an amide next to a terminal alkene. Though the mechanism isn’t entirely known, it can be formed as a by-product of the Maillard reaction between the carbonyl group of a reducing sugar and the amine group of asparagine, an amino acid. During this reaction, an open-chain carbonyl known as the Amadori product can dehydrate to form dicarbonyls. It is believed the reaction between these dicarbonyls and the original asparagine produces acrylamide.

Crucially, the reaction is favoured above 100°C, so cooking and baking provide the perfect conditions to produce acrylamide. Asparagine is particularly prominent in potatoes and cereals, explaining the higher occurrence of acrylamide in starchy food.

The issue of whether or not acrylamide causes cancer is altogether more complicated. While it is true that high levels of acrylamide have been found to induce tumour growth in mouse models, those levels are very high. For example, a high-intake human adult consumes around 1 µg acrylamide per kilogram body weight per day. According to a 2015 report from the European Food Standards Agency, the acrylamide dose corresponding to less than 10% increase in tumour growth is 170 µg per kilogram body weight per day. Additionally, studies in humans generally haven’t found acrylamide consumption to be harmful, or have been inconclusive.

Nevertheless, health organisations the world over are worried about acrylamide potentially being carcinogenic in humans, and generally take the view that we should attempt to lower our risk of cancer. As such, the FSA suggests people reduce their intake, be it through cutting down on crispy potatoes or by simply ‘going for gold’ and baking or roasting foods to a golden, rather than brown colour. This isn’t a bad idea, and though the campaign could be seen as a bit of a storm in a teacup considering the current level of evidence, it encourages people to think about their food and to seek a well-balanced diet.