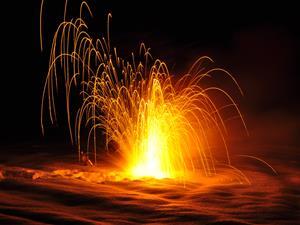 What demonstration do you use to teach group relationships in the periodic table? What reaction shows the similarity of elements in a group and also the progressive chemistry from one element to the next?

Lithium fizzes, sodium pops, potassium explodes. Of course, it’s not practical to demonstrate rubidium and caesium live – but everyone knows their reactions are progressively more dramatic, and you can just show the video. Right?

It’s been nearly ten years since the appropriately titled Sky TV programme, Brainiac: Science Abuse, inadvertently kick-started the first real mainstream discussion on the alkali metals that chemistry teachers could widely participate in. YouTube had launched the previous year and domestic internet access speeds were just about making the widespread hosting and sharing of video clips practical. It wasn’t long before people were recording and sharing their own experiments  …  and the ones they saw on TV.

Brainiac had broadcast dramatic footage of alkali metals exploding in water. But with so many people now able to review and scrutinize the show, suspicions that the explosions had been faked were soon raised and then confirmed.

Despite the assumptions of Brainiac’s production team that the results would be impressive, they were left disappointed with their reactions of rubidium and caesium. The crew took the decision to rig the bathtub with explosives to acquire footage fitting the gaudiness of the show.

Explosions and science from UK Sky One series Brainiac.

Theodore Gray, owner of one of the most famous periodic tables, had also been experimenting with alkali metals and was sharing videos of the reactions on his website. He too was surprised at the disappointing results of his experiments with rubidium and caesium. Even an improvised underwater detonation device designed to rule out the possibility that the metal pieces were simply bouncing off the surface of the water proved unimpressive.

Gray suggested the disappointing results he and Brainiac had experienced were likely due to the fact that as you go down the group the atomic masses of the metals increase. There is of course a corresponding drop in the number of atoms per gram, and therefore volume of hydrogen that can be produced from the same mass of metal.

Using Gray's idea, you could suggest that the drop in volume of hydrogen produced is balanced by the reduction in the energy needed to abstract electrons and pass them to water. Although in school for simplicity we might use the term 'ionisation', the work function is a better metric to use that accounts for the atomisation as well. 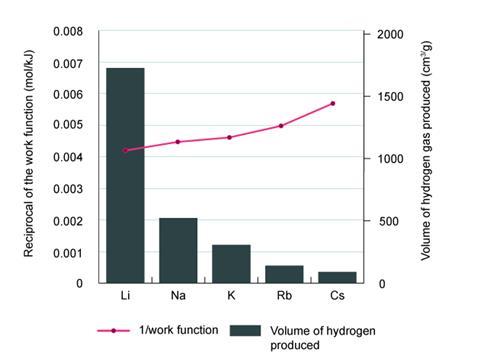 When it came to explaining the reaction to students, this was about as far as I ever went. They got a sense of accomplishment as, when warned to look out for something fishy in the Brainiac clip, many would question the enormous leap in drama between potassium and rubidium and most of the time students would spot the wires fed into the bathtub to detonate the charge. A discussion of the ‘hydrogen-per-gram’ theory prepared students for future work on the mole and strengthened the models they were using to explain the alkali metal reactions.

In the end, although not in the way they might have intended, Brainiac helped produce a great resource to assist my teaching and stretch my students.

The numbers don’t add up

There are some problems with this being a wholly satisfactory explanation though. Despite nicely explaining why you might get more dramatic reactions nearer the middle of the group, the drop in work function (with caesium's being 1.3 times lower than lithium) is utterly swamped by the ~19 fold change in volume of hydrogen per gram of metal. You’d still expect lithium to produce the most dramatic reaction.

In the upcoming September issue of Education in Chemistry, Declan investigates what’s really going on in alkali metal reactions in water