This March, the prestigious chemistry journal Nature Chemistry contained something very unusual: a research paper partially funded by YouTube viewers. The paper, about explosions caused by alkali metals reacting with water, was written by chemists from the Czech Republic and Germany. Among them was British YouTube chemist Phil Mason, and it was Phil that asked for financial support from his viewers in the hope he could turn his science channel into something more. Many responded generously and had expressed an interest in him producing videos about the alkali metals.

Some chemists are now turning to crowdfunding to fund their experiments.2 Crowdfunding is a way of raising finance by asking a large number of people each for a small amount of money. The earliest chemists were often rich or had rich patrons to fund them. Robert Boyle, regarded by many as one of the first modern chemists, was the son of an Earl; Joseph Priestley, whose work led to the discovery of oxygen, was paid to work as a librarian and tutor for the children of Lord Shelburne with plenty of time for experimentation on the side. These days, chemists mostly apply for funding for their work from the government through a collection of organisations known as Research Councils. Funding is often supplied in large grants and is only awarded for research that can be shown to be of economic, environmental, academic or industrial importance.

To add to the challenge, a scientist’s career relies to a large degree on his or her ability to publish papers in the most prestigious journals possible. The more highly respected their work, the easier it can be for them to acquire funding for future work. As such, much of the scientific process is performed behind closed doors; if somebody publishes the same findings as you before you can, it will be difficult to get your work acknowledged.

Having asked for the support of YouTube viewers, Phil needed to share his work with the public, so he allowed them to see the trials and errors of all his experiments over four years. With some cheap high speed cameras and a supply of metals to experiment with, his plan was to make a video explaining the explosive reaction of alkali metals in water in detail.

As he videoed experiment after experiment, viewers were rewarded with fascinating footage of red-hot balls of molten metal, green potassium gas being evolved and strange sights of metal droplets appearing to turn transparent. 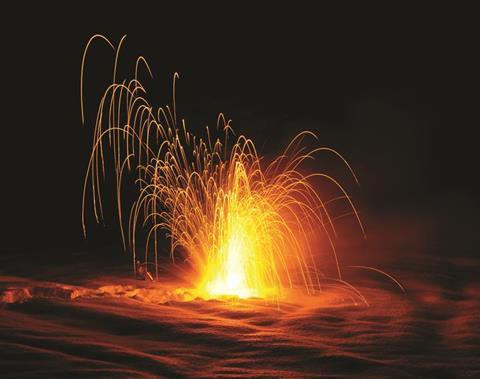 The explosive reaction of sodium metal in water

But Phil was then struck with one major question: why does the metal explode in the first place? The reaction of an alkali metal with water is heterogeneous – the water and the metal are in different states – and this limits how fast the two reagents can mix. Once a piece of metal is added to water, there is only a very small surface area where a reaction is possible at the interface of the two substances. For an explosion to occur, the reaction must speed up as it progresses but most reactions slow over time as reagents are consumed and collide less frequently. In an explosive reaction, the increase in heat and pressure can compensate, causing particles to collide more frequently even if their concentrations are lower.

Effective collisions are hindered further by a cushion of gases – hydrogen gas from the reaction (alkali metals react with water to produce an alkaline metal hydroxide and hydrogen gas) and water vapour evaporating near the very hot metal. This is known as the Leidenfrost effect.

Coincidentally, filmmakers at another YouTube channel, the Periodic Table of Videos, had begun to film the same reactions at higher speed. Martyn Poliakoff narrated as water was videoed dropping onto sodium at around 1000 frames per second. The reaction caused an explosive bang, but it went so fast, the metal vanished in one frame, so it was difficult to see clearly what happened.

There is an assumption that the bang results from hydrogen gas burning explosively in air but alkali metals even explode (without a flame) when oxygen is not present. In a later video Martyn describes the traditional explanation for the alkali metal explosion as a ‘vapour explosion’ occurring after the metal is heated well above the boiling point of water and beyond water’s limit of ‘superheating’. People sometimes scald themselves heating liquids in a microwave; unbeknownst to them, the liquid has been ‘superheated’ above its boiling point. Although the liquid is desperate to boil, it can’t do so without something to assist the formation of bubbles. Disturbing this liquid by adding a spoon or some sugar can nucleate bubble formation and allow the liquid to violently boil over the hands of an unsuspecting victim. Bubble nucleation can be seen in the famous ‘Coke and Mentos’ experiment and in champagne glasses where bubbles often stream from one spot.

When water comes into contact with a liquid, such as the molten alkali metal, above its superheat limit (around 647 K), nucleation is no barrier to boiling; the water at the interface of the two materials will instantly vaporise and begin to fragment the hot liquid, forming droplets that mix with the water. As smaller and smaller droplets form, the surface area increases exponentially and produces a massive amount of vaporised water and in the case of the alkali metals, hydrogen too, and it is this rapid gas formation that supposedly causes the bang.

But this explanation did not add up for Phil. Some of the alkali metals lower down group 1 explode instantaneously off the top of water when added, much too quickly for the metal to have been heated to the temperature required for a vapour explosion. Also, when molten aluminium was lowered into water in a control experiment, no vapour explosion followed. Another process must have been occurring.

Phil had another explanation for the explosions. Metallic structures are held together by a mutual electrostatic attraction between positive metal ions and delocalised electrons (represented on the diagram by black arrows). There are repulsive interactions as well; each metal ion repels the positive ions around it (represented by the green arrows). Electrons are transferred from the metal to the water where they immediately react to produce hydrogen and hydroxide ions. If an electron is removed from the metal structure, there will be a reduction in the attractive force between the metal ions that could lead to the ions moving away from each other if the repulsion becomes large enough. This would expose a new surface of metal to attack by more water and with each progressive step, the surface area would increase, potentially leading to an explosive production of hydrogen.

Delocalised electrons (blue) and metal ions experience a mutual electrostatic attraction (black arrows). As electrons are dissolved into water where they rapidly react to form hydrogen gas and hydroxide ions, repulsive forces (green arrows) dominate and new surface is revealed on which a reaction can occur.

Phil produced a video criticising Martyn’s explanation for the mechanism of the explosion and explained his own idea but without evidence to back it up, and going up against a comparatively well-known scientist, Phil’s idea gained little traction. Indeed, Martyn seemed to dismiss Phil’s idea in a later video, stating that the reactions were well researched and understood.

By this time, Phil had made 10 videos on his experiments with the alkali metals, totalling around a million views, but he wanted to push harder. Phil’s day job was working with a group of scientists based at the Institute of Organic Chemistry and Biochemistry in Prague led by Pavel Jungwirth. Pavel agreed to provide some additional financial resources from another grant he had received so that Phil could investigate further. ‘It’s sort of high school chemistry. It would be very difficult to get agencies to fund it when it looks like 19th century research,’ explains Pavel. He adds that this reason, and the relatively small costs involved, made it an ideal candidate for crowdfunding. ‘I don’t think it would have got started any other way.’ 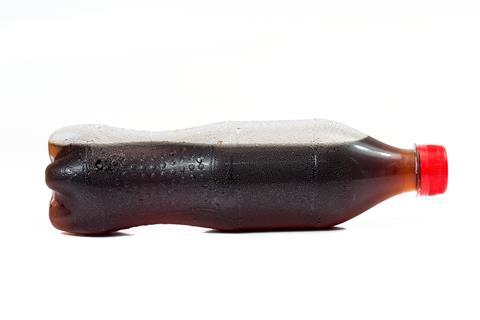 With explosions occurring in less time than Phil’s consumer-grade camera required to shoot one frame, he needed something faster. Pavel knew that Sigurd Bauerecker based at the Technical University in Braunschweig, Germany, had a super high-speed camera that might be able to help unlock the secret of the exploding metal. While Phil headed to Braunschweig with his alkali metals, Pavel and his graduate student Uhlig began designing simulations to see if they could see the crucial moment in their virtual models. Between them, the team needed to find evidence that electrons were transferred to the water and that at the moment of explosion, the metal structure was beginning to break up. They succeeded on both fronts.

In Braunschweig, the team worked with the alloy of sodium and potassium – commonly referred to as NaK – that exists as a liquid at room temperature. NaK is easy to handle and produce in balls of consistent size and surface area. These were dropped through an inert argon atmosphere onto the surface of some water where the camera was waiting. In one ten thousandth of a second, the droplet changed into a spiky ball (or as Phil described it ‘a hedgehog’!) with metal thrusting out into the surrounding water, desperate to relieve the repulsive forces that were building up on the surface. This was exactly the increase in surface area the team hoped to see. At the same time, a wave of blue colour in the solution indicated the presence of dissolved electrons. This behaviour was reflected in the computer models where a small cluster of sodium atoms lost electrons to water and broke up on a picosecond (10-12 or 1/1,000,000,000,000 of a second) timescale. As a control experiment, the team wisely took photographs of water droplets under the same conditions and saw no spikes.

Getting a paper through peer review into such a prestigious journal is a major achievement but only the start of the process by which a new theory becomes accepted. Before Phil can be conclusively vindicated, other scientists may wish to replicate similar experiments and the answer to some questions remain uncertain. Later videos show the same effect happening when caesium reacts with water but what about the solids potassium and sodium alone? Earlier research indicates that although NaK reacts primarily with the formation of solvated electrons, the evidence is less clear for the earlier alkali metals. So although it will be much trickier to obtain, many scientists might hold out for footage of these metals showing the same spike formation or flash of blue before being completely convinced.