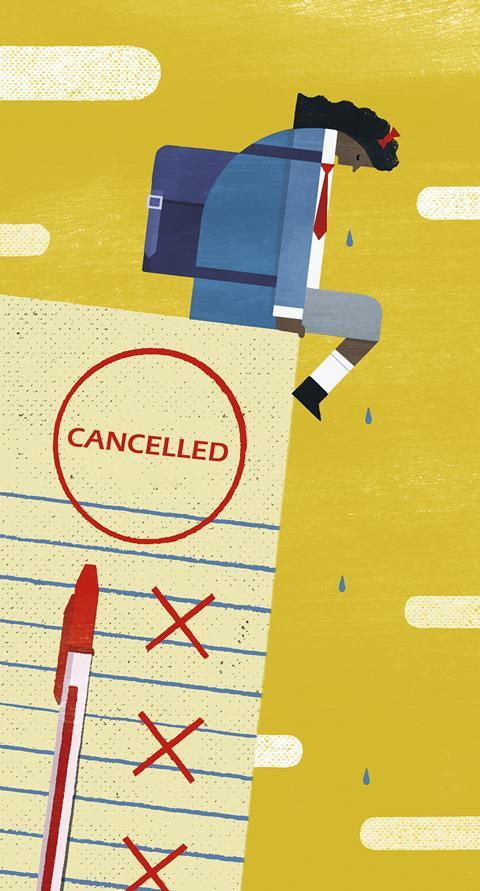 Are cancelled exams and predicted grades worth crying over?

Following the cancellation of exams across the UK and Ireland, exam boards are considering the grades schools and colleges have compiled for their students. Over the next two months they will apply statistical modelling to the data to come up with nationally standardised results.

Geoff Barton, general secretary of the Association of School and College Leaders, is confident that the approach by Ofqual (England’s regulator) will produce grades that are fair and accurate. ‘Schools and colleges know their students well. Standardisation will ensure grades are consistent, and as valid as in any other year,’ says Geoff.

The process of arriving at a grade has been broadly similar across all five nations. Teachers have been asked to grade students who would have sat national exams based on a range of evidence that could come from results in mocks, previous exams from the same course, assignments and non-exam assessments. Grades were also pored over by heads of department and school principals.

Scottish teachers were also asked to provide bands within grades. For example, an A grade, which equates to 70–100% achievement, is split into five bands and students are ranked within the bands. To help teachers, the Scottish Qualification and Curriculum Authority released estimates and actual results from the past three years. Indeed, for all nations, previous school performance has formed part of the modelling exercise.

‘We knew what we had to do, which was to give the pupils a grade and rank them. Whether it’s fair, is just impossible to say – all you can do is use the data you have,’ says Lucy, a chemistry teacher in London. Lucy thinks the process is probably fairer for year 12 and 13 pupils. ‘I know my sixth form really well – I’ve taught them for two years. For GCSEs, it’s very difficult,’ she says. That’s because the sheer number of students means there are many she hasn’t taught. ‘You’re trying to rank pupils, but you don’t know them all,’ says Lucy.

In Ireland, ranking has been challenging for the opposite reason: many subjects have only small numbers of students, so schools provide year rankings instead. ‘One teacher could plausibly and correctly give all his/her students high grades … leading to major disagreements between teachers – particularly where students excel at some subjects but not others,’ says RSC education coordinator, John O’Donoghue.

David Williams, a chemistry teacher in Oxfordshire, was delighted to learn that exam boards ‘were going to trust our professional judgment on our pupils’ performance’, but he reserves judgement. ‘If our grades are accepted, and the system can be seen nationally to have given the same spread [of results] then that would seem entirely fair to me. You’ll get a very different answer in August if all my grades have been knocked down one,’ says David.

A big issue is how to grade students in schools that are improving or have a more able cohort this year. Lucy is predicting more A and A* grades for her chemistry students than last year and is concerned they will be adjusted downwards given historic performance. In England, Ofqual is considering whether such demographic differences might provide the basis for appeal.

Every year there are students that surprise you, by doing well or badly – this year there won’t be those surprises

Grading and ranking have placed an added burden on teachers trying to organise online learning and those who are inexperienced. One principal teacher for science told the Scottish Parliament’s Education and Skills Committee that she was struggling to set work for classes and manage the estimate process. ‘I’m doing the Scottish Science Baccalaureate for the first time – given my inexperience I can’t imagine that there’s going to be a lot of faith in my judgement as a first timer,’ she says.

How might this year’s exam grades affect students’ futures?

Christine Harrison, professor in science education at King’s College London, says says she ‘hopes schools will be more accepting of students who wish to continue a science education in the senior phase, and not have strict cut-off grades, especially where students move for sixth form, and the evidence used to decide grades is unknown.’

For David it’s the lack of practical work that’s an issue. ‘We’ll have to come back and do the practicals, so there will be an impact on flow and linking practicals with the understanding of the theory that we’ve done,’ he says. Another concern is that not having taken exams means students miss the chance to consolidate their learning and commitment might wane.

‘My suspicion is they’ll think, as usual, there’s lots of things they can’t do, but on the whole they’re good enough to come and do the courses that are going to be put on next year,’ suggests Christine. Michael Seery, chair of chemistry education and director of teaching at the University of Edinburgh, agrees. He’s concerned students will start the year not with an academic deficit, but a ‘mindset deficit’. Students will understand core chemistry but won’t have had the opportunity to confirm to themselves they’re ready to come to university.

Edinburgh will offer its students a transition course they can work through before they take up their place. ‘We’re not going to teach school chemistry but just offer checkpoints on some core concepts,’ says Michael, so students will get a sense of their own understanding and can access help to address problems.

Once results are out, there will inevitably be appeals. Students in the Republic of Ireland, Northern Ireland and England will have a chance to sit exams later this year if they’re unhappy. Students in Wales and Scotland will have to wait until next summer.

Teachers doubt many students will be shocked by the grade they get. Most pupils know what their schools think of them and know how they’ve performed in previous exams. ‘We predict every year and we’re usually right or within a grade,’ says David. But, adds Lucy, ‘every year there are students that surprise you, by doing well or badly – this year there won’t be those surprises.’