John Holman’s career spanning schools, university, research and leadership gives him a unique perspective on his policy work today. Rowan Frame finds out how so many career opportunities snowballed from an invite to co-author a textbook

Sir John Holman is the first person from a school teaching background to become president of the Royal Society of Chemistry (RSC). He has also been a headteacher, curriculum developer, university professor and government adviser, but how did all this come about?

John modestly suggests that the extraordinary sequence of experience that constitutes his CV is part down to opportunism: ‘I do tend to say yes when people suggest things.’ But he also acknowledges that he is fortunate to have had such a multifaceted career: ‘because I am able to draw on being a teacher, being a head of department, being a headteacher and working at a university – that rich career with all those wonderful opportunities – I am able to give quite rounded advice to policymakers.’

I’d never written [a textbook] before, had quite a busy job, child on the way,
but I said yes

Extending his horizons beyond teaching began early in John’s career. His head of department at Bristol Grammar School, Graham Hill, was first to introduce the idea to John that there are other things you can do alongside teaching. Graham asked John if he would co-author the textbook Chemistry in context. Now in its 7th edition, the book turned out to be a major success. ‘I’d never written one before, had quite a busy job, child on the way, but I said yes. It was a great opportunity.’

So from early on, John saw himself as having two identities: one was as a teacher, one was a professional chemist who tries to find successful ways of teaching his subject. ‘This dual identity has been very useful to me in my career. It’s been a source of strength because teaching is a hard job.’

Holding a core teaching job while working on other interests really became a habit when, in 1984, the Association for Science Education (ASE) invited him to run a curriculum development project, Science and technology in society, on part-time secondment from his job as Head of Science at Watford Grammar School for Boys. In the following decade, John was seconded onto various curriculum development projects, including as director for the Salters Advanced Chemistry project for the University of York. He was also involved in writing the national curriculum for science in 1988–89. 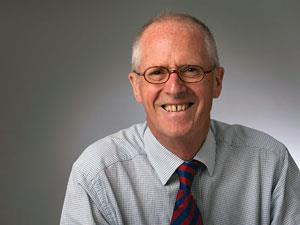 John then took the post of headteacher at Watford in 1994, ‘if only to show myself I could do it.’ It turned out to be the most challenging, but most rewarding, of all his roles. Although he was reluctant to leave schools, a similar curiosity about working in a university led him to accept a professorship of chemical education at the University of York six years later. At York, he founded the National Science Learning Centre, began government advisory work, and also lectured undergraduates in chemistry. ‘It was hard work, but teaching undergraduates is such a privilege. For a school teacher, it was quite unnerving being in front of several hundred people in a lecture theatre, all of whom appear to be listening to you!’

John feels his career has been shaped by taking opportunities that came his way, and he thoroughly recommends teachers get involved with something that gives them opportunities outside the classroom, such as the ASE or RSC. But he realises that ‘it’s rather easy for me to say this with all the opportunities I’ve had. They’re much rarer nowadays.’ Indeed, he describes teaching in the 80s and 90s as a different world: ‘What’s changed enormously is the pressure of accountability. Teachers work a lot harder now than they did when I started and they have a lot more pressure on them.’

With this in mind, John is quick to acknowledge the role mentors have played in his career. Without question, Graham Hill’s invitation to co-author Chemistry in context had a major impact on John’s career. He is also keen to highlight how his headteacher at Watford Grammar School for Boys, Keith Turner, was particularly supportive of him taking on extra work: ‘he let me take on new projects alongside my teaching, including overseas experience. Few headteachers could do that today.’ But he thinks headteachers ‘should invest in teachers because they are the school’s most important asset. Invest in them, think about their careers, think about how you can lift them up through being imaginative about their CPD and giving them opportunities.’

So, now that his tenure as RSC president is coming to an end, what’s next for John? Drawing on his unique set of experiences, he wants to focus on teachers’ professional roles and see how accountability systems could be improved. ‘If we want to get still more out of our education system, which I hope we do, we’ve got to back off a bit. Governments have squeezed a lot of improvement out of the system, but I don’t think any more improvement will come from pressure alone.’ He thinks learning from other countries where teachers are just as committed and high performing as they are here, but have more professional autonomy, could be a way to find the answer.

This is particularly significant to John because one thing he argues hasn’t changed since he began teaching is the critical importance of teachers in educational success. Each year for 15 years, John has asked his undergraduates why they chose to study chemistry. The most common response is always ‘my teacher.’ ‘It hardly changes, year on year,’ says John. ‘Teachers have always had the power to inspire someone in their subject, and they always will.’