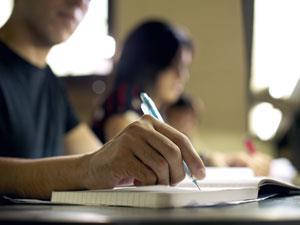 Learners with strong metacognitive skills are able to make realistic judgements about their own performance and can make good decisions regarding the allocation of time to spend on different topics during their studies. The authors report a study that probed the relationship between accuracy of self-evaluation and learning gain in the study of stoichiometry to ascertain the impact of metacognitive ability on performance. The topic of stoichiometry was chosen as prior knowledge was limited among students and success requires a range of different scientific skills.

A total of 91 students participated in the study, being taught in large group lectures and small group tutorials. Pre-test data was collected using a 19 item test, with each item also asking students to express their level of confidence in their answer. Students were then categorised as ‘realistic’ (R) or ‘overconfident’ (OC) based on the match between their confidence in their answers and whether or not their judgements were correct, with no students being classified as ‘underconfident’ (UC) at the pre-test stage. A similar process followed for post-testing, allowing students to be classified further into the categories OC-OC (n=50), OC-R (n=13), R-R (n=11), R-OC (n=15) and R-UC (n=2) based on the confidence levels at the pre- and post-test stages.

The size of the OC-OC group shows a general tendency for students to overestimate their performance level before and after instruction. A smaller sample were realistic in their self-evaluation throughout the study (R-R), with a similar number improving their skills in this area (OC-R) and exhibiting diminished skills (R-OC) during instruction. The most interesting findings related to the normalised learning gain (NLG) achieved by students in the different groups. Students who were overconfident in the post-test faired least well, with the OC-OC and R-OC groups achieving NLGs of 32% and 15% respectively. Those who were realistic at the post-test stage did much better, with the OC-R and R-R groups improving by 53% and 43% respectively.

Students who remained or became overconfident during instruction did not gain as much from the learning experience as those who were realistic throughout or those whose self-evaluation became more effective during the course. The high proportion of students who were overconfident at the end indicates that students are slow to develop metacognitive monitoring skills when instruction does not focus on the development of such skills. The authors suggest that metacognition should be addressed more effectively in teaching, including the use of assessment tasks with higher cognitive demand coupled with appropriate formative feedback to ensure that all learners can achieve their potential.