In celebration of the 50th anniversary of Education in Chemistry, John Emsley takes a look at the 50th element

Tin was the key to three technological advances. The first occurred five thousand years ago when a metal worker found that adding tin to copper produced bronze, a tougher metal for tools and weapons.

The second was the realisation that a coating of tin would protect iron - tinplating became an important industry in medieval Europe. The third was the use of molten tin to manufacture 'float glass', which is the modern method for producing perfect window glass. 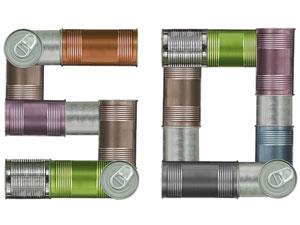 Tin cans for preserving food were first introduced in England, in 1812. Concerns about incorporating tin into the diet mean that its level is now regulated, and the problem is solved by lacquering the inside of cans. This method of preserving foods is declining, but billions of cans of food are still produced and the tin is reclaimed from around a third of them. Tin foil, where the metal was hammered into thin sheets, was used for centuries until it was replaced with aluminium.

Pure tin undergoes a transition when cooled below 13°C, changing from a solid metal known as β-tin (white tin) to a powder known as α-tin (grey tin). The transition is imperceptibly slow at 0°C and is still very slow at -10°C, although in places where such low temperatures as -33°C are quite common, it becomes much quicker.

Tin 'plague' came to public notice during the hard Russian winter of 1850 when the temperature dropped to record lows for weeks on end. The most noticeable effect was on organ pipes in churches, which were 95% tin. They became covered with scaly patches that crumbled when touched.

Some tin compounds are decidedly dangerous, the triorgano tin family especially so. Trimethyl tin and triethyl tin analogues are particularly toxic because they damage the central nervous system. Larger organic groups were thought to be much safer and tributyl tin (TBT) compounds became widely used as biocides, especially to prevent barnacles fouling the hulls of ships. However, by the 1980s it was clear that species such as oysters, marine snails and dog-whelks, which flourish in coastal waters, were becoming infertile due to TBT and it was banned in the early 2000s.

The only tin ore of commercial significance is cassiterite (SnO2). Total output of new tin is around 300,000 tonnes per year and the main producers are China, Indonesia and Peru. Half the tin produced ends up in solder and a fifth goes into tin plate. The rest finds many uses: in pewter, bell metal, heavy bearings and even dental amalgams.

Traditional tin-lead solder has now been replaced by a new solder consisting of 95.5% tin, 3.9% silver, and 0.6% copper. It is known as SAC after the initial letters of the elements' chemical symbols.

The niobium-tin alloy Nb3Sn is used for superconducting magnets.

Tin compounds are also useful. Tin(iv) oxide, SnO2, has been used for ceramics for millennia. The ancient Babylonians produced wall tiles with a tin-based glaze. Some tin pigments give beautiful colours, such as tin-vanadium (yellow) and cobalt-stannate (sky blue, known as cerulean blue). Tin dioxide is also used in some carbon monoxide sensors because as it absorbs the gas its electrical conductivity increases.

Tin(ii) chloride, SnCl2, is used as a mordant in dyeing calico and natural silk. The tin becomes attached to the fabric and then the dye molecules attached to the tin. In the case of silk dyes, the mordant and dye can more than double the weight of the fabric.