John Luton teaches at Varndean College in Brighton. In 2021, he ran a project with the support of Elevating Chemistry aimed at consolidating course content with his second year A-level students 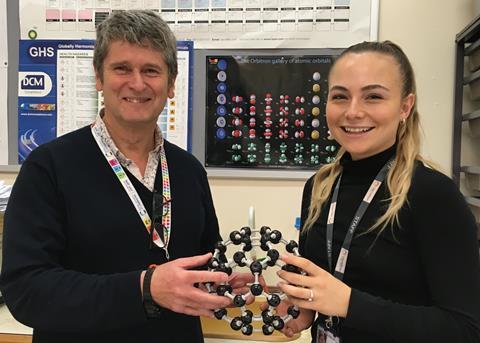 John and Amelia at Varndean College

We decided to build a consolidation programme, initially focussing on the second year A-level students (we have International Baccalaureate as well). When we were planning the project (in November 2020), the IB were carrying on with exams as far as we knew, but for A-level we already knew that wasn’t going to happen, and instead we were looking at collecting this ‘basket of evidence’.

We hired two tutors (Tom, a former Varndean student, and Amelia, a science technician) who provided hour-long tutorials focussing on consolidating learning to small, tiered groups of students each week. For the A-level students, we continued that up to April, by which time the boards had given us material to assess the students. So we knew what the exam was going to be on, and we would have that as our consolidation focus prior to the tests. We did that for four assessments which then collected their basket of evidence which led to their allocation of grade.

At this point, the IB had also decided it wasn’t wise to host exams, so we started to build in a programme of consolidation for them – mainly looking at the first years. The second years were looking at their investigative assignments, but the first year IBs had also been affected, and have the problem of not having had GCSE. So Tom focused on them, and picked up and ran consolidation with the standard level group, and caught up work with them. That’s been highly successful.

Meanwhile Amelia ran a full Friday revision session with the first year A-level students. And Amelia did make a point that it had been easier with the tiered groups of second years rather compared to the first years, where they were allocated into groups but not streamed.

What were the main challenges?

There were a few online sessions in the beginning and this was a challenge. It was difficult to get people to put their cameras on, and so was very difficult to gauge whether people understood what’s been said. Some people have access to really high-quality IT provision, but there are some who are in households where they don’t have that. The college has given Chromebooks out, but it has nonetheless been quite difficult, and that still relies on having a good internet connection. So the online sessions weren’t as effective as face to face, but they did keep things going. Which is way better than nothing.

Tom and Amelia were both new to tutoring. How did you manage that relationship, making sure they had the right level of knowledge and were confident in what they needed to do?

They ran a programme that was set up by me and the other chemistry teacher. We devised the material and they ran with that material to start with. They were looking at things like going through exam questions. So pretty straightforward to start with.

It rapidly became apparent that they were both complete naturals, and I was very lucky with that. To start with they were highly supported and ran a tight programme that was set for them. But they began to chat with me about it, and to build their own resources. Eventually, they were pretty much running it. I would say ‘cover this, cover that’, and they would go and run it. That was really lucky.

It would have worked if this hadn’t been the case, but it ran so much better than I ever anticipated. And that is down to those two people, I’m without any doubt.

What was the effect of the intervention on you as a teacher?

To me it felt like I had some backup. What I couldn’t do very much of was to consolidate because I was going through the content, and there’s a significant amount for both A-level and IB, so I was just desperately covering the ground. Normally you cover a topic, and then you test the topic. But there was no way I could do that. So having the feeling that I had someone there backing me up and doing that consolidation really took the weight off my shoulders.

What was the effect of the intervention on your students?

The A-level students were awarded Teacher Assessed Grades (TAGs). I would say that the students were better prepared for the mini “tests” set by the board and run by ourselves to gather evidence for the TAGs. This meant that I felt my TAGs were more accurate a better reflection of the students’ ability. In short I am sure the extra time spent consolidating and practising questions with Amelia and Tom led to a better and more reliable outcome.

Meanwhile none of the IB students had their results downgraded from my prediction. Most were upgraded. They didn’t receive a lot of the tutorial support, but they did receive some.

Will you be carrying on with any of these interventions beyond the length of the project?

Next year, I will use the remaining money to continue the consolidation process. So it will still continue on in a small form.

Both the first year A-level and IB students who are going into their second year have already had some support through the project. I know this has had a big effect, because it’s kept them going.

What was the most beneficial aspect of taking part in this project?

The most surprising thing was how brilliant Tom and Amelia were, and how well that went. That was great both for them and for me. Also the fact that the consolidation was taking place, so I feel that the students who are now going off to university will be better prepared than they would have been otherwise.

We also managed to keep the Olympiad going, and the Cambridge Chemistry Challenge, and had some brilliant results. Tom worked with the extra-curricular groups, so we could keep that going. I could have abandoned that ship but taking part in these programmes is useful to put into personal statements – that they took part in public exams and have results from that. And you get more of a view on how universities operate off the back of that.

Over the last few years, students have just had such a raw deal. This has been at least a bit of light in that dark gloomy place.

Choosing the tutors is most important. Have the best people you can, and probably not yourself because that’s just more of the same. People under use ex-students. They’ve been through it, they’re only a little bit older, but when they’re six months older at that age it’s quite a lot. So you have people who’ve been through it, know it and are happy to help out. And it helps them as well.