Chemiluminescence - the oxidation of luminol

Chemiluminescence is a 'fascinating phenomenon where a chemical reaction produces light without heat'. The oxidation of luminol is a good example.

The oxidation of luminol

Dissolving luminol (3-aminophthalhydrazide or 5-amino-2,3-dihydro-1,4-phthalazinedione) in a base abstracts the protons from the two cyclic nitrogen atoms, resulting in a intermediate which is readily oxidised by hydrogen peroxide or household bleach (sodium chlorate(I)) to an excited intermediate, the decay of which to a lower energy level is responsible for the emission of a photon of light.

Having experimented with several different methods from a variety of sources to demonstrate chemiluminescence, often with disappointing results, I found the following method, by Declan Fleming of the University of Bristol, to work effectively in a blacked out classroom setting. This method results in a relatively rapid rate of reaction, producing bright chemiluminescence albeit on a short timescale.

I use a colourless, spiral, plastic tube to highlight the 'glow', but other methods of mixing the two solutions - basic luminol and dilute hydrogen peroxide - in approximately equal proportions, can be equally impressive. As an alternative, for example, soak a rag in one solution and dip it into the other solution - the rag glows as you wring it out. 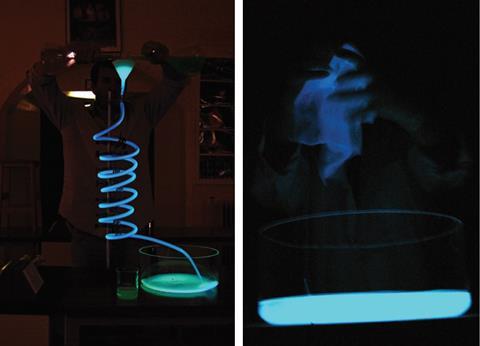 To 1 dm3 of deionised water add the sodium carbonate, sodium hydrogencarbonate, ammonium carbonate, copper sulfate and luminol. Swirl to dissolve. In a separate flask add 50 ml of 30 vol hydrogen peroxide solution and make up to 1 dm3.

The two solutions, when mixed in approximately equal amounts will react to oxidise the luminol, producing the characteristic blue glow. If you add a small quantity of fluorescein to the copper sulfate solution you will get a green glow.

To produce an effect as shown in the photograph construct a spiral of colourless, plastic tubing with a funnel in the top and a waste collection vessel (beaker) at the bottom, and then pour the two solutions into the spiral at the same time.

This demonstration can only be appreciated in a dark room, so black out blinds are invaluable. The solutions do not keep well and should be made on the same day of use. Old luminol is unreliable, but fresh yellow/grey luminol works well

Demonstrating rates of reactions is easily done in the classroom, but too often teachers resort to using the reaction between marble chips and hydrochloric acid. The oxidation of luminol makes for a welcome change as a demonstration, or for a class-based investigation. The effects of temperature, concentration and catalysts all have a profound effect on the rate, and thus the intensity of the light produced.

Try mixing smaller quantities of the two solutions in 50 ml beakers at different temperatures, or altering the concentration of the hydrogen peroxide solution and note the effect. Use different transition metal ions to catalyse the reaction, or none, and observe the effect - judge the light intensity and thus the rate by eye.

Luminol is an irritant.

Once made up, the diluted hydrogen peroxide solution is an irritant (skin, eyes and lungs) and the alkaline luminol solution is low hazard.

Sodium carbonate is an irritant (skin), and ammonium carbonate and copper sulfate are irritants and harmful if ingested.