However, a dramatic impression might be needed to shake the misconception some students hold that endothermic reactions cannot occur spontaneously. This is where the solid–solid reactions of barium hydroxide with ammonium salts are useful. Here I describe two. The thiocyanate reaction works much faster and is my preferred method, but the chloride salt is more widely stocked and thermodynamic data for it is easier to find. 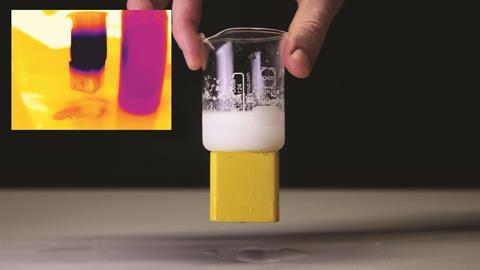 Work in a well-ventilated room or a fume cupboard. Take an initial reading of the temperatures of the two beakers and point out the liquid water on which the barium hydroxide beaker is standing. A digital thermometer that can be connected to a display or digital infrared thermometer can be useful here.

Add the ammonium salt and mix the powders with the stirring rod. The temperature will rapidly drop to approximately –20°C, the water on the base freezes causing the watch glass or wooden block to freeze to the flask. In the case of the thiocyanate reaction, the solids dissolve in barium hydroxide’s water of crystallisation. Damp red litmus held over the top of the flask turns blue to reveal the presence of ammonia vapour – take care not to inhale the toxic vapour.

Once the production of ammonia has stopped, the beaker can be passed around the class, taking care to ensure the watch glass is removed first or that it is supported from underneath.

In the reaction of barium hydroxide with ammonium thiocyanate, the opposite happens – a liquid (as well as ammonia vapour) forms from a solid and the contrast with the hot ice demonstration can reaffirm the connection between bond breaking and endothermic processes.

As the reaction finishes, an opportunity presents itself to keep another misconception in check and shore up students’ conceptions of conservation of energy. It’s worth asking what will happen to the temperature of the cold mixture and why. How many students will explain this process using concept of ‘cold’ spreading out rather than heat energy from the surroundings being absorbed until thermal equilibrium is reached? A misconception probe for 14–16 year-olds on thermodynamic topics related to this demonstration is available.2

The reaction for ammonium chloride is usually written as follows:

If showing this reaction to older students, they can use thermodynamic data to predict whether the reaction should to be spontaneous.3

Wear eye protection. All waste can be disposed of down the sink with plenty of water.