Properties of alloys: finding the NaK

Why is NaK a liquid? Declan Fleming finds out

In the July 2012 exhibition chemistry article we looked at Field’s metal, which melts at a surprisingly low temperature of 61°C. This mixture of indium, bismuth and tin is great for showing how an alloy will have different properties from its constituents. Another such alloy is a mixture of sodium and potassium, and it displays a fascinating property at room temperature that students really don’t expect.

Ensure all equipment is completely dry. Cut one piece of sodium and four pieces of potassium all about the same size – aim for rough cubes with sides of 3–4 mm (mass < 0.1 g). Leave these separately under a layer of the solvent in the petri dish until ready to use. 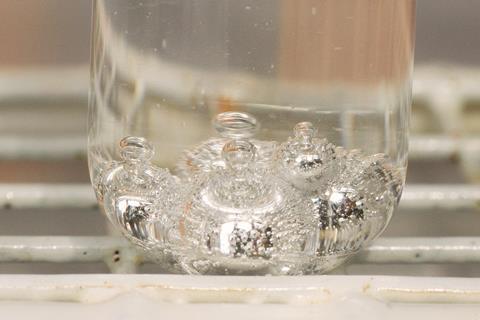 Add solvent to both test tubes to a depth of about 3 cm. Add the pieces of sodium and potassium to one of these. The metal will sit at the bottom of the liquid. Work with the tube in a rack to avoid spilling on your hand should the glass break. Use the spatula to chop up and mash together the pieces of metal. After about 30 seconds, the metal mixture will feel very soft and you may be able to see liquid metal among the surface oxides. Add two drops of butan-1-ol. This will assist the metal droplet in coalescing away from the insoluble impurities. Use the dropping pipette to draw up the liquid metal, leaving the rest of the impurities in the liquid, and add this droplet to the second test tube so it can be inspected.

The sodium–potassium alloy, commonly known as NaK, is used most famously as a coolant in fast reactors. It has advantages over other coolants in the wide temperature range at which it remains liquid and its low tendency to absorb neutrons.

This demonstration lends itself well to teaching metallic bonding for 14–16 year-olds – such a model would refer to a lattice of positive metal ions that experience an electrostatic attraction to surrounding delocalised valance electrons (download classroom PowerPoint slides).

Students would be expected to connect the radius of the cation as well as its charge and number of delocalised electrons to the melting point of the metal. Given potassium’s larger ionic radius, it’s not surprising to find it has a lower melting point than sodium. Students may predict any mixture of the two metals to have a melting point between that of the two components so it’s a pleasant surprise to see a liquid rather than a solid appear from mixing the two. 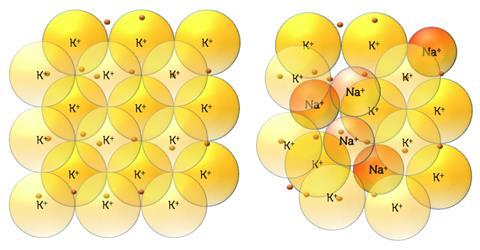 The enthalpy of mixing for mixtures of metals depends primarily on the crystal structures, any difference in electronegativity, valence and the ionic radiuses of the components. Both sodium and potassium have the same valance, face-centred-cubic structures and similar electronegativities, so this leaves the difference in the ionic radius as the primary culprit for the weaker forces observed.

The efficiency of packing cations in the mixture is poorer than that of either pure substance. This can be shown diagrammatically or by making model structures with marbles or coins.