2012 is a modern, 1970s style classic disaster movie. The movie scenario goes something like this: The energy processes in the Sun are being affected by a very unusual planetary alignment. The alterations to these nuclear processes are causing vast quantities of a new type of particle to be emitted, which on interaction with the Earth’s core is heating it up dramatically. This causes the Earth’s tectonic plates to start to move rapidly causing vast earthquakes and tidal waves leading to unfolding chaos. In the film we see our heroes in a car (and later in a plane) speeding out of Los Angeles impossibly close to (but always just in front of) vast chasms splitting and swallowing up everything behind them! So how much, if any at all, does this agree with what we know about the science of the Earth and the nuclear chemistry going on in the Sun? 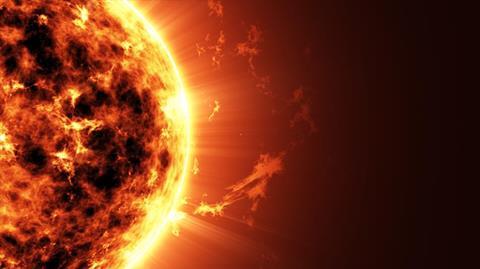 Our Sun is a fairly standard star with core temperatures able to fuse protons in a complex series of reactions known as the p-p cycle. Helium, gamma rays, lots of energy and neutrinos are produced in the fusion process. Neutrinos were first postulated by Wolfgang Pauli and subsequently detected in 1956. Nuclear theory predicts that vast quantities of neutrinos are produced by the Sun but as they have very little mass and no charge their interaction with ordinary matter is tiny. 50 trillion solar neutrinos pass through a human body every second!

In the 1970s a classic experiment was set-up in a mine in USA by an equally classic experimental scientist, Ray Davis.1 Its aim was to detect these illusive neutrinos (νe) by their interaction with chlorine to form argon. If the neutrinos have enough energy (νe > 814 keV) the following reaction is possible:

Using 800 000 pints of cleaning fluid (a cheap source of Cl atoms) and some superb chemistry they were able to detect just ca. 12 Ar atoms being produced per month (that’s 12 Ar atoms in a tank of around 1030 atoms!).1 This was about a 1/3 of what was expected, causing considerable debate among the theoreticians. One explanation for the ‘neutrino number discrepancy’ was that neutrinos might come in three types, or ‘flavours’: electron, muon and tau neutrinos. As the Cl → Ar reaction requires electron neutrinos (νe) this explains why the signal was only a 1/3 of the expected value.1

The film seems to suggest that the planetary alignment is somehow changing the type of neutrinos produced, perhaps to one of the other two types. ‘Flavour’ oscillations, where the neutrinos change type, have been predicted.1 But even if there was some astrophysical mechanism for this there is no reason, given the tiny effect the interactions of these vast quantities of neutrinos have, that there would be any realistic effect on the thermal process going on in the Earth. And certainly not over such a small timescale as the few months, or years of the film.

In summary then: The science is shaky (as if you needed to be told!), so don’t bother moving to the Himalayan high ground just yet.