Poisonous plants such as deadly nightshade produce toxic tropane alkaloids. These chemicals have been exploited in magic, murder and the design of a host of useful therapeutic drugs

Her blood is settled, and her joints are stiff; Life and these lips have long been separated. Death lies on her like an untimely frost Upon the sweetest flower of all the field.

The most likely cause of the narcosis, disorientation and death-like state described in this passage from Shakespeare's Romeo and Juliet  were berries of the deadly nightshade Atropa belladonna, more commonly known as sorcerer's berries, devil's berries or murderer's berries. This plant and its relatives Hyoscyamus niger (henbane), Datura stramonium  (thornapple), and Mandragora officinarum  (mandrake) - all from the Solananceae family - are associated with the most interesting folklore of any plant. They were used by the Ancients to induce narcosis as an adjunct to surgery, and there was often much mystique associated with their collection - the ritual employed when uprooting a mandrake usually involved a dog tied to the plant and the collecting apothecary or necrophile had his ears blocked with wax.

Then on the still night air,
The bark of a dog is heard.
A shriek! A groan!
A human cry. A trumpet sound,
The mandrake root lies captive on the ground. [Anon]

A clear reference to what Shakespeare referred to as:

Shrieks like mandrakes, torn out of the earth,
That living mortals, hearing them, run mad.
[Romeo and Juliet, Act IV, Scene iii] 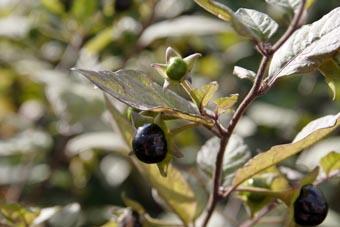 However, it was their toxic properties that endeared them to the arch-poisoners of the time. Swallowing just one black berry from deadly nightshade, the unsuspecting victim could die. In fact all parts of the plant are poisonous by virtue of the tropane alkaloids that they contain - hyoscyamine and hyoscine, the major alkaloids, promote disorientation, euphoria, narcosis, or death depending on the dose.

The notoriety of these plants reached its zenith in the Middle Ages when they were associated with witchcraft. A casual examination of the numerous contemporary woodcuts reveals naked witches astride their broomsticks, and the files of the Inquisition detail how witches would anoint themselves under the arms and other hairy places with the various salves and 'oyntments'. They were in a state of euphoria and disorientation, thinking (according to Porta, a friend of Galileo, writing in 1562) they were being 'carried off to banquets, music, dancing, and coupling with young men which they desire the most'. And then there were the ceremonies associated with the Devil. Whatever happened at these Sabbats, there is no doubting that the witches experienced the full range of pharmacological affects induced by hyoscyamine and hyoscine. These were absorbed through the skin in the armpits and groin, thus guaranteeing a rapid entry of the alkaloids into the bloodstream (and brain) and avoiding the less efficient (and dangerous) gastrointestinal route. Other modes of administration were also used - for instance, inhaling the smoke from smouldering henbane seeds was reputedly used in such diverse locations as the Temple of Delphi and mediaeval bathhouses. 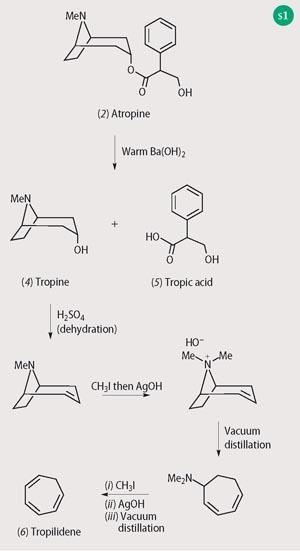 A more recent report of intoxication from the smoke of henbane seeds was provided by Gustave Schenk in 1966:

"My teeth were clenched and a dizzy rage took possession of me. my feet were growing lighter, expanding and breaking loose from my body. I experienced an intoxicating sensation of flying."

This leaves little doubt that the experiences of the witches were certainly not imagined.

In contrast to the frequent association of belladonna, henbane and mandrake with murder and magic, various plants of the Datura family were prized for their medicinal properties, especially in the Middle East and Asia. Here Datura metel  and Datura fastuosa,  often together with cannabis, were smoked to provide an anaesthetic for surgery, but plant extracts had myriad other medical uses. The thornapple (Datura stramonium), also known as Jimson-weed or angel's trumpet, is common in Europe and North America, and though all parts of the plant are toxic, extracts were used by doctors as sedatives. The drug has recently been used by muggers in South America and their victims often have little recollection of being robbed. Cotton Mather, one of the early settlers in Jamestown (hence Jimson-weed), Virginia described the effects of the plant on his fellow settlers:

"Some having eaten plentifully became fools for several days - one would blow
up a feather in the air, another sit naked like a monkey grinning at the rest, and
a third fondly kiss and paw his companions, and sneer in their faces."

All of these physiological effects are the result of a general depression of parts of the nervous system (especially the brain) as the tropane alkaloids compete for acetylcholine receptors of the muscarinic subclass, thus denying access to the neurotransmitter acetylcholine.

Hyoscine (1) (scopolamine in the US) is by far the most potent of the alkaloids since it most easily crosses the blood-brain barrier. The nearest we come to experiencing what the witches felt is if we are given a pre-medication containing scopolamine prior to surgery - the euphoria and disorientation does much to alleviate fear of the surgeon's scalpel. A more accessible benefit of scopolamine can be experienced with anti-sickness plasters and tablets and here the drug decreases motility within the gastro-intestinal tract. This trans-dermal route of delivery can be compared with the route used by the witches.

It is no surprise that the tropane alkaloids and their host plants were among the first to be investigated by scientists in the early 19th century as the newly emergent discipline of chemistry shook off its connections to the increasingly discredited alchemy. Atropine (2) was isolated in pure form from deadly nightshade in the 1830s, though it was subsequently shown to be racemic, the naturally occurring (-)-hyoscyamine (3) racemising during the isolation and purification procedures, so atropine is actually (+/-)-hyoscyamine. Atropine first became popular in the mid-19th century when it was used by ophthalmologists to dilate the pupils, though ladies of the Renaissance (if not before) had already discovered this means of attaining the appearance of a doe-eyed beauty (hence the Italian bella donna).

The structure elucidation of atropine shows how labour intensive such work was prior to the introduction of modern spectroscopic techniques (Scheme 1). Alkaline hydrolysis yielded the alkaloid tropine (4) and also tropic acid (5). Further degradation of tropine via successive Hofmann eliminations from trialkylammonium salts, provided the known compound tropilidene (6). The chemical synthesis of tropinone (7), an oxidation product of tropine, by Sir Robert Robinson in 1917 is remarkable for its efficiency but also as an early example of a biomimetic synthesis, ie  one modelled on what was guessed to be the pathway of biosynthesis within the plants (Scheme 2). An initial condensation between butane 1,4-dialdehyde, methylamine and the calcium salt of acetone dicarboxylic acid was followed by a double decarboxylation to yield tropinone in an overall yield of 40 per cent.

The tropane alkaloids are also remarkable because they have served as lead structures for the design of a host of useful therapeutic drugs. For example, ipratropium bromide (8) (Atrovent) is a bronchodilating agent, and used to treat chronic obstructive pulmonary disease, but is almost devoid of the CNS (central nervous system) affects exhibited by atropine. In addition, tropic acid has also served as a platform for drug design. In 1922 Julius von Braun showed that the bicyclic ring of atropine could be replaced by a piperidine ring with retention of the mydriatic effect in the eye, and the drug Navigan (9), marketed by Hoffmann-LaRoche in 1929, was found to have excellent activity in the prevention of travel sickness. Reorganisation of the structure provides the analgesic, pethidine (10), which is used for pain relief during childbirth since it has a relatively short lifetime in the body and also has less effect on foetal respiration than other analgesics. Further iteration of the structure yields haloperidol (11), first prepared in 1958, which is a sedative and tranquilliser, and is still used as an anti-psychotic drug.

Atropine is still the standard antidote for nerve gas poisoning since these agents induce a build-up of the neurotransmitter acetylcholine (ACh) through inhibition of acetylcholine esterase, the enzyme that deactivates AcCh. By blocking the muscarinic AcCh receptors, atropine overcomes the effects of the nerve gas, and is standard issue for troops in war zones where these agents may be deployed.

The newer drug structures are less obviously related to the tropane skeleton but this did provide the initial structural model for these important drug classes. The pharmaceutical industry has made excellent use of drugs whose origins can be traced back to the tropane alkaloids, which also includes cocaine, but that's another story.1