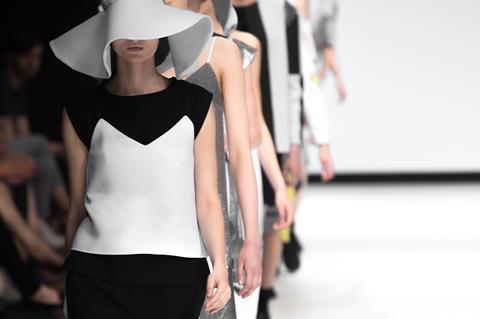 Wonderland, which opened at the London School of Fashion in January for two weeks, exhibited beautiful dresses that disappeared in a giant bowl of water before the public's eyes, setting off underwater fireworks as they dissolved. Does such imagery merely reflect a division between the worlds of art and science, or is there another more poignant message?

We live in a throwaway society. We use myriad materials every day in all sorts of ways, giving little thought to where these materials came from or where they will end up. Plastics and increasingly cheap clothing, in particular, are metaphors for waste. With landfill sites reaching crisis point and oil resources dwindling, few people would argue that we all need to become more responsible in the way we use and dispose of such materials. But how do we get people to think differently about materials, to think in terms of sustainability and recycling?

The fashion designer and the chemist

A chance encounter between fashion icon Helen Storey and Tony Ryan, ICI professor of physical chemistry at Sheffield University, led to a solution that exploits the glamorous world of fashion with the equally creative world of chemistry.

Twenty years ago Helen Storey was designing clothes for Cher and Madonna, but is now more interested in finding solutions to problems such as plastics pollution and world water shortages. Recently she was working with a packaging company, trying to come up with some radical ideas for plastic packaging that would address plastics waste. 'Why can't a plastic bottle know when its contents have disappeared and signal the time for the bottle to disappear?', she asked herself.

Later, listening to the radio 4 programme, Material World, she heard Tony Ryan talking about smart polymers, so she contacted him to find out whether he could shed any light on the problem. He invited her to the department of chemistry at Sheffield and an alliance formed that, with funding from the Engineering and Physical Sciences Research Council's (EPSRC) public engagement of science programme, has recently culminated in Wonderland. The exhibition of dissolvable textiles has an underlying message on sustainable materials, and has seen the chemist and the fashion designer go on to develop a water purification system for people in the developing world. Ryan told Infochem, 'We are both keen to get people to think about the way they use materials and to use them more responsibly. But rather than preach about it, we realised we could reach a wider group of people by using fashion and glamour'.

Ryan knew of a polymer that was dry to touch, making it suitable to work up into dresses, and would dissolve in water. 'Helen would be able to make beautiful gowns in which we could embed all sorts of chemistry, and they would obey the second law of thermodynamics and dissolve'. This polymer, he explained, is used to form the clear pouches that hold laundry and dishwashing liquids, and dissolves in water. Detergents comprise salts which are attracted to water more than the polymer is - the water in the liquid detergent is bound so strongly by the salt ions that only when the polymer is in large amounts of water, as is the case in a washing machine or dishwasher, will it dissolve.

The polymer is polyvinyl alcohol (PVA), but because the monomer, vinyl alcohol (ethenol, CH2 =CH(OH)), doesn't exist on its own (it coexists in equilibrium with its isomeric ketone, CH3CHO), PVA is made by polymerising vinyl acetate (ethenyl ethanoate), followed by a saponification reaction. The latter step cleaves the ester, via hydrolysis, to form the alcohol. The result is a copolymer of vinyl alcohol and vinyl acetate, the relative amounts of which can be varied by controlling the saponification reaction. The more acetate, the less soluble in water is the copolymer; the more alcohol, the more soluble in water is the copolymer. The temperature at which the copolymer dissolves can thus be controlled by changing the relative amounts of acetate and alcohol.

So the polymer, explained Ryan, could be used to make a bottle that when empty could be filled with boiling water, which would dissolve the polymer and on cooling would form a gel if a crosslinking molecule, such as borax (disodium tetraborate(iii)-10-water), was added. If the cap of the bottle were designed like a pepper pot and contained flowering or herb seeds and rooting compound, then where once you had a plastic bottle which you would have thrown away, you could have flowers or herbs growing instead.

To add to the artistic effect of the dissolving dresses at the exhibition, Ryan provided the designers with 'underwater fireworks', which could be incorporated in the buttons. Small pouches, made of the same copolymer are filled with equal amounts of bicarbonate of soda (sodium hydrogen carbonate) and sodium citrate (the sodium salt of citric acid, 2-hydroxypropane-1,2,3-tricarboxylic acid), and a solid dye. As water leaks into the pouch, the bicarbonate of soda and sodium citrate react, producing carbon dioxide gas, which fires the dye into solution, producing coloured streamers in the water as it sinks. A giant magnifying glass bowl to hold the water adds to the effect. Ryan comments, 'People will ask, "why are you destroying those beautiful gowns?" and we will say: "to make you think about how you are slowly destroying the planet by throwing away materials". And because we want them to think in new ways about materials, plants are seen growing from the gooey gel that the dresses have changed into'.

Storey designed the dresses and her team made up the garments using lasers to cut the 'fabric' and specially designed heat sealers - essentially a wheel on the end of a soldering iron - to bond seams together. Intricate patterns, similar in appearance to lace, could be cut out using the lasers.

Tony Ryan is well known in the chemistry community for his work on polymers. The focus of his recent research has been in the development of nanoscale (10-9 m), synthetic muscle, which has the potential to be used as molecular motors for the electronics industry, in robotics for example. For this he uses a polymer with ionic side groups, the ionic nature of which can be switched 'on' or 'off' by changing the pH of its environment.

In its ionic state, at pH 4-6 (in a weak acid), the polymer attracts water and swells up, and in its non-ionic state (at low pH) the polymer loses water and collapses. 'By separating the weakly and strongly acidic solutions with a membrane (thus creating an osmotic pressure between the two solutions) we can change the pH of the environment of the polymer', explains Ryan, 'and get the synthetic muscle to change shape and thus do work'.

While talking to the artists about his work, Ryan tells them how, in a similar system, the osmotic pressure between two liquids can be exploited to provide clean drinking water for soldiers in Iraq and Afghanistan. 'The soldiers have a bag made of regenerated cellulose (the membrane) containing salts and sugar', he says. 'When they come across a stream or a pool of dirty water, the soldiers fill up their bags, and the osmotic pressure created by the salt/sugar solution pulls clean water through the membrane. Intrigued, the artists ask, 'could you use the same materials that you use for your synthetic muscles in a water purification system?.'

In collaboration with the artists, Ryan and his team at Sheffield have developed a water purification 'pillow' based on 'synthetic muscle', that could be used by the military and people in developing countries. In dirty, contaminated water, the polymer electrolyte absorbs pure water across a membrane and swells up. To release the water, simply apply a pressure that is bigger than the osmotic pressure and the water comes out - take the membrane away and squeeze the gel. The portable system has been awarded a patent and Ryan is currently seeking venture capital to develop the prototype for the market.

The Wonderland exhibition will be in Sheffield in a city-wide event at Meadowhall, the University of Sheffield, the Botanical Gardens, and the Millennium Galleries between 18 June and 13 July; and in Belfast at the Ormeau Baths Gallery, 7 October to 9 November.

The properties of carbon nanotubes are determined by how the graphene sheet rolls up. In highly symmetric tubes like the 'armchair' variety, the electron orbitals of the carbon atoms overlap strongly and electrons flow very easily; these nanotubes conduct like metals. Twisted 'chiral' tubes have low symmetry, resulting in weak orbital overlap between carbon atoms which makes it difficult for electrons to flow, and are only semiconducting.