Parenting, working at home and ‘educating’ her three kids is almost enough to tip Siobhan Godwood over the edge 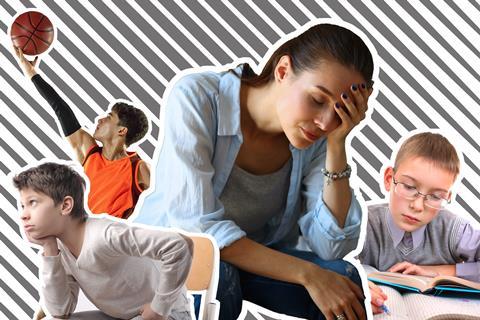 There are many reasons I didn’t choose to be a teacher. I’m far from patient, and can’t get my head around the fact that things that are obvious to me, like French verbs, may not be immediately comprehensible for an 11-year old. I like being a parent (sometimes), but my capabilities as an educator don’t stretch beyond the odd bit of homework help – and then only really in English, history and French. At a push, I can manage some RS, and am also confident on oxbow lakes and the parts of a plant cell.

So when Boris Johnson popped up on Wednesday 18 March and informed me that henceforth, and until further notice, my children would be receiving their education not in their lovely school but in my house, where from now on I would also be working, I was not delighted.

All in this together

My boys are 17, 14 and 12 – so English school years 12, 9 and 7. This, theoretically, means they are old enough to organise their work, find assignments online and submit them. My husband and I are also working from home, determined not to be distracted by squabbles over laptops and meltdowns over irregular French verbs.

It’s clear by lunchtime on day one that we don’t have enough chairs that don’t destroy our coccyxes. Using a laptop in bed is a tempting solution, but my years as a freelance writer have taught me that very little good work gets done in a semi-horizontal position. An outing to two workplaces to ‘borrow’ office chairs yields results, and by day two, no one has an excuse to be anywhere near bed during ‘school’ hours.

Laptop sharing is also tricky. We only have one, and now that all work is being set on Seneca, MyMaths, MathsWatch, Show My Homework, etc, it’s a nightmare. In the two days before school closed, I kept barking ‘if you’re offered printouts, FOR GOD’S SAKE TAKE THEM!’ But that was weeks ago. Those printouts are long gone. Occasionally I consider buying another laptop, then remember that we are clinging on to our jobs by our fingernails and decide against it.

Don’t stop till you get enough

The school closures were as much of a shock to educators as they were to parents, so it’s not surprising no one knows how much work to set. Boy 3 does a lot of subjects, so we’ve had frequent tears over how many tasks he has to do. It’s hard for a 12-year-old to prioritise. His dad says maths and science are the most important. I say English, history and French are. Poor old dance and drama aren’t getting a look in.

Strangely – or entirely predictably, if you’d met my kids – the amount of work being done is in inverse proportion to age. The kid who’s supposed to be doing his A-levels this time next year? Barely lifting a pen. Middle child, middle-sized effort. The little one spent his Easter break catching up on eight English assignments, a maths test and a history project on Richard III.

It’s PE, but not as we know it

Exercise has been a challenge – it’s tough dragging stroppy teenagers out from under duvets and away from screens. But from the first day I insist time outdoors moving about is compulsory, and thank the universe daily for our basketball hoop. Playing ‘killer’ in the garden at lunchtime is the only thing we can do together without bickering.

Another unlikely lifesaver has been Joe Wicks. Boy 3 was assigned one of his YouTube PE sessions for school, and it quickly become part of our routine, although the moves named after Fireman Sam are a teensy bit infantilising. We’re not up for the 9am livestreaming, though; no teenagers can do star jumps that early.

The first two weeks were hard, but we got to the Easter holidays, and I’m hopeful that the time off and endless feedback surveys we’ve all completed will mean things run more smoothly this term.

I take my hat off to the teachers out there. They’re all working incredibly hard to ensure this weird situation doesn’t have too much impact on our children’s education, and our sons’ tutors have all called or emailed to see how the boys are coping. But I still lie awake at night, fantasising about the day when once again I can wave my boys off in the morning, confident that their education is safe in the hand of the professionals. I will never take it for granted again.