Hot particles: could you blow up the Vatican with antimatter? 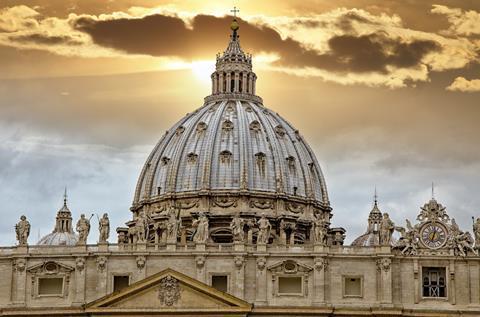 In the film Angels and Demons, the recent death of the pope has brought together a special meeting of cardinals in Rome. Meanwhile the ancient order of the Illuminati is threatening to blow them up using ‘antimatter’ recently stolen from CERN’s Large Hadron Collider in Geneva. In one scene we see the collider making, isolating and storing the antimatter in what looks like a hand-held battery-powered magnetic vacuum flask. Is this possible, and could you really make a bomb from antimatter?

CERN accelerates and collides particles at fantastic energies to produce all sorts of exotic particles, including antiparticles. However the lifetimes of these particles are very short: you can’t simply bottle the products! You would have to isolate the antimatter because if it came into contact with ordinary matter they would immediately annihilate each other.

In the film the antimatter (probably antihydrogen) would consist of charged nuclei, like a sort of plasma. High-temperature plasmas can be safely isolated within a high vacuum apparatus using strong magnetic fields but this is something that needs a lot of power and complex vacuum systems. So a hand-held device like that shown in the film is not yet plausible.

When a proton (hydrogen) meets an anti-proton (antihydrogen) they annihilate each other, converting their mass into energy by Einstein’s equation E = mc2, where c is the speed of light and m is the total mass converted. A small amount of mass can produce a great deal of energy and so given enough antimatter a large explosion could indeed be created.

If we assume all the antimatter is released and annihilates with ordinary matter, creating energy, we get:

Since half of this is matter and half antimatter we would have ca 0.12 g of antimatter.

Now 1 mole of antihydrogen or hydrogen (1 g) would contain Avogadro’s number of particles, so 0.12 g would have about 7 x 1022 ‘atoms’ of antihydrogen. The volume of the containment flask shown in the film looks a few ml, which at first seems reasonable. However, CERN estimates that their state-of-the-art systems can only contain 1012 charged antiparticles; millions and billions of times less than the little hand-held device in the film is supposed to be containing.

In the film all this antimatter was made in the first few seconds of running the large Hadron collider. However, according to CERN they can produce (only) 107 antihydrogen per second – at that rate it would take 230 million years to make the antimatter required in the film. So all in all, it’s good news for the angels and bad news for the demons.

Antimatter is a form of matter in which each particle has the opposite set of quantum properties – eg electric charge – to its opposite in the everyday world. So an antielectron, for example, has the same mass as an electron but a positive charge instead of a negative one. The existence of antimatter was predicted by Paul Dirac in the late 1920s. An excellent journey into the world of particle physics is given in John Gribbin’s book Q is for quantum: particle physics from A to Z, published by Phoenix Giant.