House party: could you float a house with helium balloons? 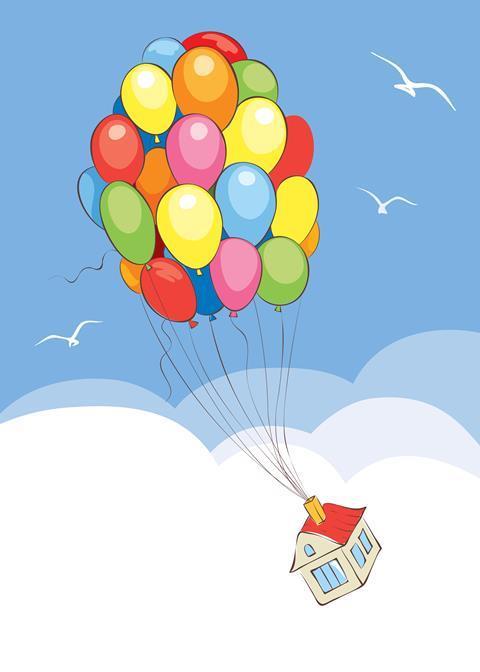 In the cartoon, Up, 78-year old Carl Fredicksen is about to be taken away by social services to a rather depressing old folks’ home but he escapes by attaching thousands of helium balloons to his house and floating away. Could you do this in real life?

Amazing as it sounds, in July 2007, Fox News in the US reported that ‘gas station owner’ Kent Couch tied 105 very large helium balloons to a chair and took to the skies for nine hours, flying 193 miles. According to the news report, Couch was the latest American to emulate Larry Walters who, in 1982, rose three miles above Los Angeles in a chair lifted by helium balloons. So, on a small scale it looks feasible but how many helium balloons would you need to pick up a house?

Helium is far less dense than air which is why a He balloon rises, the difference in density (Δρ) gives us the lift:

American houses are often made of wood rather than brick. A typical three-bedroom wooden house shown in the cartoon would weigh 10 000–25 000 kg. Since each helium balloon creates about 10 g of lift you would need at least 10 000 000/10 balloons – ie about a million balloons to lift the house!

So, according to our simple calculations the thousands of balloons we see in the cartoon would be enough to lift a large garden shed but not, unfortunately, enough to lift a full-sized house…