The powdered bark of the South American cinchona tree is the source of quinine - the mainstay treatment for malaria for centuries. The structural elucidation of this fascinating molecule can be traced back to the work of German chemist Paul Rabe just over 100 years ago. 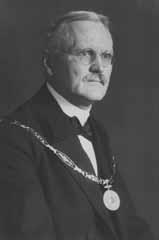 Father Antonio de la Calancha, a Jesuit priest living in 17th century South America wrote in the Chronicle of St Augustine  in 1633 of a 'tree which they call "the fever tree" whose bark made into a powder amounting to the weight of two small silver coins and given as a beverage, cures the fevers and the tertians'. (Tertians was the name for the three-day cycle of one form of malarial fever.) The Inca name for this tree was  quina  but there is no evidence that they recognised its value for the treatment of malaria, but simply for its ability to prevent cold-induced shivering. It was the Jesuit missionaries who first used the powdered tree bark for treating malaria and so it became known as Jesuits' powder. Cardinal Juan de Lugo pioneered its use in the middle of the 17th century in Rome at a time when Rome was surrounded by marshland where malaria was endemic.

By the 1660s Jesuits' powder had found its way to England, where it was being prescribed by the English physician (quack) Robert Talbor for treating malaria. He clearly did not want to reveal the source of his medicine, and warned his patients of the dangers associated with Jesuits' powder and other 'palliative cures' that they might obtain from other local physicians.

But his medicine obviously worked and Charles II appointed Talbor court physician in 1678 just in time for him to cure the king of a bout of malaria one year later. Talbor went on to treat successfully Louis XIV's son and made a lucrative deal to reveal his potion after his death. In the event his 'secret remedy' turned out to be Jesuits' powder and wine, a combination that was already in regular use by the famous physician Thomas Sydenham (friend of Robert Boyle and other Oxford worthies like Christopher Wren). His alcoholic brew must have been very popular: 'mix an ounce of bark with two pints of claret and give it. in doses of eight or nine spoonfuls.'

The first clear identification of the fever tree is usually accredited to the adventurer and astronomer Charles-Marie de la Condamine in 1737. Five years later the Swedish botanist Linnaeus gave it the name 'cinchona'  probably because he had heard the fable about the Countess of Chinchon, the wife of the Spanish viceroy of Lima, who had allegedly been cured of malaria through use of the powdered bark.

During the ensuing 80 years several attempts were made to isolate a pure active principle from the cinchona bark but all failed. In 1819 Friedrich Ferdinand Runge isolated what he called 'China base', and one year later Pierre-Joseph Pelletier and Joseph-Bienaim? Caventou extracted a substance from the bark of  Cinchona cordifolia  with acid followed by neutralisation with alkali and obtained an identical substance to 'China base', which they called quinine. Samples of this pure cinchona alkaloid were made available to clinicians in Paris hospitals and soon several of them were reporting the efficacy of quinine as a treatment for malaria.

By 1826 Pelletier and Caventou were producing in excess of 3500 kg of quinine sulfate each year. This required vast quantities - more than 150,000 kg - of cinchona bark, and in 1880 Colombia alone was exporting six million pounds of bark to Europe each year. To safeguard their interest, the exporting countries - Colombia, Ecuador and Peru - banned the export of cinchona seeds, and this encouraged people to try and smuggle the seeds out of these countries.

Justus Hasskarl, the director of the Dutch Botanic Gardens in Java did succeed in smuggling seeds out of Colombia but these failed to thrive in Java. The British explorer Richard Spruce and his companion Clements Markham managed to export 100,000 seeds and though these did provide quinine-producing trees in various colonial plantations in India and Ceylon, none of the trees were high-yielding varieties. In the end, it was the English entrepreneur Charles Ledger who provided the seeds that were used to initiate quinine production in the Far East.

In 1865 Ledger persuaded his Indian servant Manuel Incra Mamami to help him obtain seeds from a Bolivian variety of the cinchona tree that was reputed to produce a large amount of quinine. Ledger escaped with the seeds but Mamami was less fortunate, he was arrested and then tortured to death by Bolivian officials. The UK Government, however, refused to buy Ledger's seeds because of the earlier bad experience with Spruce's seeds; and it was the Dutch who eventually bought a bag of them for (allegedly) 100 guldens and shipped these to Java. These seeds produced cinchona trees (later christened  Cinchona ledgeriana) with an amazing 13 per cent of quinine in the bark.

By the 1930s the Dutch were providing more than 20 million pounds of bark each year, which was enough to supply 97 per cent of the world's requirements for quinine. This Dutch monopoly lasted until 1942 when the Japanese invaded the islands of Indonesia, including Java, and the West was starved of its major supply of quinine. By now there were some new synthetic analogues like pamaquine and mepacrine, but none the less, efforts to prepare synthetic quinine began in earnest.

As early as 1849, August Wilhelm Hofmann, director of the Royal College of Chemistry in London had speculated that quinine could be formed by oxidative condensation of two molecules of  N -allyl toluidine, and in 1856 he set one of his students - William Henry Perkin - the task of doing the reaction. Perkin obtained only an intractable mixture of products, and so to gain an insight into the reaction, he decided to use a simpler amine. He repeated the experiment with what he thought was aniline (phenylamine) but was in fact aniline contaminated with  ortho- and  para -methyl anilines. This time he obtained a soot-like powder. After removal of its tarry component, extraction with alcohol yielded a beautiful purple solution, the crystals from which he christened mauveine, which proved to be an excellent purple dye. His fortune and fame were ensured. Another 90 years were to pass before a total synthesis of quinine was achieved.

Prior to Perkin's work, in  ca  1853, Louis Pasteur, as part of his pioneering work on characterising the stereoisomeric forms of tartaric acid, tried (and failed) to separate the enantiomers using quinine but then treated quinine with dilute sulfuric acid, which gave a new degradation product that was later called quinotoxine. Unravelling the chemistry underlying this degradation was eventually done by the German chemist Paul Rabe, working at the Chemical State Laboratory, Hamburg, just over 100 years ago in 1908. Rabe correctly deduced that quinotoxine (1) could be derived via an acid-catalysed rearrangement followed by an enol to keto tautomerism, thus providing the first evidence for the structure of quinine (2), Scheme 1. 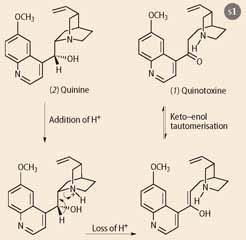 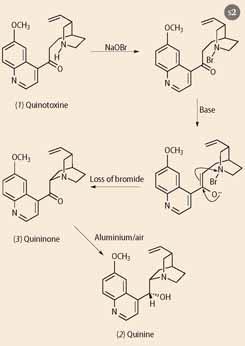 Over the next 10 years Rabe laboured to convert quinotoxine into quinine in a synthetic sequence that has for a long time been considered to be somewhat dubious, because he never eluded to the full experimental conditions. His synthesis involved a three-stage conversion of quinotoxine (Scheme 2) first to the  N -bromo-compound (using sodium hypobromite), followed by reaction with base (sodium ethoxide in ethanol) to give quininone (3). These two steps have now been repeated by Aaron Smith and Robert Williams of Colorado State University and recently reported in Angewandte chemie, (2008, 47, 1736-1740). Then they encountered problems. In the final stage of his synthesis Rabe used aluminium powder to reduce the ketone to the desired alcohol, but Smith and Williams, using pure aluminium powder, could not reproduce Rabe's result. However, reasoning that aluminium powder in 1918 was likely to be less pure than the modern product, and would probably have been oxidised by exposure to air, Smith and Williams exposed their aluminium powder to air. The reduction proceeded, providing quinine in 14 per cent yield, and this little bit of chemical detective work has finally established the veracity of Rabe's claim to have made quinine.

What this means is that the synthesis of quinine reported by Robert Burns Woodward and William von Eggers Doering in 1944, was in reality only a 'formal' synthesis of quinine since they produced quinotoxine and assumed that it could be converted into quinine using Rabe's (unpublished) methods. None the less, coming at a time when American GIs were stuck on malaria-infested Pacific islands engaged in bitter fighting with the Japanese, Woodward and Doering's accomplishment was hailed as a lifesaver. However, their synthesis could not be scaled-up and therefore was not the solution. The race to prepare synthetic quinine during World War II was matched by efforts to find replacement drugs for this relatively toxic compound.

A later synthesis in the early 1970s by chemists at Hoffmann-La Roche led by Milan R. Uskokovic did provide quinine in reasonable quantities, and subsequent total syntheses by Gilbert Stork in 2001, and by Eric Jacobsen and Yuichi Kobayashi (both reported in 2004) have ensured that quinine can be prepared by concise and stereoselective routes.

Quinine - with ice and a slice

Despite these triumphs of the synthetic chemists, all of our current quinine is derived from cinchona bark as it was in the 19th century, and about 60 per cent of it is used in tonic waters to impart a bitter taste to gin and other drinks (Schweppes first introduced Indian tonic water in the late 1870s). Its use as an antimalarial has long been superseded by less toxic synthetic drugs like mepacrine (1932), chloroquine (1939), primaquine (1946), mefloquine (Lariam, 1979), and the derivatives of artemisinin from the Chinese plant  Artemisia annua.  However, despite these substitutes for quinine, we should not forget that the exploration and exploitation of Africa and Asia in Victorian times would not have been possible without quinine. And, during the many colonial wars fought by the British army during the last 25 years of the 19th century, tropical diseases (including malaria) were responsible for 10-20 times more deaths than caused by military action. The British army was certainly still using quinine throughout World War II. So, just over 100 years after Paul Rabe's elucidation of the structure of quinine we should still celebrate this fascinating molecule, even if we only take it with our gin and tonic.

In 1925 the German company Bayer had discovered the effective antimalarial pamaquine (4, Plasmoquine) as part of a large programme in which hundreds of quinolines (the basic ring system of quinine) were prepared. Other German research by I. G. Farbenindustrie, which had taken over the Bayer laboratories, demonstrated the superior activity of the acridine mepacrine (5, Atebrin) around 1930. With the approach of war in the late 1930s, several British and US companies sought to make mepacrine, and by the outbreak of hostilities in 1939 both countries were manufacturing quantities of this drug. 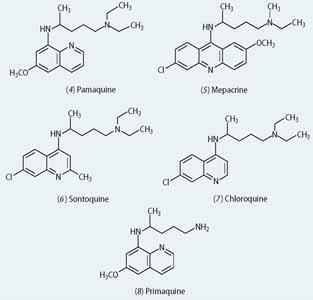 In the meantime, the Germans had discovered another key antimalarial, sontoquine (6), a chloroquinoline. Samples of this drug were obtained from captured German soldiers in the North African desert campaign in 1942 and sent to the US for structure elucidation. Subsequently, from the many analogues that were prepared, chloroquine (7) proved to have the best activity profile, and became the mainstay of antimalarial prophylaxis in the post-war years.

Finally, another US programme undertaken during the war years, in which over 14,000 compounds were screened, identified primaquine (8) as the best agent for the treatment of non-cerebral malaria. This structure bears an uncanny resemblance to the first commercial antimalarial pamaquine.